Tony Lawson is a British philosopher and economist. He is professor of economics and philosophy in the Faculty of Economics at the University of Cambridge. [1] He is a co-editor of the Cambridge Journal of Economics , [2] a former director of the University of Cambridge Centre for Gender Studies, and co-founder of the Cambridge Realist Workshop and the Cambridge Social Ontology Group. [3] Lawson is noted for his contributions to heterodox economics and to philosophical issues in social theorising, most especially to social ontology. [4]

Lawson's early contributions were on philosophical topics such as uncertainty, knowledge and prediction as well as on substantive analyses of the labour process and the industrial decline of the United Kingdom. [5] [6] [7] Lawson's further work has focussed on achieving greater relevance in social theorising, especially economics. This has involved developing an ontologically informed critique of mainstream economics and elaborating methods more relevant to social analysis. Perhaps most importantly, Lawson has introduced ontological reflection into all aspects of economic discussion, including methodology, basic theory and history of economic thought. [8] [9] [10] [11] [12] [13] Lawson argues repeatedly that if social science is to be successful then it must fashion methods that are appropriate to its subject matter. [14] He argues that this requires an explicit orientation to social ontology. The reason that mathematical modelling in economics fails to provide insight, he reasons, is simply because such methods are quite inappropriate, given the nature of social material. [14] [15] Lawson develops dialectical methods that he systematises as contrast explanation. More basically Lawson advocates pluralism in method for modern economics. [4] [16]

As a result of his argument that economics should concern itself with ontology, Lawson has developed and defended his own theory of the constitution and nature of social reality. [3] The main philosophical influence for this is the Cambridge Social Ontology Group. An early influence was the work of Roy Bhaskar. [17] [18] [19] Indeed, in his early work, Lawson joined Bhaskar and others in referring to the account of social reality defended as "transcendental realism". [14] Since 1997, however, Lawson has developed his own conception of social ontology, largely in collaboration with the Cambridge Social Ontology Group, and refers to it as social positioning theory.

Lawson's conception of social ontology has been in part derived through transcendental argument. [14] He defines as social anything "whose formation/coming into existence and/or continuing existence necessarily depend at least in part upon human beings and their interactions”. [3] Lawson argues that there is a level of emergent – from human interaction – reality that is reasonably demarcated as social. [20] This comes about through processes of social morphogenesis. [21] In general, Lawson argues, “we human beings for the most part do not create social reality, but rather, on finding it given to us at each moment, each draw upon it in acting in always situated ways, pursuing our particular situated concerns, in conditions clearly not of our own making, with understandings that are always fallible and extremely partial at best, and in so doing thereby contribute, along with the simultaneous actions of all others, to the continuous reproduction and transformation of social reality in a manner that is mostly unintended and poorly understood”. [22]

The result is a world in which human agency and social structure each presuppose the other though neither is reducible to, or completely explicable in terms of, the other. More specifically, Lawson argues that social reality is everywhere constituted through positioning people and things as components of social totalities, whereupon human actions and uses of positioned objects are guided by rights and obligations associated with the positions. Whole communities can also be so positioned, as in the formation of corporations. The result is a social realm organised by various forms of social structure of which there different types such as communities, collective practices, norms, social rules, social positions, powers, social relations, and artefacts. [13] [15]

Lawson defends a conception of ethics named Critical Ethical Naturalism in which the goal is a society in which we all flourish in our differences, and the mechanism ever nudging us towards it turns on the fact that the flourishing of any one of us depends on the flourishing of all and at some level we all recognise this. [23] [24]

Lawson has engaged in debates with numerous contributors, including, early on, over the use of econometrics, and later, regarding the value of ontology to social theorising, including to feminist theorising. In addition, Edward Fullbrook’s Ontology and Economics: Tony Lawson and his Critics, contains a series of debates between Lawson and leading heterodox economists. [25] Recently Lawson has debated the relative advantages of competing conceptions of social ontology with several ontologists such as John Searle, Doug Porpora and Colin Wight. [22] Moreover, he has debated the nature of specific social existents, such as money, with Searle and Geoffrey Ingham. [26]

Political economy is the study of production and trade and their relations with law, custom and government; and with the distribution of national income and wealth. As a discipline, political economy originated in moral philosophy, in the 18th century, to explore the administration of states' wealth, with "political" signifying the Greek word polity and "economy" signifying the Greek word οἰκονομία. The earliest works of political economy are usually attributed to the British scholars Adam Smith, Thomas Malthus, and David Ricardo, although they were preceded by the work of the French physiocrats, such as François Quesnay (1694–1774) and Anne-Robert-Jacques Turgot (1727–1781). 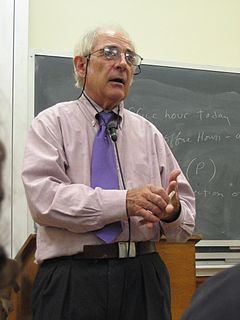 John Rogers Searle is an American philosopher. He was Willis S. and Marion Slusser Professor Emeritus of the Philosophy of Mind and Language and Professor of the Graduate School at the University of California, Berkeley. Widely noted for his contributions to the philosophy of language, philosophy of mind, and social philosophy, he began teaching at UC Berkeley in 1959.

Socioeconomics is the social science that studies how economic activity affects and is shaped by social processes. In general it analyzes how modern societies progress, stagnate, or regress because of their local or regional economy, or the global economy. Societies are divided into three groups: social, cultural and economic. It also refers to the ways that social and economic factors influence the environment.

In the social sciences there is a standing debate over the primacy of structure or agency in shaping human behaviour. Structure is the recurrent patterned arrangements which influence or limit the choices and opportunities available. Agency is the capacity of individuals to act independently and to make their own free choices. The structure versus agency debate may be understood as an issue of socialization against autonomy in determining whether an individual acts as a free agent or in a manner dictated by social structure.

The National Innovation System is the flow of technology and information among people, enterprises and institutions which is key to the innovative process on the national level. According to innovation system theory, innovation and technology development are results of a complex set of relationships among actors in the system, which includes enterprises, universities and government research institutes.

Performativity is a concept that can be thought of as a language which functions as a form of social action and has the effect of change. The concept has multiple applications in diverse fields such as anthropology, social and cultural geography, economics, gender studies, law, linguistics, performance studies, history, management studies and philosophy.

Relationalism is any theoretical position that gives importance to the relational nature of things. For relationalism, things exist and function only as relational entities. Relationalism may be contrasted with relationism, which tends to emphasize relations per se.

Ugo Pagano is an Italian economist and Professor of Economic Policy at the University of Siena (Italy) where he is also Director of the PhD programme in Economics and President of S. Chiara Graduate School.

Katherine Jane Humphries, CBE FBA, is a Fellow of All Souls College, University of Oxford with the Title of Distinction of professor of economic history. Her research interest has been in economic growth and development and the industrial revolution. She is the former president of the Economic History Society and the current vice-president of the Economic History Association.

Critical realism is a philosophical approach to understanding science developed by Roy Bhaskar (1944–2014). It combines a general philosophy of science with a philosophy of social science. It specifically opposes forms of empiricism and positivism by viewing science as concerned with identifying causal mechanisms. Also, in the context of social science it argues that scientific investigation can lead directly to critique of social arrangements and institutions, in a similar manner to the work of Karl Marx. In the last decades of the twentieth century it also stood against various forms of 'postmodernism'. It is one of a range of types of philosophical realism, as well as forms of realism advocated within social science such as analytic realism and subtle realism.

Geoffrey Ingham is a British sociologist, political economist, and author of books on capitalism and money. 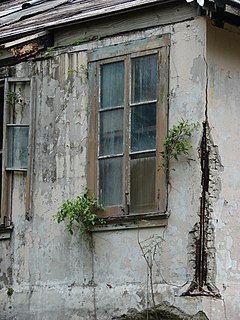 Philosophy of ecology is a concept under the philosophy of science, which is a subfield of philosophy. Its main concerns centre on the practice and application of ecology, its moral issues, and the intersectionality between the position of humans and other entities. This topic also overlaps with metaphysics, ontology, and epistemology, for example, as it attempts to answer metaphysical, epistemic and moral issues surrounding environmental ethics and public policy.

Jill Rubery is a Professor of Comparative Employment Systems at Alliance Manchester Business School (AMBS) at the University of Manchester. Her research focuses on comparative analyses of employment systems with a specialisation in gender and labour market structure. She was made a fellow of the British Academy in 2006.