Tony Vargas (born September 2, 1984) is a member of the Nebraska Legislature. Vargas represents the 7th district, which covers all of downtown Omaha and much of southeastern Omaha.

Vargas was born to Antonio and Lidia Vargas in New York City, who were originally from Peru. He was the youngest of three brothers. [1] He graduated from the University of Rochester and received a MS in education from Pace University. Vargas is a former public school teacher. He previously served as an Americorps fellow through Teach for America.

Vargas was appointed to the Omaha Public Schools Board in 2013, following the resignation of a board member. In 2016 he ran for the Legislature against incumbent senator Nicole Fox. Fox, a Republican, finished third in the nonpartisan primary, which saw Vargas and former senator John Synowiecki advance to the general election. [2] [3] [4] [5] [6] Vargas defeated Synowiecki in the general election with nearly 62% of the vote. He is the first outright elected Hispanic legislator in Nebraska.

In 2018, Vargas was one of 59 individuals selected as a Presidential Leadership Scholar, a bipartisan national leadership program championed and led by President George W. Bush and President Bill Clinton. [7]

In 2017, Vargas was selected by the Omaha Jaycees as one of the Ten Outstanding Young Omahans (TOYO) and by the United States Junior Chamber as a Top Outstanding Young American (TOYA). In 2019, Vargas was selected by the Council of State Governments (CSG) as a Henry Toll Fellow. The Toll Fellowship Program selects 48 of the nation's top officials from all three branches of state government to participate in one of the nation’s premier leadership development programs for state government officials.

In 2020, Vargas was named by the Council of State Governments (CSG) as an inaugural 20 Under 40 Leadership Award recipient, recognizing the outstanding work of 20 up-and-coming elected and appointed officials from across the country who not only exemplify strong leadership skills but have also demonstrated a true commitment to serving the citizens of their state/territory. [8] In 2020, Vargas was awarded the State Service Leadership Award by the America's Service Commissions (ASC), a nonprofit, nonpartisan association representing the 52 state service commissions across the United States and territories with the mission to lead and elevate the state service network. [9]

In 2021, Vargas was one of 24 individuals from across the nation selected to be part of the 2021 Civil Society Fellowship: A Partnership of the Anti-Defamation League (ADL) and the Aspen Institute. This Fellowship, aims to prepare and engage our country's next generation of community and civic leaders and problem-solvers from across the political spectrum to build a more civil society. [10]

Vargas is married to his wife Lauren. He is a Catholic and resides in the Little Italy neighborhood of Omaha. He has two children, one boy and one girl, both born and raised in Omaha, Nebraska. [11]

Debra Strobel Fischer is an American politician serving as the senior United States Senator from Nebraska since 2013. She was elected to the Senate in 2012 and reelected in 2018. Fischer served two terms in the Nebraska Legislature, representing a rural district in the Sandhills, from 2005 to 2013. She is a member of the Republican Party and the first woman elected to a full term as a U.S. senator from Nebraska.

John Synowiecki is a Nebraska former state senator from Omaha, Nebraska in the Nebraska Legislature and the former program director for governmental relations for Catholic Charities.

The City Council of Omaha, Nebraska, is elected every four years on a nonpartisan basis. The next election will occur in 2021. Omaha has a strong mayor form of government. Members are elected by district. Currently seven city council districts are represented across the City of Omaha.

The Council of State Governments (CSG) is a nonpartisan, non-profit organization in the United States that serves all three branches of state government. Founded in 1933 by Colorado state Sen. Henry W. Toll, CSG is a region-based forum that fosters the exchange of insights and ideas to help state officials shape public policy.

Jeremiah J. Nordquist is a politician from the state of Nebraska in the Midwestern United States. Nordquist represented an Omaha district in the Nebraska Legislature from 2009 to 2015. He is a member of the Democratic Party.

Robert J. Krist is an American politician who served as the Nebraska State Senator from the 10th district from 2009 to 2019. A member of the Republican Party until 2017, his district includes Bennington and part of Omaha. Krist joined the Democratic Party in 2018; he was its nominee for Governor of Nebraska in the 2018 election.

The Nebraska Legislature is the supreme legislative body of the state of Nebraska. Its members are called "senators", as it was originally the upper house of a bicameral legislature before the Nebraska House of Representatives was abolished in 1934, effective 1937. The legislature is unicameral and officially recognizes no party affiliation, making Nebraska unique among U.S. states. With 49 members, it is also the smallest legislature of any U.S. state. The Legislature meets at the Nebraska State Capitol in Lincoln.

Burke Harr is a politician from the U.S. state of Nebraska. Harr was a member of the Nebraska Legislature, in which he represented the 8th legislative district in Omaha, consisting of the midtown neighborhoods of Dundee and Benson and the neighborhoods that surround Creighton Preparatory School. Harr was barred from reelection in 2018 due to term limits.

Benjamin Eric Sasse is an American politician serving as the junior United States senator for Nebraska since 2015. He is a member of the Republican Party.

Nicole Fox is a politician from the state of Nebraska in the Midwestern United States. She is a member of the Republican Party. In 2015, she was appointed to fill a vacant seat in the Nebraska Legislature, representing a district in downtown and southern Omaha. In 2016, she sought election to the seat and came in third in the nonpartisan primary and thus failed to advance to the general election. 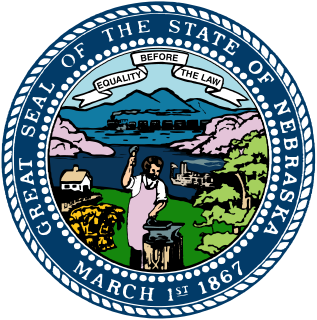 The 2018 Nebraska gubernatorial election took place on November 6, 2018, to elect the Governor of Nebraska, concurrently with the election of Nebraska's Class I U.S. Senate seat, as well as other elections to the United States Senate in other states, elections to the United States House of Representatives, and various Nebraska and local elections. Incumbent Republican Governor Pete Ricketts won re-election to a second term.

Carol Blood is an American politician from the U.S. state of Nebraska. In 2016, she was elected to the unicameral Nebraska Legislature, representing District 3 in Sarpy County. She defeated Republican incumbent Tommy Garrett. Blood is a member of the Democratic Party. The legislature is nonpartisan.

Lynne Walz is a Nebraska Senator for the Unicameral. She currently represents District 15 which includes Fremont, NE and surrounding areas. She is a member of the Democratic Party but the Nebraska Unicameral is a nonpartisan elected body. 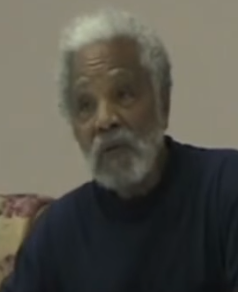 The 2018 Nebraska State Legislature elections took place as part of the biennial United States elections. Nebraska voters elected state senators in the 24 even-numbered seats of the 49 legislative districts in the Nebraska Unicameral. Nebraska is unique among American states in that there is only one chamber in its state legislature, and this chamber is called the Unicameral and the State Legislature interchangeably. State senators serve four-year terms in the Nebraska Unicameral. 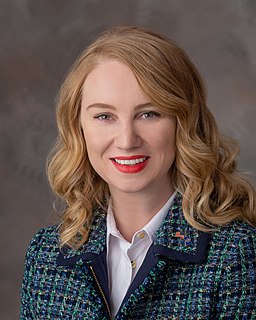 Megan Catherine Hunt is an American entrepreneur and politician from the U.S. state of Nebraska, elected to the Nebraska Legislature in the 2018 Nebraska State Legislature election. Hunt represents the 8th legislative district in Omaha, consisting of the midtown neighborhoods of Dundee, Benson, and Keystone. She replaced term limited Nebraska State Senator Burke Haar. Hunt is a member of the Democratic Party. Hunt has said that Nebraska needs to focus on policies that will help counteract brain-drain.

The 2022 Nebraska gubernatorial election will take place on November 8, 2022, to elect the Governor of Nebraska. Incumbent Republican Governor Pete Ricketts is term-limited and cannot seek re-election to a third term.