Toonz Animation India Pvt. Ltd. is an animation company in India. It is the animation arm of the Singapore-based Toonz Group, which has diverse interests in production and distribution of live-action feature films, digital and gaming content, licensing and merchandising, and media-related education. [1] [2]

Toonz Animation was started in 1999 by G. A. Menon and Bill Dennis, who had worked on Disney's The Little Mermaid , Beauty and the Beast and Aladdin . Toonz Animation is located in Thiruvananthapuram (Trivandrum), the capital city of Kerala. Its office is currently situated in the Technopark; it is expanding to a new 2.5-acre (10,000 m2) campus in the Kinfra Film and Video Park in Trivandrum.

Major projects on which Toonz Animation has worked include The Adventures of Tenali Raman , Return of Hanuman , Freefonix , Wolverine and the X-Men , Dragonlance: Dragons of Autumn Twilight , Kid Krrish , and Gaturro . [3]

Toonz Animation is also the producer of the popular cricket based 2D animated teleseries Howzzattt .

Gaturro(film) a 90-minute 3D-animation feature film, including character design has been done in the Toonz Animation studio at Technopark Campus, Trivandrum, Kerala

Toonz Animation operates and promotes a number of digital channels, including the noted Chotoonz TV, a digital channel for kids cartoon videos with more than 2 million subscribers and 1.75 Billion views. Toonz channels are available on YouTube, Dailymotion, Amazon Prime, Roku and other digital platforms.

Rajiv Chilaka also known as Rajiv Chilakalapudi and Sitarama Rajiv Chilakalapudi is the founder and CEO of Hyderabad-based Green Gold Animations and the creator of a few cartoons including Krishna cartoon series and Chhota Bheem which has now been made into an animated series and films. For his work in presenting cartoons at affordable price, Chilika was conferred with an honorary doctorate of humane letters by the Academy of Art University, San Francisco in 2016. He was the recipient of the 2013 School of Computing and Engineering Alumni Achievement Award at the University of Missouri - Kansas City. 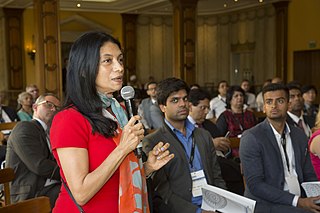 Zarina Screwvala is an Indian entrepreneur and philanthropist. She is currently the Managing Trustee of Swades Foundation, a foundation dedicated towards Rural Empowerment in India.

The Adventures of Tenali Rama is an Indian animated television series that premiered on Cartoon Network on 14 June 2003. It was based on one of the most popular and best-loved characters of Indian folklore. It was produced by Toonz Animation Studios, Trivandrum. Promoted with the tagline "Get Ready for the Rama Effect", the series aired every Saturday and Sunday on Cartoon Network in India.

Howzzattt is a digital 2D animation series, focusing on the adventures of a bunch of cricket-crazy youngsters, who like to call them as 'Gulab Nagar Junglees'. The series was developed by Toonz Animation India, Trivandrum. The 13 episode series first aired on Disney XD India from 13 May 2012 and was later syndicated on Discovery Kids India. It was developed by Renju Ramesh and Rathan Sam George.

Animax was an Indian television channel owned by Sony Pictures Entertainment. It was operated and broadcast from Singapore by Animax Asia and distributed by Sony Pictures Networks India Pvt. Ltd. It aired hindi dub of anime, but then later switched to English dubs with some subbed anime before switching entirely to subbed anime. It was the only channel in India to simulcast anime on the same day as Japan. It targeted 7-14 and 15-25 age demographics over its history.

Discovery Kids is a television channel for kids in India launched 7 August 2012 by Discovery India, a division of Discovery Networks Asia Pacific.The channel is the Indian equivalent to the original American network.

Chotoonz TV is a cartoon channel for kids, on YouTube and other digital platforms. Chotoonz TV predominantly features chase comedy cartoons such as Rat A Tat and Cat& Keet. Other content on the channel include " The Magical Toothfairies", " Chai Chai" and "The Adventures of Tenali Raman". The channel is owned by Toonz Animation. The channel was incorporated on October 30, 2013. As in March 2018, the channel has 2.2 million subscribers and 1.75 Billion views.

Kid Krrish is an Indian animated television film produced by Toonz Animation, Film Kraft Productions and Turner International India. It was released on 2 October 2013 and is part of Kid Krrish film series, which itself is part of Krrish franchise, with its three sequels: Kid Krrish: Mission Bhutan, Kid Krrish: Mystery in Mongolia and Kid Krrish: Shakalaka Africa.