Topaz is a fictional sorceress appearing in American comic books published by Marvel Comics. The fictional character was created by writer Marv Wolfman and artist Mike Ploog and first appeared in the comic book Werewolf By Night #13 (1974). [1]

In 1998, the character was present in the comic book Spider-Man Unlimited vol.1 #20. The following year, the sorceress is a supporting character of the mini-series Dr. Strange: Flight of Bones. Five years later in 2004, the writer Brian Patrick Walsh chose three witches Jennifer Kale, Satana Hellstrom, and Topaz as the three main characters of the mini-series Witches . [3]

The character's origins and real name are unknown, even to herself. As an adolescent child, Topaz was found by the sorcerer Taboo, who was living in an Indian prison camp at the time. Also living in the prison camp, the locals feared the girl and called her a witch, as she was able to magically create flowers, move things with her mind and cause things to disappear. Wishing to use her abilities to his own ends, Taboo adopted her and named her Topaz. He used her as a familiar and taught her several magical spells. Years later, Taboo forced Topaz to use her powerful empathic powers to control the werewolf known as Jack Russell for a time.[ volume & issue needed ] Taboo was searching for the magical Darkhold tome, of which he believed Jack was in possession.[ volume & issue needed ] Cast out by Taboo after refusing to kill Russell, Topaz chose to help Jack learn to control his werewolf powers, and also became his lover. She assisted Russell many times, including helping him to learn about his family history and even helping him take on Dracula. [C 1] However, some time later, Topaz was exploited by Dr. Glitternight, who stole a portion of her soul.[ volume & issue needed ] Jack's grandmother, Maria Russoff, also once used Topaz' power to raise an army of zombies as part of a mad revenge scheme. Topaz was eventually restored to sanity however, and Maria sacrificed her life once she saw that her actions had placed her grandson in danger. [C 2] Topaz later used her powers to save Jack's sister, Lissa, from the werewolf curse (which was passed from generation to generation within their family). [C 3] After discovering what Glitternight had done to her, Topaz fought and defeated the villain, regaining her soul in the process. [C 4]

Topaz also temporarily destroyed the villain known as Mephisto, but the demon-lord's minions managed to trap her in another dimension with a spell that would remove another portion of her soul and rob her of her empathic powers if she ever left that realm. Later, Mephisto was revealed to be alive, and after he was once again destroyed by Franklin Richards of the Fantastic Four, Topaz was freed from her imprisonment. [C 5] Her soul was eventually restored by Doctor Strange and the alien sorcerer known as Urthona. [C 6]

As Topaz reached the age of 21, her powers reached their full potential, and she used them to heal the wounds of Doctor Strange's loyal servant, Wong. She left Strange's side when he briefly turned to the black magics, but later returned to aid him in his fight against Dormammu. [C 7]

Later, Topaz led the quiet life for a while, running a bar called The Voodoo Lounge. [C 8] However, once Dormammu got word of her whereabouts, he sought revenge and had one of his agents enslave the young sorceress. Once again, Doctor Strange came to her rescue. Topaz later helped Doctor Strange in yet another battle, joining forces with Jennifer Kale and Satana against the Hellphyr force and fighting yet more zombies and demons. After winning this battle, Topaz decided to leave Strange's side yet again, and founded the group known as the Witches in order to protect the world from mystical threats and prevent would-be thieves from stealing the Kale family's Book of Shadows. [C 9]

Topaz is a powerful mystic with exceptional empathic, telepathic, and telekinetic/psychokinetic abilities. She can magnify or diminish emotions, infuse life energy, and heal injures. She can serve as a familiar to other sorcerers, focusing and magnifying their abilities. She can absorb pain, suffering, hatred, and fear from other humans into herself.

She has taken two separate forms, one blonde European and one brunette Indian. 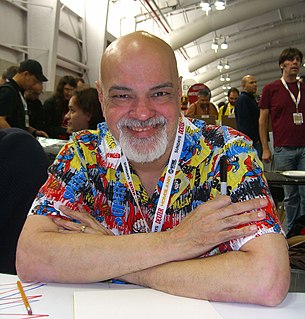 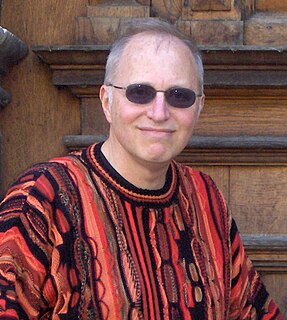 Marvin Arthur Wolfman is an American comic book and novelization writer. He worked on Marvel Comics's The Tomb of Dracula, for which he and artist Gene Colan created the vampire-slayer Blade, and DC Comics's The New Teen Titans and the Crisis on Infinite Earths limited series with George Pérez, as well as the God of War comics. Among the many characters Wolfman created or co-created are Cyborg, Raven, Starfire, Deathstroke, Tim Drake, Rose Wilson, Nova, Black Cat, Bullseye and the Omega Men. 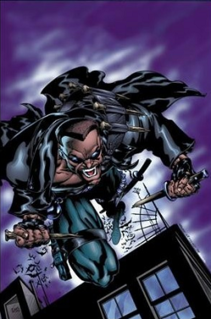 Blade is a fictional character appearing in American comic books published by Marvel Comics. Created by writer Marv Wolfman and penciller Gene Colan, his first appearance was in the comic book The Tomb of Dracula #10 as a supporting character, but later went on to star in his own storylines. Blade is usually depicted as a human-vampire hybrid, who aims to rid the world of evil vampires, and trained himself to become the ultimate monster hunter.

The Tomb of Dracula is an American horror comic book series published by Marvel Comics from April 1972 to August 1979. The 70-issue series featured a group of vampire hunters who fought Count Dracula and other supernatural menaces. On rare occasions, Dracula would work with these vampire hunters against a common threat or battle other supernatural threats on his own, but more often than not, he was the antagonist rather than protagonist. In addition to his supernatural battles in this series, Marvel's Dracula often served as a supervillain to other characters in the Marvel Universe, battling the likes of Blade the Vampire Slayer, Spider-Man, the Werewolf, the X-Men, Howard the Duck, and the licensed Robert E. Howard character Solomon Kane.

Douglas Moench is an American comic book writer notable for his Batman work and as the creator of Moon Knight, Deathlok, Black Mask, Electric Warrior and Six From Sirius. He is also known for his critically acclaimed eight year run on Master of Kung Fu. 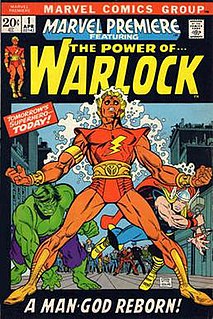 Marvel Premiere is an American comic book anthology series that was published by Marvel Comics. In concept it was a tryout book, intended to determine if a character or concept could attract enough readers to justify launching their own series, though in its later years it was also often used as a dumping ground for stories which could not be published elsewhere. It ran for 61 issues from April 1972 to August 1981. Contrary to the title, the majority of the characters and concepts featured in Marvel Premiere had previously appeared in other comics. 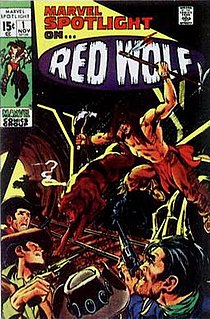 Marvel Spotlight is a comic book anthology series published by Marvel Comics as a try-out book. It stood out from Marvel's other try-out books in that most of the featured characters made their first appearance in the series. The series originally ran for 33 issues from November 1971 to April 1977. A second volume ran for 11 issues from July 1979 to March 1981.

Eugene Jules Colan was an American comic book artist best known for his work for Marvel Comics, where his signature titles include the superhero series Daredevil, the cult-hit satiric series Howard the Duck, and The Tomb of Dracula, considered one of comics' classic horror series. He co-created the Falcon, the first African-American superhero in mainstream comics, portrayed by Anthony Mackie in the Marvel Cinematic Universe (MCU); Carol Danvers, who would become Ms. Marvel and Captain Marvel, and is portrayed by Brie Larson in the MCU; and the non-costumed, supernatural vampire hunter Blade, who went on to appear in a series of films starring Wesley Snipes. 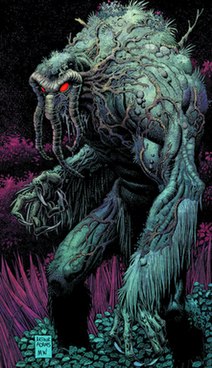 The Man-Thing is a fictional character appearing in American comic books published by Marvel Comics. Created by writers Stan Lee, Roy Thomas, and Gerry Conway and artist Gray Morrow, the character first appeared in Savage Tales #1, and went on to be featured in various titles and in his own series, including Adventure into Fear, which introduced the character Howard the Duck.

Clea is a fictional character, a sorceress appearing in American comic books published by Marvel Comics. She is a sorceress and the disciple and lover of Doctor Strange. Created by co-plotters Stan Lee and Steve Ditko, Clea first appeared in the Doctor Strange feature in Strange Tales #126.

Don Perlin is an American comic book artist, writer, and editor. He is best known for Marvel Comics' Werewolf by Night, Moon Knight, The Defenders, and Ghost Rider. In the 1990s, he worked for Valiant Comics, both as artist and editor.

Brother Voodoo is a fictional character appearing in American comic books published by Marvel Comics. He first appeared in Strange Tales #169. The character was created by publisher Stan Lee, Roy Thomas, Len Wein, and artist John Romita Sr. Since replacing Doctor Strange as Sorcerer Supreme in The New Avengers #53, the character is referred to as Doctor Voodoo.

Witches is a supernatural comic book limited series that was published by Marvel Comics in 2004. Plotted by Bronwyn Carlton, with scripts by Brian Walsh, it featured art by Mike Deodato and Will Conrad.

Weirdworld was a fantasy series created by Doug Moench and Mike Ploog for American company Marvel Comics, set in a dimension of magic. A comic book series titled Weirdworld debuted in 2015 as a tie-in to the Secret Wars storyline, followed by a six-issue series as a part of the All-New, All-Different Marvel branding.

Jennifer Kale is a fictional character, a sorceress appearing in American comic books published by Marvel Comics. Created by Steve Gerber and Rich Buckler in 1972, she was originally a supporting character in Man-Thing comic books. Since her creation she has appeared in a number of other comic books of the Marvel Comics shared continuity.

Dakimh the Enchanter is a fictional character appearing in American comic books published by Marvel Comics.

John Costanza is an artist and letterer who has worked in the American comic book industry. He has worked for both DC Comics and Marvel Comics. He was the letterer during Alan Moore's acclaimed run on Swamp Thing. The bulk of Costanza's art assignments have been for funny animal comics and children-oriented material.