Last updated December 10, 2020
The collecting of postage stamps relating to a particular subject or concept

Topical or thematic stamp collecting is the collecting of postage stamps relating to a particular subject or concept. [1] Topics can be almost anything, [2] from stamps on stamps, [3] birds, trains and poets on stamps, to famous physicians and scientists, along with historical people and events on stamps, which is often a standard theme for many stamp issuing countries.

The earliest stamps simply depicted busts of reigning monarchs, important figures, or coats of arms, but as time went on stamps started to have a wider range of designs. Bears appeared on provisional stamps of St. Louis in 1845, while the beaver was featured on the earliest stamps of Canada. More than 150 years later, the variety of designs on stamps is enormous, giving topical collectors plenty of scope to find stamps for their chosen theme. [4] In fact, so many stamps have been issued that some popular themes, such as ships or birds, have become nearly impossible to complete, and topical collectors may specialize further, such as by looking for only square-rigged sailing ships, or only flightless birds.

Since most types of stamp designs are commonly available and inexpensive, acquiring them is mostly a matter of poring over the stamp catalog looking for relevant types, and learning enough about the topic to recognize subtle connections. The American Topical Association and others have published handbooks and lists of larger topics. [5] [6]

Online marketplaces and trade platforms are the most common way of collecting new stamps.[ citation needed ]

Topical collecting is a recognized category for competitive exhibitions and has its own Commission with the FIP (Fédération Internationale de Philatélie). [7]

Stamps with an anarchist theme were issued during the Spanish Civil War by the Confederación Nacional del Trabajo. [8] [9] [10]

Philately is the study of postage stamps and postal history. It also refers to the collection, appreciation and research activities on stamps and other philatelic products. Philately involves more than just stamp collecting or the study of postage; it is possible to be a philatelist without owning any stamps. For instance, the stamps being studied may be very rare or reside only in museums. 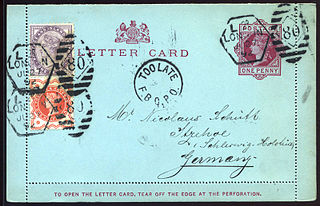 A piece of postal stationery is a stationery item, such as a stamped envelope, letter sheet, postal card, lettercard, aerogram or wrapper, with an imprinted stamp or inscription indicating that a specific rate of postage or related service has been prepaid. It does not, however, include any postcard without a pre-printed stamp.

An airmail stamp is a postage stamp intended to pay either an airmail fee that is charged in addition to the surface rate, or the full airmail rate, for an item of mail to be transported by air.

In philately, a cinderella stamp is "virtually anything resembling a postage stamp, but not issued for postal purposes by a government postal administration". The term excludes imprinted stamps on postal stationery. 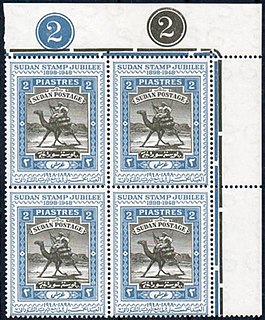 A plate block is a block of stamps from the edge of the sheet which shows the plate or cylinder from which the stamps were printed.

The American Topical Association (ATA) is a US-based philatelic society and the largest organization devoted to topical stamp collecting. It was established in 1949 in Milwaukee, Wisconsin by Jerome (Jerry) Husak. It currently serves members in over 60 countries. ATA publishes Topical Time, its bimonthly journal. It also publishes numerous handbooks and maintains many checklists listing hundreds of stamps by topic. The organization runs the National Topical Stamp Show as well as supporting 50+ study units on various topics and 40+ local chapters.

The Europa postage stamp is an annual joint issue of stamps with a common design or theme by postal administrations of member countries of the European Communities (1956-1959), the European Conference of Postal and Telecommunications Administrations (CEPT) from 1960 to 1992, and the PostEurop Association since 1993. Europe is the central theme.

Astrophilately is a branch of philately which deals with the collection of stamps and postmarked envelopes related to spaceflight. It is the intersection of space and postal history. Covers cancelled on the date and at a post office near the controlling agency are used in postal exhibits to share the development and conquest of the cosmos.

The Fédération Internationale de Philatélie (FIP) was founded on 18 June 1926, and is the world federation for philately based in Zürich, Switzerland. 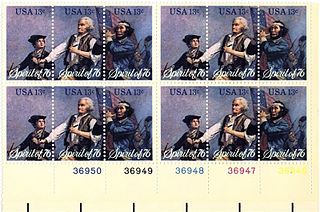 A triptych is a philatelic term which was borrowed from the art world and having the same meaning: a set of three panels hinged together. It is used to describe three se-tenant postage stamps of related design that make up a complete single design.

Maximaphily is a branch of philately involving the study and creation of maximum cards. It is one of eleven classifications of philately recognised by the Fédération Internationale de Philatélie (FIP) and therefore has its own FIP Commission.

Mary Ann Aspinwall Owens, of New York City, was an advocate of thematic collecting of postage stamps, such as collecting stamps showing birds, butterflies, ships, famous art, and so on. She was successful in her effort to officially help introduce thematic collecting into national and international philatelic exhibitions.

Peter P. McCann, of University Park, Florida, is a philatelist who has supported the hobby of philately on a national scale. For his varied services to the American Philatelic Society (APS) over several decades, he was awarded in 2008 the Luff Award for outstanding service to the society.

The London 1980 International Stamp Exhibition was an international stamp exhibition held under FIP patronage. It was held at Earls Court from the 6–14 May 1980.

Se-tenant stamps or labels are printed from the same plate and sheet and adjoin one another, unsevered in a strip or block. They differ from each other by design, color, denomination or overprint. They may have a continuous design. The word "se-tenant" translates from French as meaning "joined together" or "holding together". 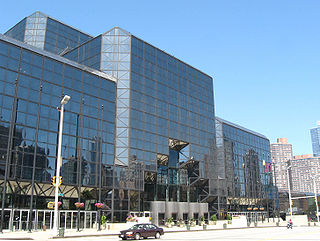 World Stamp Show-NY 2016 was the United States' once-a-decade international celebration of stamp collecting. It took place at the Jacob K. Javits Convention Center in New York from May 28 to June 4, 2016. This was the first international stamp show to be held in New York since FIPEX in 1956.