Tora Aasland (born 6 November 1942, in Skien) is a Norwegian politician for the Socialist Left Party. She served as the Minister of Research and Higher Education from 18 October 2007 to 23 March 2012. She was a member of the Norwegian Parliament, representing Akershus, from 1985 to 1993. From 1991 to 2013, she served as the County Governor of Rogaland.

Aasland was a deputy member of the executive committee of Nesodden municipality council during the terms 1975–1979 and 1979–1983.

Aasland has a cand.sociol. degree in sociology and was a researcher at the Norwegian Institute for Social Research from 1976 to 1982, and its acting director from 1980 to 1981. She has cited Vilhelm Aubert as her largest influence. [1]

Nesodden is a municipality in Akershus in Viken county, Norway. It is part of the traditional region of Follo. The administrative centre of the municipality is Nesoddtangen. The parish of Næsodden was established as a municipality on 1 January 1838. The new municipality of Oppegård was separated from Nesodden on 1 July 1915. 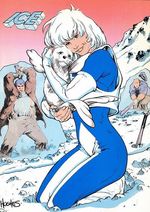 Ice is a fictional character, a comic book superheroine in publications from DC Comics. 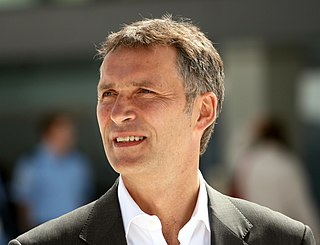 Tora Berger is a retired Norwegian biathlete and Olympic champion.

Terje Lien Aasland is a Norwegian politician for the Labour Party.

Aasland is a Norwegian-language surname. Notable people with the surname include:

Gunnar Aasland is a Norwegian judge.

The Nordic Gender Institute (NIKK), previously Nordic Institute for Women's Studies and Gender Research, was a transnational resource and information centre for gender research and gender equality in the Nordic countries. It was established in 1995 by the Nordic Council of Ministers and closed down in 2011.

Aaslaug Aasland was a Norwegian politician for the Labour Party. She served as Norwegian Minister of Social Affairs from 1948 to 1953.

Jens Olaf Gjerløw was a Norwegian newspaper editor. He was editor for the newspaper Morgenbladet from 1920 until his death in 1949, except for a period in German prisons during World War II.

Ann-Mari Aasland was a Norwegian politician for the Conservative Party.

The Nordic Women's University is a Nordic research organisation, hosted by Nord University and incorporated as a foundation in Norway. It is involved in "research, teaching and information on and for women, grounded in feminist values and feminist pedagogics and with particular emphasis on Nordic and international perspectives." Established in 2011 on the initiative of former MP Berit Ås and others, the NWU is entirely funded by the Ministry of Education and Research and the Ministry of Children, Equality and Social Inclusion and hosted by one of the 24 Norwegian state university colleges. It received 1 million NOK in initial funding from the two ministries and as of 2012 further 2 million NOK from the Ministry of Education and Research, and receives funding over the State budget of Norway. Its establishment was supported by Tora Aasland, the Minister of Research and Higher Education, and law professor Henning Jakhelln and lawyer and Labour politician Ingjald Ørbeck Sørheim were also involved in the effort.

Ivar Asheim is a Norwegian theologian known for his early research into Christian education and later publications investigating the moral theology of Martin Luther, including its relation to Aristotelian virtue ethics.

Tora Karen Elisabeth Augestad is a Norwegian musician (vocals), musical conductor and actor, and the daughter of Program 81/82 vocalist Kate Augestad. She focuses on jazz, musical theater, contemporary music, and cabaret. Her stage debut was the lead role in "Annie" in 1994, and won the Norwegian talent competition in 1993 at TV 2.

Lasse Aasland was a Norwegian politician for the Labour Party.