Triomphe d'Alsace is a black grape variety of Franco-German origin, commonly grown in the United Kingdom.

Triomphe d'Alsace was produced by Eugène Kuhlmann from about 1911 at the Institut Viticole Oberlin at Colmar in Alsace, then a part of Germany. First he crossed the American River Bank Grape, Vitis riparia with another American species, the Bush Grape, Vitis rupestris . The resultant hybrid was then crossed with Goldriesling, a variety of the wine grape, Vitis vinifera , developed about twenty years earlier by Christian Oberlin. From a similar set of crosses came range of sibling varieties like Lucie Kuhlmann, Léon Millot, Marechal Foch, Maréchal Joffre, Pinard, Etoile I and Etoile II.

The variety was not brought to market until 1921, by which time Alsace had been restored to France following World War I.

The Triomphe d'Alsace vine is fairly vigorous and very robust, growing rapidly even in cool climates. The leaves are not deeply indented and can grow to a very large size, producing a dense canopy which has to be thinned to promote ripening and to suppress mildew. They become very tough and leathery with age, although they can be stuffed and eaten when young. The grapes are generally small and grow in a profusion of small bunches. They ripen early, and often suddenly, even in cool and damp summers, although harvest may have to be postponed as late as October. Good crops are possible at least in the Midlands and North of England, and still further north in favourable situations. However, the variety is not so robust against disease and can suffer from mildew if the autumn is exceptionally wet.

In England, the vines need to be pruned hard in the winter to keep them under control, as they will grow to great size if not cut back. It is important to prune while growth is completely absent, as the stems bleed sap profusely once the growing season begins. [1]

Wine made from the Triomphe d'Alsace can vary from a very deep, almost black, purple to a rosé, depending on the method of extraction. Although the sugar content is quite high, under English conditions it will usually require some chaptalization to bring the level of alcohol into the 10-12% range. The red wine is considered to have a slight flavour of raspberry.

Triomphe d'Alsace has never been widely grown in its countries of origin but did find a niche in the wine of colder countries. It is found in Dutch wine and in Wine from the United Kingdom. It was widely planted in English vineyards until the 1990s but has since become less fashionable. It remains a favourite among amateur winemakers and gardeners because of its ease of cultivation and its value as a shade plant.

Triomphe d'Alsace is also known as

Pinot noir is a red wine grape variety of the species Vitis vinifera. The name may also refer to wines created predominantly from Pinot noir grapes. The name is derived from the French words for pine and black. The word pine alludes to the grape variety having tightly clustered, pine cone-shaped bunches of fruit.

Aurore is a white complex hybrid grape variety produced by Albert Seibel and used for wine production mostly in the United States and Canada. Over a long lifetime Seibel produced many complex hybrid crosses of Vitis vinifera to American grapes. It is a cross of Seibel 788 and Seibel 29. 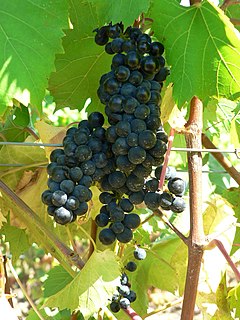 Maréchal Foch is an inter-specific hybrid French red wine grape variety. It was developed at the Oberlin Institute in Colmar-Alsace, at the beginning of the 20th century, by Eugène Kuhlmann, then known as Kuhlmann 188-2. The variety arrived in the U.S. in 1946, where it was subsequently renamed Marechal Foch in honor of Marshall Ferdinand Foch, Supreme Allied Commander during the First World War. Some believe it to be a cross of Goldriesling with a Vitis riparia - Vitis rupestris cross. Others contend that its pedigree is uncertain and may contain the grape variety Oberlin 595. It ripens early, and it is cold-hardy and resistant to fungal diseases. The berry size is small, which makes it prone to bird injury. The quality of wine produced by Marechal Foch vines is highly dependent upon vine age, and the flavor profile associated with many new-world hybrid varietals is much reduced in examples made with fruit picked from older vines. 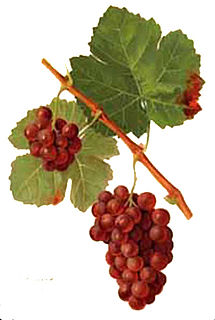 Gewürztraminer is an aromatic wine grape variety, used in white wines, and performs best in cooler climates. In English, it is sometimes referred to colloquially as Gewürz, and in English and French it is written Gewurztraminer. Gewürztraminer is a variety with a pink to red skin colour, which makes it a "white wine grape" as opposed to the blue to black-skinned varieties commonly referred to as "red wine grapes". The variety has high natural sugar and the wines are white and usually off-dry, with a flamboyant bouquet of lychees. Indeed, Gewürztraminer and lychees share the same aroma compounds. Dry Gewürztraminers may also have aromas of roses, passion fruit and floral notes. It is not uncommon to notice some spritz. 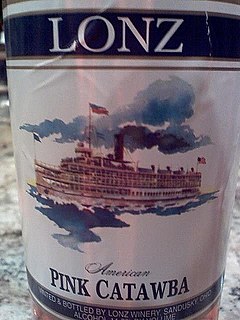 Catawba is a red American grape variety used for wine as well as juice, jams and jellies. The grape can have a pronounced musky or "foxy" flavor. Grown predominantly on the East Coast of the United States, this purplish-red grape is a likely cross of the Native American Vitis labrusca and the Vitis vinifera cultivar Semillon. Its exact origins are unclear but it seems to have originated somewhere on the East coast from the Carolinas to Maryland.

Vidal blanc is a white hybrid grape variety produced from the Vitis vinifera variety Ugni blanc and another hybrid variety, Rayon d'Or. It is a very winter-hardy variety that manages to produce high sugar levels in cold climates with moderate to high acidity. 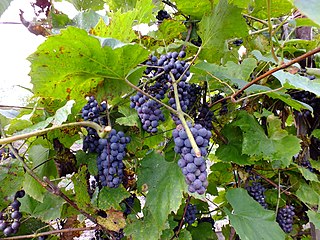 Vitis amurensis, the Amur grape, is a species of grape native to the Asian continent. Its name comes from the Amur Valley in Russia and China. 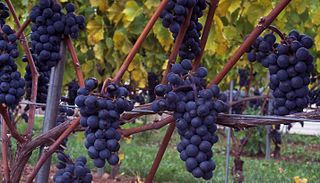 Hybrid grapes are grape varieties that are the product of a crossing of two or more Vitis species. This is in contrast to crossings between grape varieties of the same species, typically Vitis vinifera, the European grapevine. Hybrid grapes are also referred to as inter-specific crossings or "Modern Varieties." Due to their often excellent tolerance to powdery mildew, other fungal diseases, nematodes, and phylloxera, hybrid varieties have, to some extent, become a renewed focus for European breeding programs. The recently developed varieties, Rondo, and Regent are examples of newer hybrid grape varieties for European viticulturalists. Several North American breeding programs, such as those at Cornell and the University of Minnesota, focus exclusively on hybrid grapes, with active and successful programs, having created hundreds if not thousands of new varieties. 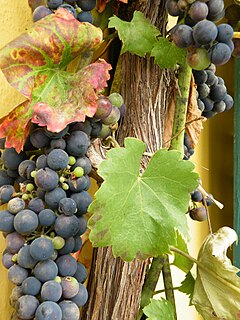 Regent is a dark-skinned inter-specific hybrid grape variety, used for making wine. It has both European and American vine species in its pedigree and a broad resistance against the most significant fungal diseases which affect grapes, such as downy mildew.

Muscat Blanc à Petits Grains is a white wine grape of Greek origin that is a member of the Muscat family of Vitis vinifera. Its name comes from its characteristic small berry size and tight clusters. It is known under a variety of local names such as Moscato bianco, Muscat blanc, Muscat Canelli, Muscat de Frontignan, Muscat de Lunel, Muscat d'Alsace, Muskateller, Moscatel de Grano Menudo, Moscatel rosé and Sárgamuskotály. 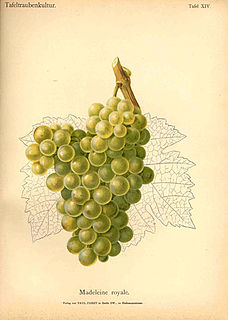 Madeleine Royale is a variety of white grape. It is mostly grown for table grapes or ornamental purposes, but is notable as a parent of Müller-Thurgau and Madeleine Angevine. It ripens extremely early, in some cases by the 22 July, the feast day of Mary Magdalene - hence the name.

Knipperlé is a traditional French variety of white wine grape from Alsace. It's not listed for use in AOC wine, but is a minor component of blends for local drinking, in some ways an Alsatian equivalent of its sibling Aligoté in Burgundy.

Goldriesling is a grape variety of the species Vitis vinifera used for white wine. It was created in 1893 by Christian Oberlin in Colmar, Alsace by crossing Riesling with another grape variety, which is sometimes given as Courtillier Musqué Précoce, but not identified conclusively. 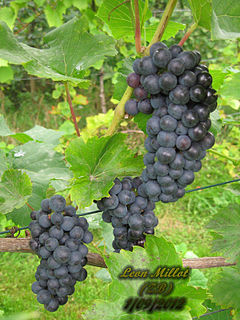 Léon Millot is a red variety of hybrid grape used for wine. It was created in 1911 in the Oberlin Institute in Colmar, Alsace, by the French viticulturist Eugène Kuhlmann (1858–1932) by crossing the hybrid grape Millardet et Grasset 101-14 O.P. with Goldriesling, which is Vitis vinifera. The variety was named after the winemaker and tree nursery owner Léon Millot.

Incrocio Manzoni or Manzoni grapes is a family of grape varieties named after Professor Luigi Manzoni (1888-1968) of Italy's oldest school of oenology located in Conegliano, in the Veneto region. Manzoni created the new grape varieties by selecting, crossing and grafting vines from various vineyards during the 1920s and 1930s. The family includes both white and red grape varieties. Although most Manzonis are grown in northeastern Italy, they are mainly grown in the Piave area of Province of Treviso and are only now starting to be sold commercially in Europe and the United States.

Ravat blanc is a white hybrid grape variety that is a crossing of Chardonnay and a Seibel grape. While the Vitis International Variety Catalogue (VIVC) maintained by the Geilweilerhof Institute for Grape Breeding list Seibel 5474 as the second parent, Master of Wine Jancis Robinson notes that other authors list Seibel 8724 as the parent. The grape is often confused with the white hybrid grape Vignoles that is often called just Ravat.

Manto negro is a red Spanish wine grape variety grown on the Balearic islands. It is used in wines produced under the Binissalem-Mallorca and Plà i Llevant (DO) Denominación de Origen (DO)s, as well as the Illes Balears appellations. Today, Manto negro is almost exclusively found on the island of Majorca with 320 hectares, making it the most widely planted grape variety on the island. It represents over 20% of the total vineyard land in production. Although planted throughout the island, the vine seems to be more successful in the rocky soils of the western Binissalem region.