Tritrichomonas blagburni is a genus of parasite that infects the digestive system of cats.

Tritrichomonas blagburni is a single-celled eukaryote that moves with whip-like flagella located on the exterior of its cell membrane. It is transmitted between cattle through sexual activity and infects their reproductive tracts. In cats, it infects the digestive tract, causing chronic diarrhea, tenesmus, flatulence, and fecal incontinence. [1] It is only the second species described in the reproductive tract of cattle and the intestine of cats. [2]

Trichomoniasis, found in cattle and cats, is caused by both T. fetus and T. blagburni. In cats, it infects the digestive tract, causing chronic disease and large bowel diarrhea. Infected cattle show signs of pyometra and mid- to late-term abortions. [4]

Complete eradication of the parasite continues to be sought. However, antiprotozoal agents, such as ronidazole or metronidazole, are known to dramatically reduce symptoms in cats. Research has found that cats left untreated will have 88% of their symptoms cease after two years. [5] 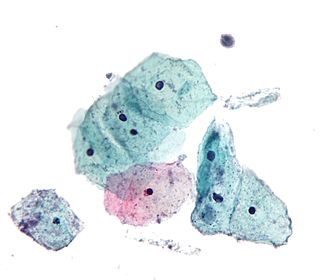 Trichomoniasis (trich) is an infectious disease caused by the parasite Trichomonas vaginalis. About 70% of women and men do not have symptoms when infected. When symptoms do occur they typically begin 5 to 28 days after exposure. Symptoms can include itching in the genital area, a bad smelling thin vaginal discharge, burning with urination, and pain with sex. Having trichomoniasis increases the risk of getting HIV/AIDS. It may also cause complications during pregnancy.

Giardiasis, popularly known as beaver fever, is a parasitic disease caused by Giardia duodenalis. About 10% of those infected have no symptoms. When symptoms occur they may include diarrhea, abdominal pain, and weight loss. Vomiting, blood in the stool, and fever are less common. Symptoms usually begin 1 to 3 weeks after exposure and without treatment may last up to six weeks.

Trichomonas vaginalis is an anaerobic, flagellated protozoan parasite and the causative agent of trichomoniasis. It is the most common pathogenic protozoan infection of humans in industrialized countries. Infection rates in men and women are similar but women are usually symptomatic, while infections in men are usually asymptomatic. Transmission usually occurs via direct, skin-to-skin contact with an infected individual, most often through vaginal intercourse. The WHO has estimated that 160 million cases of infection are acquired annually worldwide. The estimates for North America alone are between 5 and 8 million new infections each year, with an estimated rate of asymptomatic cases as high as 50%. Usually treatment consists of metronidazole and tinidazole.

Feline leukemia virus (FeLV) is a retrovirus that infects cats. FeLV can be transmitted from infected cats when the transfer of saliva or nasal secretions is involved. If not defeated by the animal's immune system, the virus weakens the cat's immune system which can lead to diseases which can be lethal. Because FeLV is cat-to-cat contagious, FeLV+ cats should only live with other FeLV+ cats. 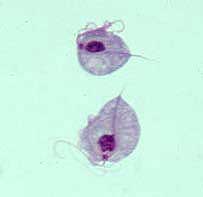 Trichomonas is a genus of anaerobic excavate parasites of vertebrates. It was first discovered by Alfred François Donné in 1836 when he found these parasites in the pus of a patient suffering from vaginitis, an inflammation of the vagina. Donné named the genus from its morphological characteristics. The prefix tricho- originates from the Ancient Greek word θρίξ (thrix) meaning hair, describing Trichomonas’s flagella. The suffix -monas, describes its similarity to unicellular organisms from the genus Monas.

Paratuberculosis is a contagious, chronic and sometimes fatal infection that primarily affects the small intestine of ruminants. It is caused by the bacterium Mycobacterium avium subspecies paratuberculosis. Infections normally affect ruminants, but have also been seen in a variety of nonruminant species, including rabbits, foxes, and birds. Horses, dogs, and nonhuman primates have been infected experimentally. Paratuberculosis is found worldwide, with some states in Australia being the only areas proven to be free of the disease. At least in Canada, the signs of BJD usually start when cattle are four to seven years of age, and then usually only are diagnosed in one animal at a time. Cattle "with signs of Johne’s disease shed billions of bacteria through their manure and serve as a major source of infection for future calves."

Dirofilaria immitis, also known as heartworm or dog heartworm, is a parasitic roundworm that is a type of filarial worm, a small thread-like worm, that causes dirofilariasis. It is spread from host to host through the bites of mosquitoes. There are four genera of mosquitoes that transmit dirofilariasis, Aedes, Culex, Anopheles, and Mansonia. The definitive host is the dog, but it can also infect cats, wolves, coyotes, jackals, foxes, ferrets, red deers, pudús, bears, seals, sea lions and, under rare circumstances, humans.

Coccidiosis is a parasitic disease of the intestinal tract of animals caused by coccidian protozoa. The disease spreads from one animal to another by contact with infected feces or ingestion of infected tissue. Diarrhea, which may become bloody in severe cases, is the primary symptom. Most animals infected with coccidia are asymptomatic, but young or immunocompromised animals may suffer severe symptoms and death.

Campylobacter fetus is a rod-shaped, gram-negative species of bacteria within the genus Campylobacter of phylum Proteobacteria. Identification of C. fetus species in infected animals or people is routinely performed by culture on blood agar or cefoperazone deoxycholate agar. Subspecies of C. fetus can cause reproductive disease in ruminants and gastrointestinal disease in humans. Transmission of C. fetus subspecies venerealis occurs mainly through venereal contact while transmission of C. fetus subspecies fetus occurs mainly through ingestion of bacteria in a contaminated environment. Infertility in cattle and abortion in sheep are common outcomes of infection associated with C. fetussubspecies venerealis and C. fetus subspecies fetus, respectively. Disease in humans occurs through zoonotic transmission of C. fetus mainly through ingestion of contaminated food or water sources. As vaccines are typically not efficient, infected bulls are often culled. Human infections may be treated with erythromycin as antimicrobial resistance has been emerging for the fluoroquinolones. 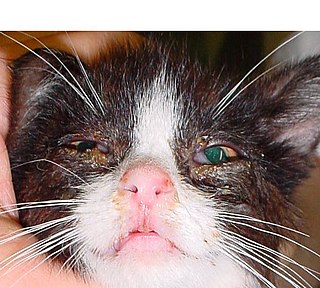 Dientamoebiasis is a medical condition caused by infection with Dientamoeba fragilis, a single-cell parasite that infects the lower gastrointestinal tract of humans. It is an important cause of traveler's diarrhea, chronic abdominal pain, chronic fatigue, and failure to thrive in children. 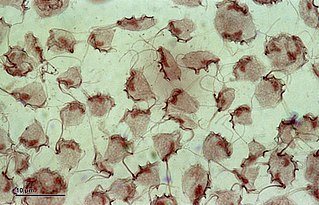 Tritrichomonas foetus is a species of single-celled flagellated parasites that is known to be a pathogen of the bovine reproductive tract as well as the intestinal tract of cats. In cattle, the organism is transmitted to the female vagina and uterus from the foreskin of the bull where the parasite is known to reside. It causes infertility, and, at times, has caused spontaneous abortions in the first trimester. In the last ten years, there have been reports of Tritrichomonas foetus in the feces of young cats that have diarrhea and live in households with multiple cats. Tritrichomonas foetus looks similarly to Giardia and is often misdiagnosis for it when viewed under a microscope.

Veterinary virology is the study of viruses in non-human animals. It is an important branch of veterinary medicine. 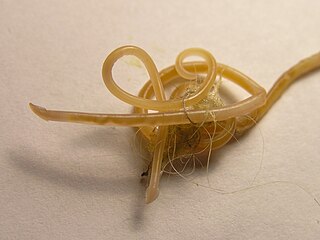 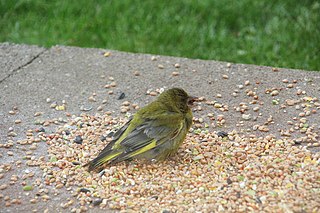 Trichomonas gallinae is a cosmopolitan parasite of birds including finches, pigeons, doves, turkeys, chickens, parrots, raptors. The condition in birds of prey is called frounce. It is believed to be an ancient pathogen causing frounce-like symptoms in theropod dinosaurs. The same condition in pigeons is commonly called canker.

Dientamoeba fragilis is a species of single-celled excavates found in the gastrointestinal tract of some humans, pigs and gorillas. It causes gastrointestinal upset in some people, but not in others. It is an important cause of travellers diarrhoea, chronic diarrhoea, fatigue and, in children, failure to thrive. Despite this, its role as a "commensal, pathobiont, or pathogen" is still debated. D. fragilis is one of the smaller parasites that are able to live in the human intestine. Dientamoeba fragilis cells are able to survive and move in fresh feces but are sensitive to aerobic environments. They dissociate when in contact or placed in saline, tap water or distilled water.

Serum-derived bovine immunoglobulin/protein isolate (SBI) is a medical food product derived from bovine serum obtained from adult cows in the United States. It is sold under the name EnteraGam. 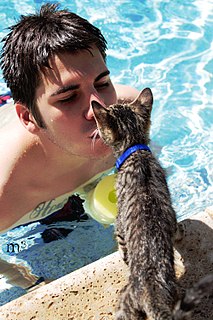 A feline zoonosis is a viral, bacterial, fungal, protozoan, nematode or arthropod infection that can be transmitted to humans from the domesticated cat, Felis catus. Some of these are diseases are reemerging and newly emerging infections or infestations caused by zoonotic pathogens transmitted by cats. In some instances, the cat can display symptoms of infection and sometimes the cat remains asymptomatic. There can be serious illnesses and clinical manifestations in people who become infected. This is dependent on the immune status and age of the person. Those who live in close association with cats are more prone to these infections. But those that do not keep cats as pets are also able to acquire these infections because of the transmission can be from cat feces and the parasites that leave their bodies.

Eimeria zuernii is a species of the parasite Eimeria that causes diarrheic disease known as eimeriosis in cattle, and mainly affects younger animals. The disease is also commonly referred to as coccidiosis. The parasite can be found in cattle around the globe.