Trivia Crack (original Spanish language name: Preguntados) is a trivia-based entertainment franchise and one of the most successful brands in the Etermax gaming division. Initially introduced as a mobile game in 2013, it includes different active games, such as: Trivia Crack, Trivia Crack 2, Trivia Cars, Trivia Crack Adventure, Trivia Crack Kingdoms, andTriviatopia Run, available on Android (operating system) and iOS. Trivia Crack has more than 600 million downloads worldwide and more than 150 million active users annually, including those who are entertained and connect with others through social networks, such as Facebook or with the free Instagram filter Challenge Trivia Crack, with the action of Google Assistant, the skill of Alexa of Amazon and the Apple Watch version. Trivia Crack is available in more than 180 countries, ranking # 1 in trivia games in 125 of them. Board games, consumer products and experiences, as well as the animated series Triviatopia, inspired by its characters, complete the experience.

The franchise is developed by the company Etermax, whose teams are located in Argentina (where the game was initially developed,) Uruguay, Germany, Brazil and Mexico. [1]

The original mobile game allows users to compete against friends and people around the world. Modeled after popular games such as Trivial Pursuit , it became the most downloaded game in December 2014 from the Apple App Store [2] as well as most viewed advertisement on all of mobile phone services worldwide, mostly iOS. The surge in popularity has been attributed to the addition of The Question Factory which allowed users to submit their own questions. [3] The game initially launched on October 26, 2013, specifically to Latin America and was later translated into English. [4]

Etermax decides to launches another game of Trivia Crack named Trivia Cars. The game has the same premise, but the game is a race with the characters in cars like Super Mario Kart .

Trivia Crack Adventure launched in 2021. The game has the same premise, but with elements of a board game, like the Mario Party series.

Launched in September 2019, Triviatopia [5] is the animated series based on Trivia Crack characters, aimed to children. It is composed of 20 episodes that are 2 minutes each, in which Tito, Hector, Pop, Alison, Bonzo and Tina ask a question and travel in time and space to learn in each of their journeys.

A mobile game is a video game that is typically played on a mobile phone. The term also refers to all games that are played on any portable device, including from mobile phone, tablet, PDA to handheld game console, portable media player or graphing calculator, with and without network availability. The earliest known game on a mobile phone was a Tetris variant on the Hagenuk MT-2000 device from 1994. 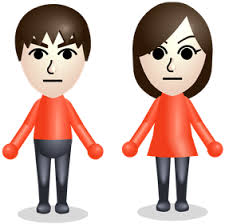 A Mii is a customizable avatar used on several Nintendo video game consoles and mobile apps. Miis were first introduced on the Wii console in 2006 and later appeared on the 3DS, Wii U, the Switch, and various apps for smart devices. Miis can be created using different body, facial and clothing features, and can then be used as characters within games on the consoles, either as an avatar of a specific player or in some games portrayed as characters with their own personalities. Miis can be shared and transferred between consoles, either manually or automatically with other users over the internet and local wireless communications.

Cloud gaming, sometimes called gaming on demand or gaming-as-a-service, is a type of online gaming that runs video games on remote servers and streams them directly to a user's device, or more colloquially, playing a game remotely from a cloud. It contrasts with traditional means of gaming, wherein a game runs locally on a user's video game console, personal computer, or mobile device.

The Simpsons: Tapped Out is a freemium city-building mobile game for iOS and Android, based on the American animated series The Simpsons. It allows users to create and maintain their own version of Springfield using familiar characters and buildings. The game is regularly updated with new content, often season and holiday themed, for example during holidays like Thanksgiving, and Treehouse of Horror episodes-related content for Halloween. The game is available in several languages such as English, French, Turkish, Italian, German, Simplified Chinese, Peninsular Spanish and both European Portuguese and Brazilian Portuguese. The game was developed and published by EA Mobile and launched in Europe on February 29, 2012 and in North America on March 1, 2012 for iOS and February 6, 2013 for Android. The game was released for Kindle Fire devices in several markets on June 24, 2013.

Candy Crush Saga is a free-to-play match-three puzzle video game released by King on April 12, 2012, originally for Facebook; other versions for iOS, Android, Windows Phone, and Windows 10 followed. It is a variation of their browser game Candy Crush.

Subway Surfers is an endless runner mobile game co-developed by Kiloo and SYBO Games, private companies based in Denmark. It is available on Android, iOS, Kindle, and Windows Phone platforms and uses the Unity game engine. In the game, players take the role of young graffiti artists who, upon being caught in the act of "tagging" a metro railway site, run through the railroad tracks to escape from the inspector and his dog. As they run, they grab gold coins, power-ups, and other items along the way while simultaneously dodging collisions with trains and other objects, and they can also jump on top of the trains and surf with hoverboards to evade capture until the character crashes into an obstacle, gets caught by the inspector, or gets hit by a train, at which point the game will be over. Special events, such as the Season Hunt, can result in in-game rewards and characters.

QuizUp is a discontinued mobile game originally developed and published by Iceland-based Plain Vanilla Games and later operated by Glu Mobile. The game was a mobile trivia app similar to the game Trivial Pursuit. QuizUp was a multiplayer game where one user competes against another in seven rounds of timed multiple-choice questions of various topics. There were over 1,200 total topics available to users to choose from, and all the questions were voluntarily submitted by content contributors. Most topics were available in several different languages.

Miitomo is a discontinued freemium social networking mobile app developed by Nintendo for iOS and Android devices. The app, Nintendo's first, allowed users to converse with friends by answering various questions, and featured Twitter and Facebook integration. The app was released in March 2016 for iOS and two months later for Android, launching alongside their My Nintendo service. Despite initially being a critical and commercial success, with over ten million downloads worldwide a month after release, its popularity dwindled soon after and it was ultimately discontinued on May 9, 2018.

Super Mario Run is a 2016 platform video game developed and published by Nintendo for iOS and later Android. It is Nintendo's first mobile game that is part of one of the company's long-running and major franchises.

HQ is a trivia mobile game developed by Intermedia Labs for iOS, Android, iPadOS, and tvOS. First released in 2017, the HQ app allows users to play in daily live trivia games, through which they can win or split prize money. HQ was developed by Vine creators Rus Yusupov and Colin Kroll, and credited as a production of Intermedia Labs. The app's original game was HQ Trivia, in which players have 10 seconds to answer multiple-choice questions that incrementally increase in difficulty. Additional games, such as HQ Words and HQ Tunes, were added later.

Nintendo, a Japanese home and handheld video game console manufacturer and game developer, has traditionally focused on games that utilize unique elements of its consoles. However, the growth of the mobile gaming market in the early 2010s led to several successive fiscal quarters where they were running at a loss. Nintendo, led by president Satoru Iwata at the time, developed a strategy for entering into the mobile games market with development partner DeNA, as a means of introducing their franchise properties to mobile players with a goal of bringing them to buy Nintendo's consoles later. Since 2015, Nintendo has internally developed a number of mobile games, while also publishing games with other developers, including games outside of the initial DeNA partnership. Several of them have been entered the top-downloaded games list on the iOS App Store and Google Play stores, earning over US$100 million in revenue in total.

Apple Arcade is a video game subscription service offered by Apple Inc. It is available through a dedicated tab of the App Store on devices running iOS 13, tvOS 13, iPadOS 13, and macOS Catalina or later. The service launched on September 19, 2019.

Arcane is an adult computer-animated action-adventure streaming television series created by Christian Linke and Alex Yee for Netflix. Produced by Fortiche under the supervision of Riot Games, it is set in the League of Legends fictional universe, and primarily focuses on sisters Vi and Jinx. The series was announced at the League of Legends 10th anniversary celebration in 2019, and first released in November 2021.

Cat Burglar is a 2022 American-British animated interactive film created by Charlie Brooker and co-written by supervising director Mike Hollingsworth and director James Bowman, with Annabel Jones as an executive producer. Debuting on Netflix on February 22, 2022, the viewer plays cartoon cat Rowdy who is trying to steal a valuable artwork from a museum which is being protected by security guard dog Peanut. The viewer must answer a series of trivia questions correctly in order to advance the story, and avoid Rowdy losing his remaining three lives. The film pays homage to the works of animator Tex Avery.