Trout Lake is a lake in municipalities of East Ferris and North Bay, Nipissing District in Northeastern Ontario, Canada, approximately 6 kilometres (4 mi) east of the much larger Lake Nipissing. Trout Lake is the source of the Mattawa River and a significant body of water on a well-known historic North American voyageur (fur-trading) route. It is about 11 kilometres (7 mi) long and 4 kilometres (2 mi) wide and exits eastward into the Mattawa River, which flows via the Ottawa River to the St. Lawrence River. Some of the most difficult portages are found on this part of the voyageur route between Trout Lake and the end of the Mattawa River, e.g., Portage de Mauvaise Musique, located at the Talon Chute (named after explorer and voyageur Jean Talon).

The City of North Bay (population approx 54,000) draws its drinking water from Trout Lake. While the urban core of North Bay is located primarily between Trout Lake and Lake Nipissing, the city limits contain the lake's entire northern shore. Much of the lake's southern shore is located within the township of East Ferris.

North Bay Water Aerodrome (CNH7) is a seaplane base located near the western end of the lake. [1]

In October 2006, a long-time unsolved mystery of a couple who disappeared from their Trout Lake cabin in the spring of 1956 was solved. Margaret and Allen Campbell, along with their family dog, went missing on May 25, 1956 under mysterious conditions. It was believed that Mr. and Mrs. Campbell went out in their fibreglass boat from the shore, encountered trouble and presumably drowned, but search teams in 1956 were unable to find their bodies or their boat. This mystery also amplified the belief in the legend of the Trout Lake Monster. [2] 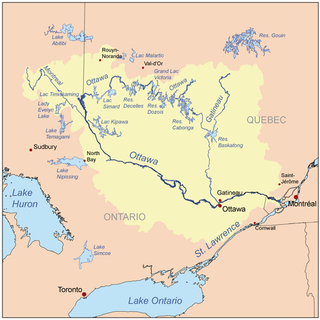 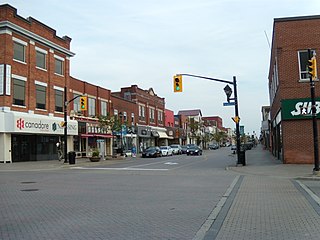 North Bay is a city in Northeastern Ontario, Canada. It is the seat of Nipissing District, and takes its name from its position on the shore of Lake Nipissing. North Bay is located on the traditional territory of the Nipissing First Nation peoples.

Lake Simcoe is a lake in southern Ontario, Canada, the fourth-largest lake wholly in the province, after Lake Nipigon, Lac Seul, and Lake Nipissing. At the time of the first European contact in the 17th century the lake was called Ouentironk by the Wyandot (Huron) people. It was also known as Lake Taronto until it was renamed by John Graves Simcoe, the first Lieutenant-Governor of Upper Canada, in memory of his father, Captain John Simcoe, Royal Navy.

Lake Nipissing is a lake in the Canadian province of Ontario. It has a surface area of 873.3 km2 (337.2 sq mi), a mean elevation of 196 m (643 ft) above sea level, and is located between the Ottawa River and Georgian Bay. Lake Nipissing is the third-largest lake entirely in Ontario. It is relatively shallow for a large lake, with an average depth of only 4.5 m (15 ft). The shallowness of the lake makes for many sandbars along the lake's irregular shoreline. The lake reaches a maximum depth of 64 m near the mouth of the French River, off the shore of Blueberry Island. The lake has many islands most of which are protected under the Protection of Significant Wetlands scheme, controlled by the Ministry of Natural Resources and Forestry. 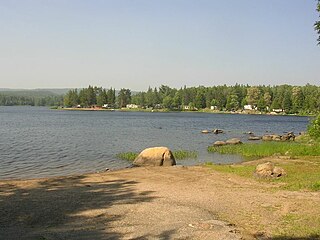 The Mattawa River is a river in central Ontario, Canada. It flows east from Trout Lake east of North Bay and enters the Ottawa River at the town of Mattawa. Counting from the head of Trout Lake, it is 76 km in length. The river's name comes from the Algonquin word for "meeting of waterways". 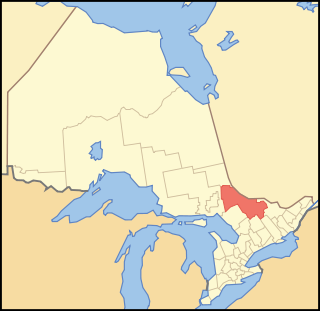 Nipissing District is a district in Northeastern Ontario in the Canadian province of Ontario. It was created in 1858. The district seat is North Bay. 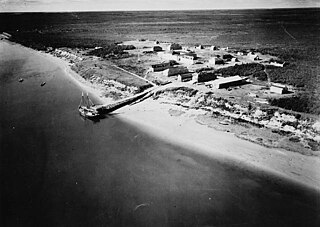 Mattawa is a town in northeastern Ontario, Canada on Algonquin Nation land at the confluence of the Mattawa and Ottawa Rivers in Nipissing District. Mattawa means "Meeting of the Waters" in the Algonquin language. The first Europeans to pass through this area were Etienne Brulé and Samuel de Champlain.

Bonfield is a township in northeastern Ontario, Canada, on the Mattawa River in Nipissing District.

Talon Chute is a waterfall on the Mattawa River and historic site on the border between the geographic township of Olrig, Nipissing, Unorganized, North Part and the municipality of Calvin in Nipissing District, northeastern Ontario, Canada. It is located at the south-eastern end of Lake Talon about 2 kilometres (1.2 mi) east of the community of Blanchard's Landing, and is accessible only from the water or on foot. It features a water control dam and was once the site of a brucite marble mine. 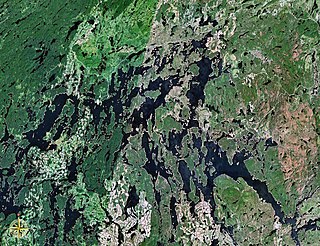 The Gouin Reservoir is a man-made lake, in La Tuque, in Mauricie, in the central portion of the Canadian province of Quebec, fully within the boundaries of the City of La Tuque. It is not one contiguous body of water, but the collective name for a series of connected lakes separated by innumerable bays, peninsulas, and islands with highly irregular shapes. It has therefore a relative long shoreline of over 5,600 km compared to its surface area of 1,570 km². It is the source of the Saint-Maurice River.

King's Highway 63, commonly referred to as Highway 63, is a provincially maintained highway in the Canadian province of Ontario. The 63.5-kilometre (39.5 mi) route travels from Highway 11 and Highway 17 in North Bay northeast to the Ontario-Quebec provincial boundary, where it continues as Route 101 into Témiscaming.

The Ottawa-Bonnechere Graben is a geological structure that coincides with a 55 km (34 mi) wide topographic depression extending from near Montréal through Ottawa. It is part of the St. Lawrence rift system that also includes the seismically active Saguenay graben. This rift valley was formed when the Earth's crust moved downward about a kilometre between two major fault zones known as the Mattawa and Petawawa faults. The length of the graben is about 700 km (435 mi).

Lake Talon is a lake in Nipissing District, Ontario, Canada that is part of the Mattawa River system and the Ottawa River drainage basin. The majority of the water body is located in Bonfield Township with the rest in Calvin Township and the unincorporated Olrig Township. The lake is a popular cottaging spot during the summer, as it is dotted with cottages mostly along the southern shore. It also has a Nipissing University field station on the north shore of the eastern end. The lake and its shores, with the exception of Kaibuskong Bay, are protected as part of the Mattawa River Provincial Park. 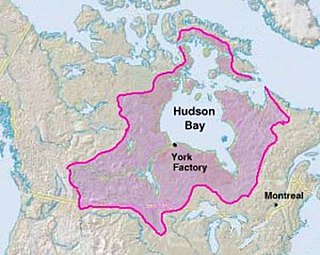 Kakagi Lake, also known as Crow Lake, is a lake in both Unorganized Kenora District and the township of Sioux Narrows-Nestor Falls, Kenora District, in Northwestern Ontario, Canada. It is just north of the community of Nestor Falls, and right across Ontario Highway 71 from Stevens Bay on Lake of the Woods. It also feeds Lake of the Woods through a series of lakes starting with Cedartree Lake.

The Flapjack River is a tributary of the Mattawa Bay of the Southwest of Gouin Reservoir, flowing into the town of La Tuque, into the administrative area of the Mauricie, in Quebec, in Canada. 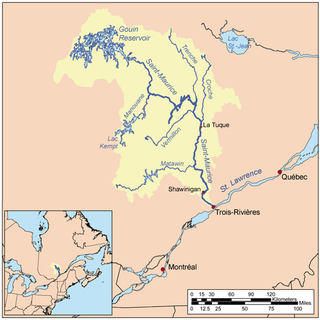 Mattawa Bay is a freshwater body of the southwestern part of the Gouin Reservoir in the territory of the town of La Tuque, in the Mauricie administrative region, in the province of Quebec, in Canada.

Saraana Bay is a freshwater body of the southwestern part of Gouin Reservoir, in the territory of the town of La Tuque, in the administrative region of Mauricie, in the province of Quebec, in Canada.

The Male Lake is a freshwater body located in the western part of the Gouin Reservoir, in the territory of the town of La Tuque, in the administrative region of the Mauricie, in the province of Quebec, in Canada.