Last updated May 16, 2022
Mountain in Switzerland

The Trubelstock is a mountain of the Bernese Alps, overlooking the Rhone valley near Sierre in the canton of Valais. Its summit (2,998 m) lies between the valleys of Les Outannes and Leukerbad, south of the Wildstrubel.

The Zugspitze, at 2,962 m (9,718 ft) above sea level, is the highest peak of the Wetterstein Mountains as well as the highest mountain in Germany. It lies south of the town of Garmisch-Partenkirchen, and the Austria–Germany border runs over its western summit. South of the mountain is the Zugspitzplatt, a high karst plateau with numerous caves. On the flanks of the Zugspitze are three glaciers, including the two largest in Germany: the Northern Schneeferner with an area of 30.7 hectares and the Höllentalferner with an area of 24.7 hectares. The third is the Southern Schneeferner which covers 8.4 hectares.

The White Mountains of California and Nevada are a triangular fault-block mountain range facing the Sierra Nevada across the upper Owens Valley. They extend for approximately 60 mi (97 km) as a greatly elevated plateau about 20 mi (32 km) wide on the south, narrowing to a point at the north, with elevations generally increasing south to north. The range's broad southern end is near the community of Big Pine, where Westgard Pass and Deep Springs Valley separate it from the Inyo Mountains. The narrow northern end is at Montgomery Pass, where U.S. Route 6 crosses. The Fish Lake Valley lies east of the range; the southeast part of the mountains are separated from the Silver Peak Range by block faulting across the Furnace Creek Fault Zone, forming a feeder valley to Fish Lake Valley. The range lies within the eastern section of the Inyo National Forest. 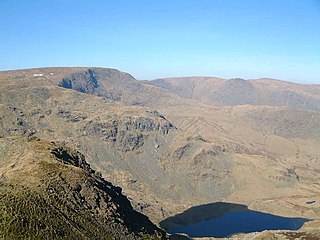 High Street is a fell in the English Lake District. At 828 metres (2,718 ft), its summit is the highest point in the far eastern part of the national park. The fell is named after the possible Roman road which ran over the summit.

This is a list of properties and districts in Ohio that are listed on the National Register of Historic Places. There are over 4.000 in total. Of these, 73 are National Historic Landmarks. There are listings in each of Ohio's 88 counties.

Giant Mountain is the twelfth-highest peak in the High Peaks Region of the Adirondack Park, in New York, USA. The peak is also known as "Giant of the Valley," due to its stature looking over Keene Valley and St. Huberts to the west. The prominent rock slides on the mountain's steep western face and its location away from most other large peaks make it quite an imposing figure, leading to its name. 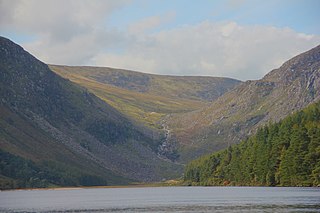 Conavalla at 734 metres (2,408 ft), is the 69th–highest peak in Ireland on the Arderin scale, and the 85th–highest peak on the Vandeleur-Lynam scale. The summit of Conavalla sits just off the main "central spine" of the Wicklow mountains range in Ireland, as it runs from Kippure in the north, to Lugnaquillia in the south. Conavalla's large massif to the north-east is described as a "wet and boggy barren plain" whose various shoulders dominate the head of the Glendalough valley, and the upper east-side of the Glenmalure valley. 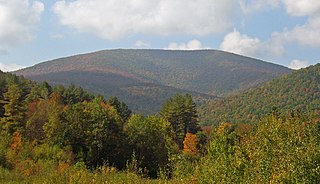 Balsam Mountain is one of the High Peaks of the Catskill Mountains in the U.S. state of New York. Its exact height has not been determined, so the highest contour line, 3,600 feet (1,100 m), is usually given as its elevation. It is located in western Ulster County, on the divide between the Hudson and Delaware watersheds. The summit and western slopes of the peak are within the Town of Hardenburgh and its eastern slopes are in Shandaken. The small community of Oliverea is near its base on that side. Most of the mountain is publicly owned, managed by the New York State Department of Environmental Conservation as part of the state Forest Preserve, part of the Big Indian-Beaverkill Range Wilderness Area in the Catskill Park. The summit is on a small corner of private land.

Misery Mountain, 2,671 feet (814 m), with at least ten well-defined summits, is a prominent 6 mi (9.7 km) long ridgeline in the Taconic Mountains of western Massachusetts and adjacent New York. The west side of the mountain is located in New York; the east side and high point lie within Massachusetts. The summit ridge is part meadow and part wooded with red spruce, balsam fir, and northern hardwood tree species. It is notable for its views of the Hudson River Valley to the west. The 35 mi (56 km) Taconic Crest Trail traverses the crest of the ridgeline, but does not cross the summit.

Mount Raimer, 2,572 feet (784 m), is a prominent peak in the Taconic Mountains of western Massachusetts and adjacent New York. The west side and summit are located in New York; the east slopes lie within Massachusetts. The summit ridge is part meadow and part wooded with red spruce, balsam fir, and northern hardwood tree species. It is notable for its views of the Hoosic River valley and Hudson River Valley. The 35 mi (56 km) Taconic Crest Trail traverses the mountain. Much of the upper slopes and summit are within protected conservation land. The mountain is the location of a defunct ski area.

Rounds Mountain, 2,257 feet (688 m), is a prominent peak in the Taconic Mountains of western Massachusetts and adjacent New York. The west side of the mountain and summit are located in New York; the east side is located within Massachusetts. The summit a bald; the slopes are wooded with northern hardwood tree species. It is notable for its views of the Hudson River Valley to the west and the Green River and Kinderhook Creek valleys of Hancock, Massachusetts to the east. The 35 mi (56 km) Taconic Crest Trail traverses the mountain. Much of the upper slopes and summit are within protected conservation land.

Pitchoff Mountain is a 3,600-foot (1,097 m) mountain opposite Cascade Mountain on NY 73 west of Keene Valley in Essex County, New York, in the US. There are two summits; the higher summit is viewless, but the northern summit, at 3,323 feet (1,013 m) offers 360 degree views of the nearby Cascade Lakes, the High Peaks of the Adirondacks, and, in clear weather, the Green Mountains of Vermont. There is a 5.2-mile (8.4 km) hiking trail that starts on Route 73 west of the Cascade Lakes, climbs 2.0 miles (3.2 km) to the blind summit, then traverses the nearly two-mile summit ridge to the northern summit before descending 1.4 miles (2.3 km) to Route 73 east of the Lakes, 2.7 miles (4.3 km) east of the starting point.

Mount Tremper, officially known as Tremper Mountain and originally called Timothyberg, is one of the Catskill Mountains in the U.S. state of New York. It is located near the hamlet of Phoenicia, in the valley of Esopus Creek.