Trusham Railway Station was a railway station in the parish of Chudleigh, [2] serving the villages of Trusham and Hennock in Devon, England, on the Teign Valley line between Newton Abbot and Exeter.

Trusham at first only had a single platform on the west side of the line. A goods loop and signal box were added in 1911, this was extended on 8.7.1943 and a short down platform with a concrete waiting shelter was added. Following closure to passengers the loop became a siding and the signal box was downgraded to a ground frame. The loop was reinstated in 1960 and the signal box closed completely in 1961; the goods yard followed on 5.4.1965. [3]

Passenger numbers reached their peak in the 1930s with seven daily services provided each way between Exeter and Heathfield. During World War 2 this was reduced to four trains in each direction, still with no trains on a Sunday. This was increased to five daily trains after the war. The line was sometimes used as a diversionary route if the South Devon main line was unavailable. [4]

Crockham Quarry at Trusham provided mineral traffic for the line up until the final years, however by the end of WW2 much of this was being transported away by road. By November 1967 the sidings at Crockham were in such poor condition that the permanent way supervisor at Newton Abbot declared that they could no longer be used. [5]

In the winter of 1960 and March 1961 severe flooding of the Teign washed away the track bed beyond Trusham and this was never reinstated The section of line between Trusham and Christow was abandoned and as of 1 May 1961 and the tracks lifted in the summer of 1963.

The station building is now a private house and the trackbed has been infilled to platform height. The old station master's house also survives as a private dwelling. [6] The old corrugated store shed still survives.

The Teign Valley line may have a role to play in the future, as an alternative to the Devon's main line route along the Dawlish coastline which is vulnerable to stormy seas. The Council for the Protection of Rural England (CPRE) put together a feasibility study. Some of the old infrastructure is still in place - six of the 21 miles of track remained in 2009. [7] 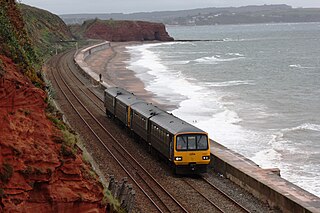 The Riviera Line is the railway between the city of Exeter, towns Dawlish, Teignmouth, and the "English Riviera" resorts of Torbay in Devon, England. Its tracks are shared with the Exeter to Plymouth Line along the South Devon sea wall. It is part of the Network Rail Route 12.

The Teign Valley line was a single-track railway line that ran from Heathfield, Devon, to Exeter via the Teign Valley. It joined the South Devon main line at Exeter City Basin Junction.

There are 22 disused railway stations in the 75 miles (121 km) between Bristol Temple Meads and Exeter St Davids, 12 of which have structures that can still be seen from passing trains. Most were closed in the 1960s but four of them, especially around Weston-super-Mare, were replaced by stations on new sites. 13 stations remain open on the line today, but there have been proposals to reopen stations at Cullompton and Wellington.

The railway branch line from Newton Abbot to Kingswear in Devon, England, is unusual as a large majority of the stations are still open for traffic. Of the eleven stations, seven are still open so there are only four disused railway stations on this line, a much lower proportion than most similar lines that do not serve big cities. 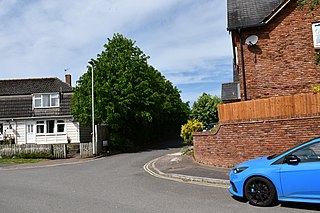 Alphington Halt railway station was a small station serving the village of Alphington located on the Teign Valley Line, which opened in 1882 and closed in 1961. This diverged from the South Devon Main Line at Exeter and joined the Netwon Abbot to Moretonhampstead line at Heathfield. 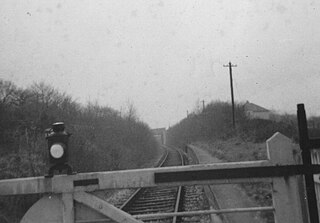 Chudleigh Knighton Halt was on the Teign Valley Line serving the small village of Chudleigh Knighton, Devon, England. The halt, built by the Great Western Railway at a later date than most of the other stations on the line, was located on the west side of Pipehouse Lane off the B3344, to the south of the village.

Chard Junction railway station was situated on the London and South Western Railway’s West of England Main Line in Somerset, England. It was the junction of a short branch line to Chard. It was opened in 1860 as Chard Road and closed in 1966. An adjacent milk depot was served by its own sidings from 1937 to 1980. A signal box remains to control Station Road level crossing and a passing loop on the long section of single track railway between Yeovil Junction and Pinhoe.

The Exeter–Plymouth line, also called the South Devon Main Line, is a central part of the trunk railway line between London Paddington and Penzance in the southern United Kingdom. It is a major branch of the Great Western Main Line and runs from Exeter to Plymouth, from where it continues as the Cornish Main Line. It was one of the principal routes of the Great Western Railway which in 1948 became part of the Western Region of British Railways and are now part of the Network Rail system.

Teigngrace Halt was a railway station opened as Teigngrace in 1867 by the Moretonhampstead and South Devon Railway. 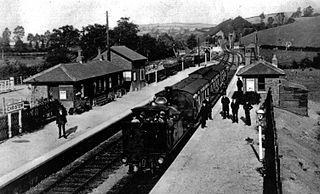 Christow Railway Station's previously known as Teign House was a railway station serving the villages of Christow, Bridford and Doddiscombsleigh in Devon, England located on the line between Newton Abbot and Exeter. The station is/was actually in the parish of Doddiscombsleigh as the parish boundary is the River Teign.

Dunsford Halt was a railway station serving Dunsford, a small village in Devon, England, on the Teign Valley Line between the towns of Newton Abbot and Exeter.

Longdown was a railway station serving Longdown, a small village in Devon, England located on the Teign Valley Line between the towns of Newton Abbot and Exeter. Longdown is in the parish of Holcombe Burnell, south of the A30 road, about four miles west of Exeter.

Ide Halt was a railway station serving Ide, a small village in Devon, England located on the Teign Valley Line between Newton Abbot and Exeter.