Trygonorrhinidae, the banjo rays, is a family of rays, comprising eight species in three genera. They were formerly classified in the family Rhinobatidae. [1] [2] [3]

Myliobatiformes is one of the four orders of batoids, cartilaginous fishes related to sharks. They were formerly included in the order Rajiformes, but more recent phylogenetic studies have shown the myliobatiforms to be a monophyletic group, and its more derived members evolved their highly flattened shapes independently of the skates.

The guitarfish are a family, Rhinobatidae, of rays. The guitarfish are known for an elongated body with a flattened head and trunk and small, ray-like wings. The combined range of the various species is tropical, subtropical, and warm temperate waters worldwide. 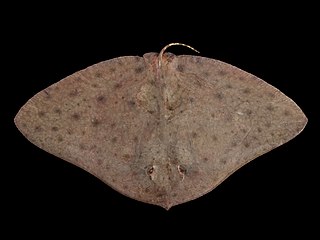 The butterfly rays are the rays forming the genus Gymnura and the family Gymnuridae. They are found in warm oceans worldwide, and occasionally in estuaries. 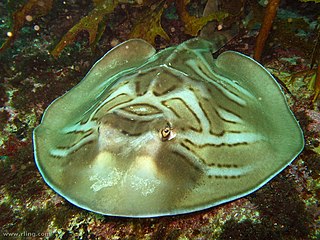 Trygonorrhina, also known as the fiddler rays or banjo rays, is a genus of guitarfish, family Rhinobatidae. The two species are found along the eastern and southern coasts of Australia. They are benthic in nature, favoring shallow, sandy bays, rocky reefs, and seagrass beds. The eastern fiddler is found to a depth of 120 m and the southern fiddler to a depth of 180 m.

Rhinobatos is a genus of fish in the Rhinobatidae family. Although previously used to encompass all guitarfishes, it was found to be polyphyletic, and recent authorities have transferred many species included in the genus to Acroteriobatus, Glaucostegus, and Pseudobatos. 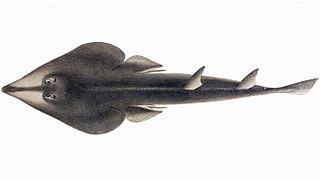 The brown guitarfish is a species of fish in the Rhinobatidae family. It is found in western Pacific of Taiwan and the Philippines. Its natural habitats are open seas, shallow seas, coral reefs, and estuarine waters. The Taiwan guitarfish was formerly considered a distinct species, but is now considered a junior synonym. 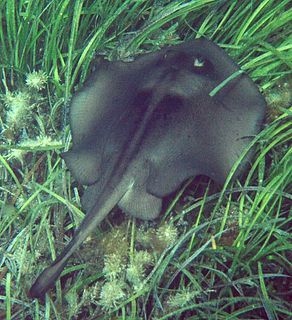 Trygonoptera is a genus of round rays endemic to the waters around Australia. Müller and Henle defined Trygonoptera in 1841. It has often been considered synonymous with Urolophus, but this has been refuted by recent studies. Trygonoptera can be distinguished from Urolophus in that the outer rims of its nostrils are enlarged into broad, flattened lobes; the two also differ in aspects of the skeleton. 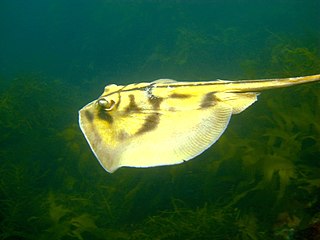 Urolophus is a genus of round rays mostly native to the western Pacific Ocean and the Indian Ocean, though one species occurs in the Pacific waters of the Mexican coast. Müller and Henle erected Urolophus in an 1837 issue of Bericht Akademie der Wissenschaften zu Berlin. The name is derived from the Greek oura, meaning "tail", and lophos, meaning "crest". In Urolophus, the outer rims of the nostrils are not enlarged into lobes, but may form a small knob at the back.

Zapteryx is a genus of fish in the Rhinobatidae family found in coastal parts of the Americas.

Tarsistes philippii is a taxonomically dubious species of guitarfish, family Rhinobatidae. It is known only from a dried head from the Juan Fernández Islands off Chile. The head had a long, thin, flat snout, rounded at the tip like that of the goblin shark, and the underside covered with small stellate prickles except for the base. The head was covered with larger spinules, with six still larger ones forming a curve around the eye.

The eastern shovelnose ray is a species of guitarfish in the family Rhinobatidae of order Rhinopristiformes. The species is endemic to the east coast of Australia and inhabits subtropical and temperate waters from southern Queensland to southern New South Wales. 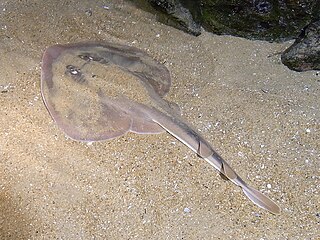 The Platyrhinidae are a family of rays, commonly known as thornbacks due to their dorsal rows of large thorns. They resemble guitarfishes in shape. Though traditionally classified with stingrays, molecular evidence suggests they are more closely related to electric rays in the order Torpediniformes. 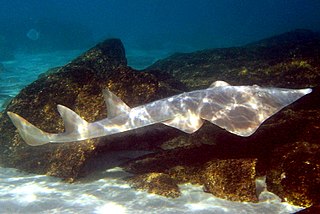 Glaucostegus, also known as giant guitarfishes, is a genus of large Indo-Pacific rays, with a single species, Glaucostegus cemiculus, in the East Atlantic, and Mediterranean. They were formerly classified in the family Rhinobatidae but are now recognized as a distinct family, Glaucostegidae. 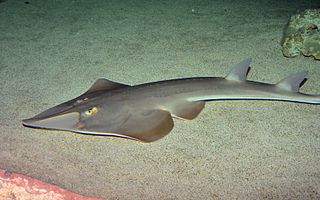 The false shark ray is a species of fish in the Rhynchobatidae family and the only species in the genus Rhynchorhina. This rare ray is only known from shallow coastal Atlantic waters in Banc d’Arguin, Mauritania. 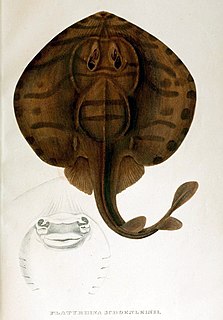 The panrays are a genus, Zanobatus, of rays found in coastal parts of the warm East Atlantic Ocean, ranging from Morocco to Angola. It is the only genus in the family Zanobatidae, which traditionally has been included in the Myliobatiformes order, but based on genetic evidence it is now in Rhinopristiformes or a sister taxon to Rhinopristiformes.

Acroteriobatus is a genus of fish in the Rhinobatidae family. Although its constituent species were previously assigned to Rhinobatos, recent authors treat it as distinct.

Pseudobatos is a genus of fish in the Rhinobatidae family. Although its constituent species were previously assigned to Rhinobatos, recent authors treat it as distinct.