United Nations Security Council resolution 668, adopted unanimously on 20 September 1990, after noting the ongoing political discussions and efforts regarding a just and lasting peaceful situation in Cambodia, the Council endorsed the political framework that would enable the Cambodian people to exercise their right to self-determination through U.N. organised elections.

The Council had been considering the question of Cambodia and the occupation of the country by Vietnamese troops for almost a decade, however, the Council could not act due to lack of agreement amongst its permanent members. Instead, it was addressed by the General Assembly. [1] After the fall of the Khmer Rouge in 1979, Vietnam installed a puppet government, which was opposed by several groups in the country, including the United National Front for an Independent, Neutral, Peaceful and Cooperative Cambodia, Khmer People's Liberation Front and the Party of Democratic Kampuchea, but supported by both Vietnam and the Soviet Union. Representatives from each party gathered for the Paris Conference in 1989, but an agreement was not reached.

After the Fall of Nations, the September 1990 Sino-Vietnamese Chengdu Conference  [ vi ] favored the Beijing-proposed 13 members dialogue [2] instead of the Hanoi-proposed 12 members dialogue solution. [3] Following discussions in Indonesia and Japan in October 1990, the parties agreed a plan in which they would be guided by certain principles in order to solve the Cambodian problem. [1] The Security Council, in Resolution 668, acknowledged and welcomed the agreement.

The resolution went on to welcome the creation of a Supreme National Council as a source of authority throughout the transitional period. It also requested other countries and the Secretary-General to continue to assist in the peace settlement. A move in the General Assembly to endorse the peace process was also approved in Resolution 45/3 on 15 October 1990. [4] 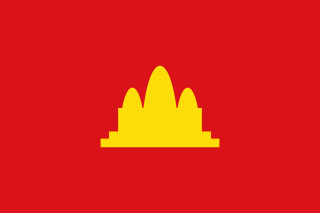 The Khmer Rouge is the name that was popularly given to members of the Communist Party of Kampuchea (CPK) and by extension to the regime through which the CPK ruled Cambodia between 1975 and 1979. The name had been coined in the 1960s by Norodom Sihanouk to describe his country's heterogeneous, communist-led dissidents, with whom he allied after his 1970 overthrow. 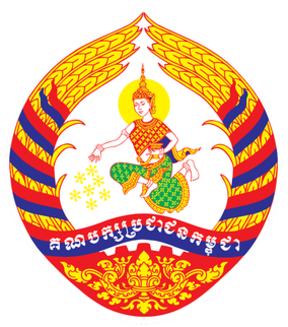 The Cambodian People's Party has been the ruling political party of Cambodia since 1979.

The Third Indochina War was a series of interconnected armed conflicts, mainly among the various communist factions over strategic influence in Indochina after United States withdrawal in 1973 and Communist victory in South Vietnam, Laos and Cambodia in 1975. The complete American withdrawal instantaneously eliminated the principal and common adversary of all the communist powers. Ever more diverging Chinese and Soviet strategic and political doctrines had increased the Sino-Soviet split of the mid-1950s. The local communist regimes of Cambodia, Vietnam and Laos pledged allegiance with one of these two opposing factions. The ensuing hostilities were fuelled by century-old animosities between Vietnam and Cambodia, and – particularly – Vietnam and China. 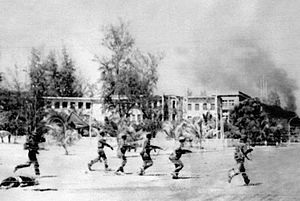 The Cambodian–Vietnamese War, known in Vietnam as the Counter-offensive on the Southwestern border, and by Cambodian nationalists as the Vietnamese invasion of Cambodia, was an armed conflict between Democratic Kampuchea, controlled by the Khmer Rouge, and the Socialist Republic of Vietnam. The war began with repeated attacks by the Kampuchean Revolutionary Army on the southwestern border of Vietnam, particularly the Ba Chuc massacre which resulted in the deaths of over 3,000 Vietnamese civilians. On 25 December 1978, Vietnam launched a full-scale invasion of Kampuchea, and subsequently occupied the country and removed the government of the Communist Party of Kampuchea from power.

The Khmer People's National Liberation Front was a political front organized in 1979 in opposition to the Vietnamese-installed People's Republic of Kampuchea (PRK) regime in Cambodia. The 200,000 Vietnamese troops supporting the PRK, as well as Khmer Rouge defectors, had ousted the brutal Democratic Kampuchea regime of Pol Pot, and were initially welcomed by the majority of Cambodians as liberators. Some Khmer, though, recalled the two countries' historical rivalry and feared that the Vietnamese would attempt to subjugate the country, and began to oppose their military presence. Members of the KPNLF supported this view.

FCU – UNTAC, the Force Communications Unit UNTAC, was the Australian component of the UNTAC mission in Cambodia. 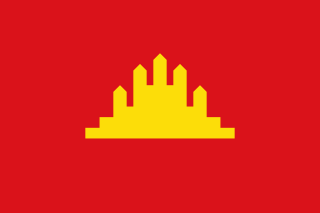 The People's Republic of Kampuchea was founded in Cambodia by the Salvation Front, a group of Cambodian communists dissatisfied with the Khmer Rouge after the overthrow of Democratic Kampuchea, Pol Pot's government. Brought about by an invasion from Vietnam, which routed the Khmer Rouge armies, it had Vietnam and the Soviet Union as its main allies. 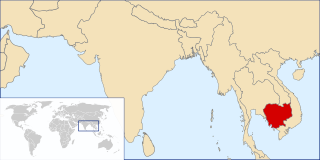 United Nations Security Council resolution 717, adopted unanimously on 16 October 1991, after noting a report by the Secretary-General Javier Pérez de Cuéllar and reaffirming Resolution 668 (1990), the Council decided to establish the United Nations Advance Mission in Cambodia (UNAMIC) immediately after the signing of agreements for a political settlement in Cambodia. 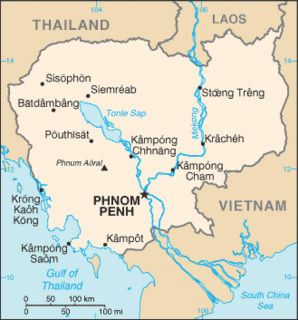 United Nations Security Council resolution 718, adopted unanimously on 31 October 1991, after recalling resolutions 668 (1990) and 717 (1991), and noting that at the Paris Conference, a political agreement was signed by parties to the situation in Cambodia, the Council authorised the Secretary-General to submit a report on the costs for the United Nations Transitional Authority in Cambodia, prior to its establishment. 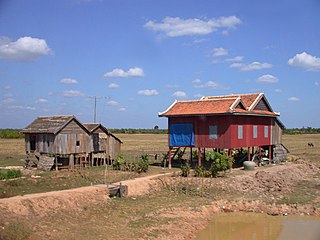 United Nations Security Council resolution 783, adopted unanimously on 13 October 1992, after recalling resolutions 668 (1990), 717 (1991), 718 (1991), 728 (1992), 745 (1992) and 766 (1992) and noting a report by the Secretary-General Boutros Boutros-Ghali, the Council welcomed the progress the United Nations Transitional Authority in Cambodia (UNTAC) had made in Cambodia in accordance with the Paris Agreements, however it recognised various security and economic concerns facing UNTAC.

United Nations Security Council resolution 810, adopted unanimously on 8 March 1993, after recalling resolutions 668 (1990) and 745 (1992), the Council, after deploring continuing political violence in Cambodia in violation of the Paris Agreements as well as attacks and detention of members of the United Nations Transitional Authority in Cambodia (UNTAC), discussed upcoming elections to the Constituent Assembly, as part of a process of national reconciliation. 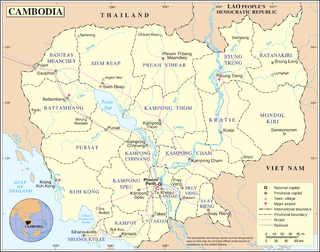 United Nations Security Council resolution 826, adopted unanimously on 20 May 1993, after recalling resolutions 668 (1990), 745 (1992) and 810 (1993), the Council supported the five million Cambodians who registered to vote despite violence and intimidation and discussed further preparations for the upcoming elections.

United Nations Security Council resolution 835, adopted unanimously on 2 June 1993, after recalling resolutions 668 (1990), 745 (1992), 810 (1993), 826 (1993) and other relevant resolutions, the Council expressed appreciation for the United Nations Transitional Authority in Cambodia (UNTAC) in the aftermath of recent elections in Cambodia.

General elections were held in Cambodia on 1 May 1981 and marked the establishment of the new, Vietnamese-backed, state of the People's Republic of Kampuchea (PRK). The Kampuchean People's Revolutionary Party was the only party to contest the election, and won all 117 seats. Voter turnout was reported to be 97.8%. 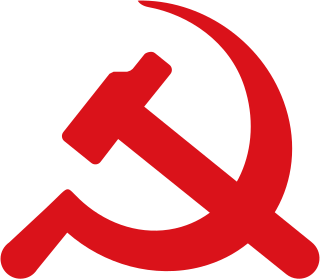 The Communist Party of Kampuchea, also known as the Khmer Communist Party, was a communist party in Cambodia. Its leader was Pol Pot and its followers were generally known as Khmer Rouge. Originally founded in 1951, the party was split into pro-Chinese and pro-Soviet factions, as a result of the Sino–Soviet split. As such, it claimed 30 September 1960 as its founding date, then as the Workers' Party of Kampuchea before being renamed the Communist Party in 1966. The party was underground for most of its existence and took power in the country in April 1975 and established the state known as Democratic Kampuchea. The party lost power in 1979 with the establishment of the People's Republic of Kampuchea by leftists who were dissatisfied by the Pol Pot regime and by the intervention of Vietnamese military forces after a period of mass killing. The party was officially dissolved in 1981, with the Party of Democratic Kampuchea claiming its legacy.

The Cambodian Constituent Assembly was a body elected in 1993 to draft a constitution for Cambodia as provided in the Paris Peace Accord. The writing of the Cambodian Constitution took place between June and September 1993 and it resulted in the transformation of the political situation of Cambodia from civil-war-marred, autocratic oligarchy to a Constitutional Monarchy. Achieved under the guidance, auspices and funding of the United Nations Transitional Authority in Cambodia (UNTAC), the drafting of the constitution was the culmination of a larger, $1.6 billion effort to end the decades-old Cambodian Civil War and bring the warring parties into political, rather than military competition. The result of the process was the creation of a constitution for Cambodia that, at least on paper, guarantees free political competition, regular elections, equal rights and representation and universal suffrage.