The College has produced numerous men and women of the arts that gradually helped shaped Philippine Arts and Architecture.

Victorio Candido Edades was a Filipino painter. He led the revolutionary Thirteen Moderns, who engaged their classical compatriots in heated debate over the nature and function of art. He was named a National Artist in 1976. 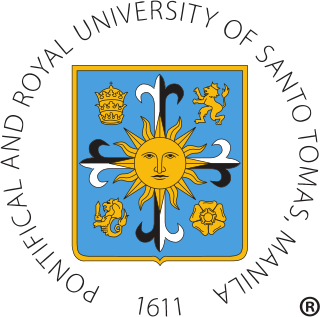 The University of Santo Tomas is a private, Catholic research university in Manila, Philippines. Founded on April 28, 1611, by Spanish friar Miguel de Benavides, Archbishop of Manila, it has the oldest extant university charter in the Philippines and in Asia, and is one of the world's largest Catholic universities in terms of enrollment found on one campus. It is the main campus of the University of Santo Tomas System that is run by the Order of Preachers. 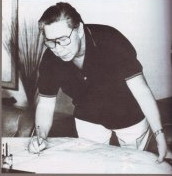 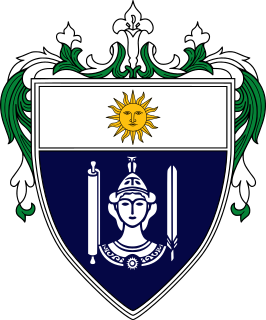 Juan Felipe de Jesús Nakpil, KGCR known as Juan Nakpil, was a Filipino architect, teacher and a community leader. In 1973, he was named one of the National Artists for architecture. He was regarded as the Dean of Filipino Architects.

Mario Parial was a multi-awarded Filipino painter, printmaker, sculptor and photographer. His works have been sold at Sotheby's.

The LKG Tower is an office skyscraper located in Makati, Philippines, and is one of the tallest in the city. Standing at 180.1 metres, the building has 38 floors above ground, and 5 basement levels for parking.

The Shang Grand Tower, also known as simply the Shang Tower, is a high-end residential condominium skyscraper located in Makati, Philippines. It was developed by Shang Properties, Inc.. The 46-storey building was opened in 2006 and rises to 180 metres from the ground to its architectural top. It is currently the 10th-tallest complete building in Makati, and is the 19th-tallest building in the country and Metro Manila as well. The 250-unit condominium was the first self-funded residential condominium of Shangri-La Hotels and Resorts’ Kuok Group in the country, and all units were sold-out as of 2006. 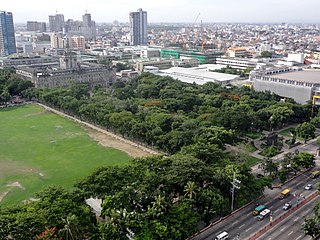 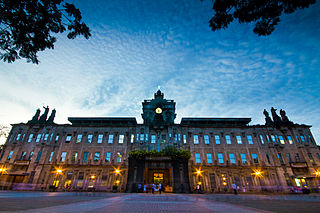 The Pontifical and Royal University of Santo Tomas celebrated its 400th anniversary in 2011. The agenda before the quadricentennial in 2011 included the introduction of new academic programs, improvements in the university's infrastructure, and other projects to raise UST's national and international prominence and promote its role as a social catalyst.

Ernani Joson Cuenco was a Filipino composer, film scorer, musical director, music teacher and Philippine National Artist for Music. He wrote an outstanding and memorable body of works that resonate with the Filipino sense of musicality and which embody an ingenious voice that raises the aesthetic dimensions of contemporary Filipino music. Cuenco played with the Filipino Youth Symphony Orchestra and the Manila Symphony Orchestra from 1960 to 1968, and the Manila Chamber Soloists from 1966 to 1970. He completed a music degree in piano and cello from the University of Santo Tomas where he also taught for decades until his death in 1988. 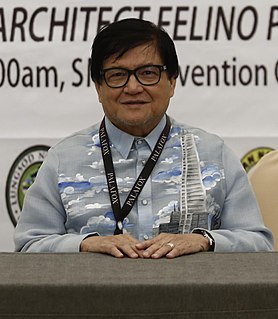 Felino A. Palafox, Jr. is a Filipino architect, urban planner. He is the Principal Architect-Urban Planner and Founder of Palafox Associates. 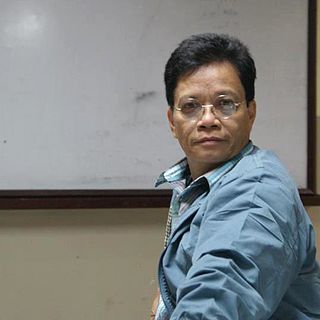 The University of Santo Tomas in Manila, Philippines has 22 colleges and 3 secondary school departments. The colleges are interdependent academic constituents of the university that offer undergraduate and graduate programs. Historically, the colleges are named as Faculty, College, Institute, School, or Conservatory. There are 19 colleges that offer civil courses and 3 faculties that also offer ecclesiastical programs.

Carlos D. Arguelles was a Filipino architect who was known for being a leading proponent of the International Style of architecture in the Philippines in the 1960s. He was an Eagle Scout and a Distinguished Eagle Scout Awardee of the Boy Scouts of America.

Danilo Palomer Santiago is a Full-time Filipino Eclectic painter, professor and Department Chair of University of Santo Tomas - College of Fine Arts and Design (UST-CFAD), Painting Department. His murals are displayed at the Malacaňang Palace, UST Main Building - Faculty of Civil Law and Veterans Memoraila Medical Center and whose works won awards in various art competitions. He was born in Sorsogon, Philippines and now lives in Manila.