Last updated April 02, 2019
A representation of an up-bow mark on a staff
The position of the frog on the bow

An up-bow is a type of stroke used when bowing a musical instrument, most often a string instrument. The player draws the bow upward or to the left across the instrument, moving the point of contact from the bow's tip toward the frog (the end of the bow held by the player). [1]

In music, a bow is a tensioned stick with hair affixed to it that is moved across some part of a musical instrument to cause vibration, which the instrument emits as sound. The vast majority of bows are used with string instruments, such as the violin, although some bows are used with musical saws and other bowed idiophones.

How the up-bow is achieved varies depending on the shape and orientation of the instrument.

String players can exert stronger pressure on the string when bowing near the frog than when bowing near the tip, due to the bowing hand's proximity to the bow's contact point with the string. Up-bows, which begin near the tip, are therefore often used to play the upbeats (weaker beats) within a musical phrase. Notes that begin quietly and crescendo are also ideally up-bowed — from tip to frog — allowing pressure on the string to increase naturally.

The cello ( CHEL-oh; plural cellos or celli) or violoncello ( VY-ə-lən-CHEL-oh; Italian pronunciation: [vjolonˈtʃɛllo]) is a string instrument. It is played by bowing or plucking its four strings, which are usually tuned in perfect fifths an octave lower than the viola: from low to high, C2, G2, D3 and A3. It is the bass member of the violin family, which also includes the violin, viola and the double bass, which doubles the bass line an octave lower than the cello in much of the orchestral repertoire. After the double bass, it is the second-largest and second lowest (in pitch) bowed string instrument in the modern symphony orchestra. The cello is used as a solo instrument, as well as in chamber music ensembles (e.g., string quartet), string orchestras, as a member of the string section of symphony orchestras, most modern Chinese orchestras, and some types of rock bands.

A pull-off is a stringed instrument plucking technique performed by "pulling" the finger off a string off the fingerboard of either a fretted or unfretted instrument.

The erhu, or urheen, is a two-stringed bowed musical instrument, more specifically a spike fiddle, which may also be called a Southern Fiddle, and sometimes known in the Western world as the Chinese violin or a Chinese two-stringed fiddle. 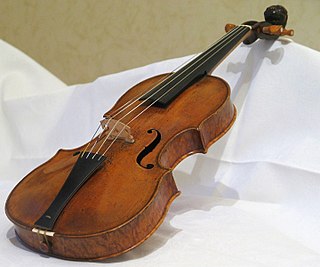 A Baroque violin is a violin set up in the manner of the baroque period of music. The term includes original instruments which have survived unmodified since the Baroque period, as well as later instruments adjusted to the baroque setup, and modern replicas. Baroque violins have become relatively common in recent decades thanks to historically informed performance, with violinists returning to older models of instrument to achieve an authentic sound.

Keyboard expression is the ability of a keyboard musical instrument to respond to change tone or other qualities of the sound in response to velocity, pressure or other variations in how the performer depresses the keys of the musical keyboard. Expression types include:

In music, articulation is the direction or performance technique which affects the transition or continuity on a single note or between multiple notes or sounds. Articulation involves subtle differences within duration, amplitude, meter, and, through techniques such as tremolo and pitch.

Playing the violin entails holding the instrument under the chin, supported by the left shoulder. The strings are sounded either by drawing the bow across them (arco), or by plucking them (pizzicato). The left hand regulates the sounding length of the strings by stopping them against the fingerboard with the fingers, producing different notes.

Martelé, literally "hammered," is a bowstroke, used when playing bowed string instruments, though the Italian martellando and martellato are also applied to piano and vocal technique, and even to the organ. The effect is usually produced by holding the bow against the string with pressure, then releasing it explosively to produce a sharp, biting attack with a rest between strokes. Some violinists use it when playing staccato notes.

The Cretan lyra is a Greek pear-shaped, three-stringed bowed musical instrument, central to the traditional music of Crete and other islands in the Dodecanese and the Aegean Archipelago, in Greece. The Cretan lyra is considered to be the most popular surviving form of the medieval Byzantine lyra, an ancestor of most European bowed instruments.