The upright row is a weight training exercise performed by holding a weight with an overhand grip and lifting it straight up to the collarbone. This is a compound exercise that involves the trapezius, the deltoids and the biceps. The narrower the grip the more the trapezius muscles are exercised, as opposed to the deltoids.

Barbells, dumbbells, kettlebells or a cable machine can be used.

In the 1970s there are examples of this exercise being referred to as pullups. [1] This is no longer common, and this term is now mostly used to refer to the exercise involving pulling the body up to a bar.

Due to the amount of internal rotation of the humerus during this movement, many trainers and organizations (such as the ACSM and NFPT) consider this a contraindicated exercise for all trainees. Most will at least advise those with shoulder impingement issues to avoid it. Abstaining from raising the bar above the chest line will help in avoiding injury or symptoms related to rotator cuff impingement. [2] If pain arises, stop this exercise immediately, as it may be an indicator of a rotator cuff disorder. Substitutes include shoulder shrugs for upper trapezius development and lateral raises for lateral deltoids.

The bench press, or chest press, is an upper-body weight training exercise in which the trainee presses a weight upwards while lying on a weight training bench. The exercise uses the pectoralis major, the anterior deltoids, and the triceps, among other stabilizing muscles. A barbell is generally used to hold the weight, but a pair of dumbbells can also be used.

The term "biceps curl" refers to any of a number of weight training exercises that primarily targets the biceps brachii muscle. It may be performed using a barbell, dumbbell, resistance band, or other equipment. 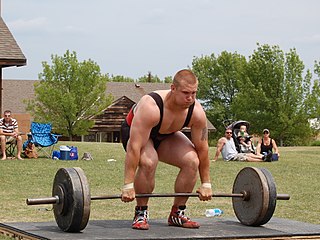 The deadlift is a weight training exercise in which a loaded barbell or bar is lifted off the ground to the level of the hips, torso perpendicular to the floor, before being placed back on the ground. It is one of the three powerlifting exercises, along with the squat and bench press.

The shoulder shrug is an exercise in weight training used to develop the upper trapezius muscle.

The good-morning is a weight training exercise. It is known as a good morning because of the movement in the erector spinae which resembles the bow that traditionally begins a schoolday in some East-Asian countries. The erector spinae muscles of the lower back work isometrically to keep the spine in an extended position while the hamstrings and gluteus maximus work isotonically to perform hip extension. Other muscles are involved in stabilizing weight on the back and maintaining balance.

The clean and press is a two-part weight training exercise whereby a loaded barbell is lifted from the floor to the shoulders and pushed overhead. The lift was a component of the sport of Olympic weightlifting from 1928 to 1972, but was removed due to difficulties in judging proper technique.

A bent-over row is a weight training exercise that targets a variety of back muscles. Which ones are targeted varies on form. The bent over row is often used for both bodybuilding and powerlifting. It is a good exercise for increasing strength and size.

The pull-down exercise is a strength training exercise designed to develop the latissimus dorsi muscle. It performs the functions of downward rotation and depression of the scapulae combined with adduction and extension of the shoulder joint.

The overhead press, also referred to as a shoulder press, military press, or simply the press, is a weight training exercise with many variations. It is typically performed while either standing or sitting sometimes also when squatting, in which a weight is pressed straight upwards from racking position until the arms are locked out overhead, while the legs, lower back and abs maintain balance. The exercise helps build muscular shoulders with bigger arms, and is one of the most difficult compound upper-body exercises.

A fly or flye is a strength training exercise in which the hand and arm move through an arc while the elbow is kept at a constant angle. Flies are used to work the muscles of the upper body. Because these exercises use the arms as levers at their longest possible length, the amount of weight that can be moved is significantly less than equivalent press exercises for the same muscles . Due to this leverage, fly exercises of all types have a large potential to damage the shoulder joint and its associated ligaments and the tendons of the muscles connecting to it. They should be done with caution and their effects first tested while using very light weights; which are gradually incremented after more strength is gained.

The front raise is a weight training exercise. This exercise is an isolation exercise which isolates shoulder flexion. It primarily works the anterior deltoid, with assistance from the serratus anterior, biceps brachii and clavicular portions of the pectoralis major. The front raise is normally carried out in three to five sets during a shoulder workout. Repetitions depend on the lifter's training program and goals.

The rear delt raise, also known as the rear deltoid raise, or rear shoulder raise is an exercise in weight training. This exercise is an isolation exercise that heavily works the posterior deltoid muscle. The movement is primarily limited to the two shoulder joints: the glenohumeral joint and the scapulothoracic joint. Scapular movement will also cause movement in the sternoclavicular joint and acromioclavicular joint. If the elbow bends during the extension exercises, it gravitates into a rowing motion.

Shoulder impingement syndrome is a syndrome involving tendonitis of the rotator cuff muscles as they pass through the subacromial space, the passage beneath the acromion. It is particularly associated with tendonitis of the supraspinatus muscle. This can result in pain, weakness, and loss of movement at the shoulder.

The face pull is a weight training exercise that primarily targets the musculature of the upper back and shoulders, namely the posterior deltoids, trapezius, rhomboids, as well as the infraspinatus and teres minor muscles of the rotator cuff. The face pull is considered an important exercise for shoulder health and stability.