Last updated October 04, 2020
American singer and songwriter for the bands Pylon and Supercluster

Born to a textile worker and a housewife in Atlanta, Georgia, Hay attended elementary and high school in Dacula, Georgia, prior to moving to Athens to attend college. Hay graduated from the University of Georgia art school in 1978. She became the singer for Pylon after being auditioned by Michael Lachowski, Randy Bewley, and Curtis Crowe. A few months later Pylon were the opening band for the British group the Gang of Four in New York City, at the club Hurrah, after being brought to the club's attention by Kate Pierson and Fred Schneider of the B-52's. [1] [2]

Danny Beard, from Atlanta helped Pylon to record their first single "Cool/Dub" in 1979 at Stone Mountain Studios in Atlanta, and Pylon began to tour the US. The album Gyrate followed and was released in late 1980. Early career highlights included a performance at Central Park opening for the B-52's, a tour of the UK, opening a few dates for U2 on their first major US tour and the release of the album Chomp . [3]

Pylon decided to quit while they were still having fun. They broke up for the first time in 1983 after playing a "final" show, which was taped for The Athens Show. This was never formally released. In 1986, Hay was filmed for the movie Athens, GA: Inside Out and spoke about her experiences with Pylon. She and Bob Hay were married in 1986. In 1987 they had their first daughter. [4]

In 1989, Pylon reformed. Career highlights the second time around included tours with both R.E.M. and the B-52's, performances at SXSW and CMJ. Hits , a compilation of their early material was reissued by DB Records in 1989. Pylon recorded their third album Chain for the Atlanta label Sky Records in 1991. Pylon broke up a second time in 1992.They played several more shows including the South by Southwest Festival in 1990 and 1991, but when guitarist Bewley decided to leave in 1991, the band broke up again.

Randy Bewley approached the other band members about reforming Pylon, just for fun, in 2004. In August, 2004 Pylon played an unannounced show at Little Kings in Athens, Georgia. In 2005, they played a series of dates in Athens and Atlanta, including Athfest and at the Atlanta Heroes awards by the invitation of the B-52's. Jason Gross, Perfect Sound Forever encouraged them to look into reissuing their first album, Gyrate, on CD. Jeff Calder (The Swimming Pool Q's) restored the tapes at Southern Tracks Studios in Atlanta and Rodney Mills remastered them at Rodney Mills Masterhouse in Duluth, Georgia. DFA records in New York approached Pylon about reissuing this material, unaware that Pylon were already working toward this. James Murphy of LCD Soundsystem (band), had been including Pylon's song "Danger" in his DJ sets for several years and was interested in re—issuing Pylon's first album Gyrate on his label DFA. Gyrate Plus was reissued on October 16, 2007. [6] A remastered Chomp More was reissued on October 20, 2009. [7]

A 7-inch vinyl single "Gravity / Altitude" by Pylon was issued in April 2016 by Chunklet as a part of the Pylon Live project. A double vinyl album was issued on July 25, 2016. This music was recorded at the first final performance on December 1, 1983 at the Mad Hatter in Athens, GA. [9] Vanessa performed with Pylon Reenactment Society at both release events along with Swimming Pool Q's and members of Love Tractor.

Since 2014, Hay has fronted the Pylon Reenactment Society, a Pylon tribute act featuring members of more recent Athens bands like the Glands and Casper & the Cookies. [10] In a 2016 Portland Mercury interview, Hays said, "It's been inspirational, if that's the right word, to be able to play this music again. I really don't want people to forget Pylon. These are different people and we are re-enacting this experience, so it's not exactly Pylon, but it's fresh and done in the same spirit". In October 2017, Pylon Reenactment Society self-released an EP initially recorded on December 11,2016 for broadcast in Los Angeles, California for DJ Michael Stock's KXLU show "Part Time Punks," called "Part Time Punks Session." In March 2018, Hay was named one of the “25 Best Frontwomen of All Time” by Paste Magazine [11]

Saddle Creek Records is an American record label based in Omaha, Nebraska. Started as a college class project on entrepreneurship, the label was founded by Mike Mogis and Justin Oberst in 1993. Mogis soon turned over his role in the company to Robb Nansel. The label is named after Saddle Creek Road, a street that cuts through the east side of midtown Omaha, and the beginnings of a scene whose members included Justin's brother Conor Oberst, Tim Kasher, and others. Collectively, they were known unofficially as the "Creekers". Saddle Creek first appeared in print on a show flyer, offering to "Spend an evening with Saddle Creek" Saddle Creek became an incorporated entity as a result of a class project on entrepreneurship. Distribution is handled by Redeye Distribution.

Man or Astro-man? is an American surf rock group that formed in Auburn, Alabama in the early 1990s and came to prominence over the following decade. 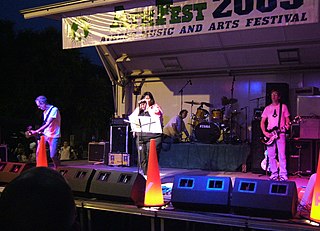 Happy Happy Birthday To Me Records is an American independent record label based in Athens, Georgia. Its catalogue features indie rock, indie pop and hip-hop music, with several of its artists associated with or influenced by The Elephant 6 Recording Company.

Oh-OK was an American musical group from Athens, Georgia, formed in 1981 with singer/lyricist Linda Hopper, bassist/vocalist/lyricist Lynda Stipe, and drummer David Pierce. Other members later included drummer David McNair and guitarist Matthew Sweet. The trio began practicing together at parties in the college community in the spring of 1981. Their first club performance break came when Stipe's brother, Michael Stipe of R.E.M., needed an opening band for a show at the 40 Watt Club.

Harvey Milk is an American experimental rock/noise rock band that formed in Athens, Georgia in the early 1990s. While Harvey Milk invariably draws comparisons to the Melvins, due to their penchant for slow, heavy riffs, the band has touched upon such artists as ZZ Top, Led Zeppelin, Leonard Cohen, and Kiss as influences in their music. They even went so far as to perform a live show consisting of nothing but Hank Williams covers. One April Fool's Day gig at the 40 Watt in Athens, they performed R.E.M.'s Reckoning album from beginning to end, while Michael Stipe was in attendance.

Michael Scott Lachowski was the bass guitar player for Pylon, a band from Athens, Georgia. He was born in Norfolk, Virginia and attended the University of Georgia art school. He and his roommate Randy Bewley formed Pylon, recruiting Curtis Crowe as a drummer, and Vanessa Briscoe Hay, a fellow student at the University of Georgia. They recorded the single "Cool/Dub", an album Gyrate, an EP, another album Chomp, and two singles. Pylon toured the United States, Canada and the United Kingdom before breaking up in 1983. They returned to tour again in 1988, and recorded another album, Chain, in 1990, before breaking up again in 1991. Pylon reformed in 2005 and occasionally performed until 2009, when Bewley died. Their first album, Gyrate Plus, was reissued on October 16, 2007, by DFA Records, New York City. In 2009, Chomp More was also reissued by DFA Records.

Curtis Hudgins Crowe is the drummer for the Athens, Georgia rock band Pylon. He is a native of Marietta, Georgia, and is the middle child of five children. Crowe moved to Athens to attend the University of Georgia art school. His sister Rhett Crowe was later the bass player for the band Guadalcanal Diary, a fixture on the college music scene back in the 1980s and 1990s. He has also been involved in several other music projects such as Strictly American and Dodd Ferrelle and the Tinfoil Stars.

Randall Eugene "Randy" Bewley was the guitarist for the Athens, Georgia band Pylon. Born in Bradenton, Florida, United States. He lived in Sarasota, Florida, Washington, DC and near Atlanta, Georgia while growing up. Bewley attended the University of Georgia art school where he met Michael Lachowski, a fellow art student. They became roommates and decided to form a band. He and Lachowski, along with fellow art students Vanessa Briscoe Hay and Curtis Crowe, formed Pylon, having their first performance in 1979. On their first trip to New York City, they were reviewed in Interview Magazine.

Casper & the Cookies is an American rock and pop band from Athens, Georgia, United States.

Bob Hay born Robert Donald Hay, Jr. on January 28, 1950, is an American songwriter and the multi-instrumentalist and vocalist for Athens, Georgia projects the Squalls, Bob Hay & the Jolly Beggars, Noogeez, A. Che Why and Supercluster.

Hannah M. Jones is an artist and musician from Athens, Georgia. Born in Par, England, during the "Top of the Pops," Hannah grew up in Sandersville, Georgia, and later attended art school at the University of Georgia in Athens, Georgia. Past member of Elephant Six Collective band The Circulatory System, as well as The Instruments, she now focuses her attention on her songwriting project The New Sound of Numbers as a vocalist/12-string guitarist/drummer, and is drummer/vocalist for Supercluster (band) .

Kevin Dunn, born 10 October 1951 in Jacksonville, Florida, is a guitarist, producer, and songwriter who first came to public notice in context of the fertile new wave scene that arose in Athens and Atlanta, GA, in the late 1970s. In 1975 he and collaborator Alfredo Villar formed the Fans, one of the first Southeastern bands for whom the influence of blues or country music was not primary, their chief inspiration lying instead in the British art rock of the era. The band issued three singles — the second of which, "Cars and Explosions", was produced by Mark Miller-Mundy and released on Dai Davies' Albion label — but, destabilized by artistic differences between the principals and disheartened by the failure of a protracted dalliance with A&M Records that had been championed by the label's then-head of A&R John Anthony, they disbanded in 1979. 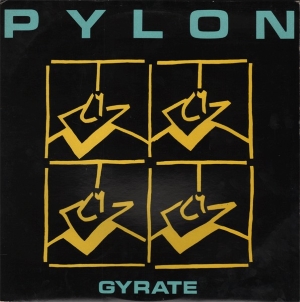 Chomp is the second studio album by Athens, Georgia band Pylon, released in 1983. It was re-released in 2009 via DFA Records.