Last updated September 22, 2022
American metalcore band
This article is about the metalcore band. For other uses, see Veil of Maya (disambiguation).

Veil of Maya is an American metalcore/deathcore band, formed in Chicago, Illinois, by members Marc Okubo and Sam Applebaum in 2004. They are currently signed to Sumerian Records and have released six studio albums. Their first four albums are considered to be deathcore, but their fifth album, Matriarch , is considered to be metalcore. [1] [2] [3] [4] They have also been associated with djent. [1] [3]

After recording a self-released demo in 2005, guitarist Scott Okarma briefly joined the group, participating in local shows and early touring. At this point, Veil of Maya were a six-piece band with three guitarists, but this only lasted for a few months before both Marshall and Okarma left the band. Bryan Ruppell replaced them both on rhythm guitar thus reverting their lineup back to five members.

With this five member line-up, the band recorded, self-produced and released their debut full-length album All Things Set Aside through Corrosive Recordings in 2006. In early 2006 vocalist Clemans and guitarist Ruppell left the group leading Veil of Maya to enlist the help of then 20-year-old Brandon Butler, former vocalist of the Indiana metal band Iscariot. The band also decided not to search for a new rhythm guitarist, thus leaving Veil of Maya as a four-piece.

In January 2008, after heightened exposure from interviews and successful tours, Veil of Maya signed with Sumerian Records. [6] Sumerian manager Shawn Keith and founder Ash Avildsen were both reportedly very ecstatic about the partnership. Veil of Maya's second album, The Common Man's Collapse was recorded with Butler in 2008 and released the same year. Shortly after the album release, the band parted ways their original bassist Kristopher "Kris" Higler in 2009, and was replaced by Matthew Pantelis, formerly of Born of Osiris.

After their second album's release, the following several months held extensive touring before the writing and recording for the group's third full-length, [id] began. [id] was released on April 6, 2010, and reached number 107 on the Billboard 200. [7] The band worked again with producer Michael Keene from The Faceless for this album, who previously produced The Common Man's Collapse. The album's name was derived from the main character of the PlayStation game Xenogears ;[ citation needed ] the album itself also holds several concepts and references to other topics in popular culture, especially television shows. [8] [9]

After the release of [id], Pantelis as well left the band, which led to Danny Hauser replacing him in 2010; the band's current bassist. On January 13, 2012, Sumerian Records released a teaser for Veil of Maya's next album, Eclipse . On January 17, the single "Vicious Circles" was released onto the iTunes Store. Eclipse was then released on February 28, 2012 [10] and was produced and co-written by Periphery guitarist Misha Mansoor. [11]

Veil of Maya announced in 2014 that they had finished writing the follow-up to Eclipse and were recording with Taylor Larson. However, progress was stopped as long-time vocalist Brandon Butler left the band, citing creative differences with his bandmates. [13] [14] Butler moved on to join a band named Lost Origins, which features former members of I Declare War. [15]

At Knotfest 2014, Veil of Maya were seen performing with a new vocalist, who is well known in the local music scene of the state of Wisconsin, on January 1, 2015 it was announced that Arms of Empire vocalist Lukas Magyar joined the band replacing the departed Butler. [16] At the same time, the band released a new single, "Phoenix". [17]

Shortly after the announcement, the band headed out on the "Slow Your Troll and Know Your Role" tour with Upon a Burning Body, Volumes, Gideon and The Last Ten Seconds of Life. They also took part in the Ashes to Ashes European Tour with Chelsea Grin, Oceans Ate Alaska and Black Tongue (Black Tongue pulled out within the first few shows due to an injury sustained by frontman Alex Teyen). [18]

On March 23, 2015, Veil of Maya officially announced the release of a new album, Matriarch, and released a new single, "Mikasa". The album was released on May 12, 2015 through Sumerian Records. [19] It is the band's first release with Magyar, and represents somewhat of a departure from the style of the band's previous releases: it is less focused on technicality and is their first work to incorporate clean singing and replaces growling with hardcore-style screaming.

On September 13, 2017, the band released a music video "Overthrow" on YouTube, and announced the album False Idol for October 20, 2017. The music video for the band's second single "Doublespeak" was added to YouTube on October 3, 2017.

On September 12, 2019, they released the single "Members Only" off a future unknown album. On May 3, 2020, the band released a music video for the single "Outsider" and an animated music video for their single “Viscera” on February 27, 2021, from the presumed unannounced album. On October 6, 2021, their single "Outrun" was uploaded to YouTube as a music video. On April 20, 2022, the band released a new single, "Synthwave Vegan".

Impending Doom is an American Christian deathcore band from Riverside, California. The group has released six full-length studio albums and are currently a five piece with lead vocalist Brook Reeves as one of the two original remaining members along with Manny Contreras who left the band in 2010 but returned in 2012. The band refers to their style of music as "gorship" - a portmanteau of the words gore and worship. 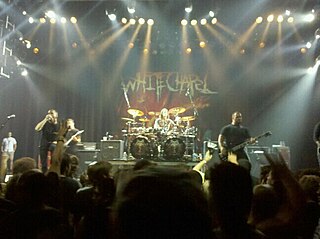 Whitechapel is an American deathcore band from Knoxville, Tennessee. The band is named after the Whitechapel district in East London, England, where Jack the Ripper committed a series of murders. The group comprises vocalist Phil Bozeman, guitarists Ben Savage, Alex Wade, and Zach Householder and bassist Gabe Crisp. Founded in 2006 by Bozeman and Savage, the band has released eight studio albums and fourteen music videos, and are currently signed to Metal Blade Records. Whitechapel's 2010 album A New Era of Corruption, sold around 10,600 copies in the United States in its first week of release and debuted at position No. 43 on the Billboard 200 chart. The band's self-titled fourth album was released in 2012 and debuted at No. 47 on the Billboard 200, selling roughly 9,200 copies in its first week. In 2014 the band released their fifth full-length album, Our Endless War to generally positive reviews. The album sold roughly 16,000 copies in its first week and debuted at No. 10 on the Billboard 200. They released their sixth full-length album Mark of the Blade in 2016 to greater critical acclaim, selling roughly 8,000 copies in the first week of its release. In 2019, Whitechapel released their seventh album, The Valley, which debuted at No. 143 on the Billboard 200 also to critical acclaim. Their newest album, Kin, was released on October 29, 2021.

Born of Osiris is an American progressive metalcore band formed in 2003 in Palatine, Illinois, a suburb of Chicago. The band currently consists of lead vocalist Ronnie Canizaro, lead guitarist Lee McKinney, rhythm guitarist/bassist Nick Rossi, drummer Cameron Losch, and keyboardist/vocalist Joe Buras. Born of Osiris has played at various festivals including the Summer Slaughter Tour and the Music as a Weapon Tour 4. 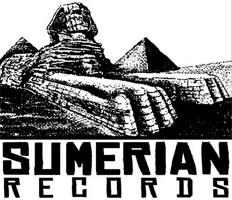 Sumerian Records is an American independent record label based in Los Angeles, Washington D.C., and London. The label was founded in 2006 by Ash Avildsen. They have signed artists such as Black Veil Brides, Poppy, Bad Omens, Palaye Royale, and The Smashing Pumpkins. It is considered a true lifestyle modern music brand known for both breaking new artists and revitalizing iconic legacy acts. In early 2022, Sumerian acquired Behemoth Entertainment, a comic book and video game publisher, in order to increase their merchandise options and further expand the brand. 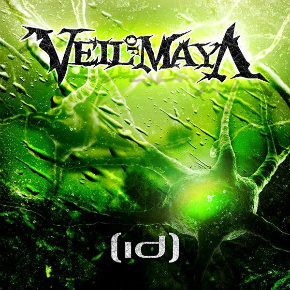 [id] is the third studio album by American deathcore band Veil of Maya. It was released through Sumerian Records on April 6, 2010. They worked with producer Michael Keene of death metal band The Faceless on this album. Keene previously worked with the band, producing their previous album The Common Man's Collapse. It is the band's only album to feature bassist Matthew C. Pantelis.

After the Burial is an American progressive metal band from Minneapolis, Minnesota. They are currently signed to Sumerian Records and have released five of their six full-length albums through the label. Since their inception in 2004, the band has gone through two vocalist changes, two drummer changes, the departure and death of founding rhythm guitarist Justin Lowe, and the departure of bassist Lerichard Foral. Lead guitarist Trent Hafdahl remains the sole remaining founding member. They are considered key contributors to the development of subgenres such as djent and progressive metalcore.

Betraying the Martyrs are a French metalcore band from Paris. 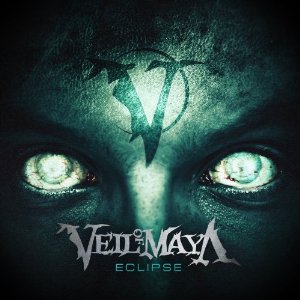 Eclipse is the fourth studio album by American deathcore band Veil of Maya. It was released on February 28, 2012 and is the band's shortest album to date, clocking in at only 28 minutes. Eclipse was co-written and produced by Misha "Bulb" Mansoor, who is the guitarist of the Maryland-based metal band Periphery. It is the first record by the band to feature bassist Danny Hauser and the last with vocalist Brandon Butler. 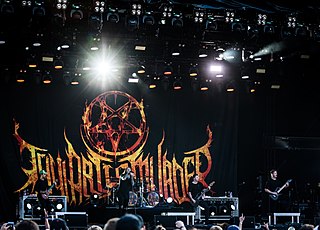 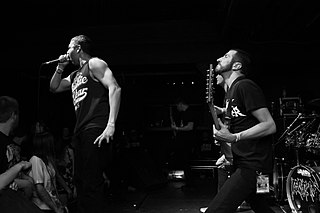 Erra is an American progressive metalcore band from Birmingham, Alabama, formed in 2009. The band was named after the homonymous Akkadian god of war and plague. The band has released five studio albums and three EPs to date. Their latest album, titled Erra, was released on March 19, 2021. They have toured with bands such as As I Lay Dying, August Burns Red, TesseracT, Born of Osiris, Ice Nine Kills, Glass Cloud, Within the Ruins and Texas in July. 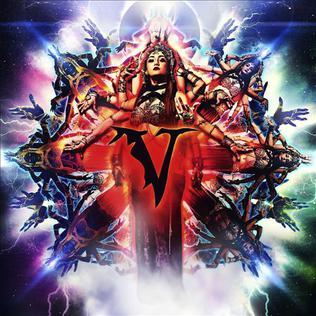 Matriarch is the fifth studio album by Veil of Maya. It is the band's first album with vocalist Lukas Magyar. The album was produced, mixed and mastered by Taylor Larson of From First to Last.

False Idol is the sixth studio album by American metalcore band Veil of Maya, released on October 20, 2017 through Sumerian Records. The instrumental parts of the album were produced by Max Schad, while vocal parts were produced by Brandon Paddock.

Structures is a Canadian metalcore band from Toronto, formed in 2009. Their current line-up consists of guitarists Spyros Georgiou and Brendon Padjasek, who also performs vocals, and drummer Andrew McEnaney. They have released two studio albums: Divided By (2011) and Life Through a Window (2014).

Divided By is the debut studio album by Canadian metalcore band Structures, released on October 24, 2011, by Sumerian Records. It was produced by Will Putney and recorded at the Machine Shop in Belleville. It was the only album to feature vocalist Nick Xourafas and bassist Spencer MacLean.