Vodafone Czech Republic a.s. is a Czech telecommunications company. It is among the largest Czech companies by revenue. It was established as Český Mobil (Czech Mobile) in 1999, when the government of Miloš Zeman granted it a free license to operate the third mobile GSM network. Its mobile network was called Oskar; the company itself was renamed in September 2004 to Oskar Mobil. [1] In 2005 the international company Vodafone became the sole shareholder, [2] which in November 2005, approved the most recent change in the company name. Czech Vodafone currently has over 3 million customers. [3] The director is Petr Dvořák since February 2018.

In September 1999, an evaluation of the tender for the third license to operate telecommunications services in the GSM 1800 MHz band was conducted. Of the four registered bidders (Český Mobil, Orange, CrysTel, Vlna+) the best to meet the requirements of the tender were Český Mobil (148 points out of 150 possible) and Orange (132 points out of 150). [4] When comparing the experience with the operation of networks in the 1800 MHz (100% versus 0%) and the number of users (3.5 million versus 456 thousand), Orange prevailed, while Canadian Telesystems International Wireless (TIW, the majority shareholder of Český Mobil) [5] had the difference from its rival having operated a mobile network in Romania (i.e. had experience with the operation of the network in an Eastern European country) and offered its network three months from the completion of the tender, i.e. during the scheduled completion of the tender at the end of September 1999, it should be running a network by Český Mobil by the end of December 1999. Orange offered to launch its network in early March 2000. The tender was won by Český Mobil. On October 8, 1999, Český Mobil had its contract. It included a clause to run the network within three months: [6] Český Mobil agrees to commence the provision of mobile telecommunications services and operation of telecommunications equipment within 3 months from the granting of credentials to cover approximately 37% of the population, assuming the availability of technical interconnection with SPT TELECOM, a.s. The original plan was to launch the network by Christmas 1999, but was dismissed from the mouth of the company's spokesperson about two months after signing the contract (November 1999) [7] that the network would be operational by the deadline specified in the contract with the Ministry of Transport and Communications - the 8th of January 2000, but only for pilot testing. [8] Officially, the commercial operation of the network Oskar wasn't started until March 1, 2000. [6] [9]

In 2001, in cooperation with Ericsson and the Czech Technical University it opened a Research and Development Center. [10] Between 2001 and 2002, Oskar won 5 nominations for the prestigious World Communication Award for the best mobile operator. [3] It closed its partnership with the world's mobile Vodafone family in 2005 [2] and a year later of Oskar Mobil a.s. became Vodafone Czech Republic a.s. Within a few months, there was a complete rebranding and Oskar Vodafone later became Vodafone. In 2007, Vodafone OneNet was launched offering companies converged mobile and fixed voice and data services including Internet access. As the first operator to do so, it started to offer services for free in exchange for viewing the ad on your mobile phone. In the following years they began the construction of a 3G network and at the end of 2012 already covered 73.2% of the population. In the same year, Vodafone was the first operator to bring per-second billing and the first tablet under its own brand. The year 2013 was marked by unlimited tariffs, the test LTE network and cooperation with virtual operators. [3]

Commercial operation of the network was launched in March 2000. [6] [9] The Vodafone network currently covers 99.1% of the population. [3] With the launch of EDGE, Vodafone introduced unlimited data services in 2005. The operation of its 3G network was launched in 2009. It launched LTE 4 years later for the first time. Vodafone is different from other operators in that they want LTE networks to cover mainly rural areas. By the end of 2014, it plans to cover 93% of the population. [11]

Virtual operators in the Vodafone network

On December 2, 2013 Vodafone launched its own virtual operator Oskarta, [12] whose name follows its earlier service. It is a prepaid card that is already characterized by cheap calls. The Vodafone network currently comprises 23 virtual operators. Among them include: Centropol Telecom, COOP Mobil, DH Telecom, LAMA Mobile, Oskarta, Quadruple, SazkaMobil, Studentfone. [13]

Vodafone is environmentally friendly and the first operator to launch a so-called Green network. [14] More than two-thirds of its telecommunications network is supplied from renewable sources (hydropower, biogas plants, combustion of biomass, wind, solar) and the remaining 30% of energy consumption annually relies on 20,000 trees being planted in cooperation with the Agency for Nature Conservation and Landscape. According to a number of different parameters (material production, transportation, energy consumption) Vodafone is granted the environmental assessment Eco-class. [15] The Vodafone Foundation, a non-profit organization since its founding in 2006, has distributed more than 125 million CZK. [16] It supports young people in particular and all others who use their energy and creativity for the benefit of the community and society. Within the accelerator program Laboratory, the Vodafone Foundation helps implement ideas and projects, providing grants, regular meetings and mentoring and its successful graduates even have the opportunity to go abroad. [17]

Eircom Limited, trading as eir, is a large fixed, mobile and broadband telecommunications company in Ireland. The now privatised company, which is currently incorporated in Jersey, traces its origins to Ireland's former state-owned monopoly telecommunication provider Telecom Éireann and its predecessors, P&T and before the foundation of the state, the telecommunications division of the GPO. It remains the largest telecommunications operator in the Ireland and has overseas operations focused on the business and corporate telecom markets in the United Kingdom. The company was in majority state ownership until 1999, when it was privatised through a floatation on the Irish and New York Stock Exchanges.

Proximus is the largest of Belgium's three mobile telecommunications companies and is a part of Proximus Group. It competes with Orange Belgium and Telenet.

Vodafone New Zealand is a New Zealand telecommunications company. It was a subsidiary of the London-listed company Vodafone Plc. On 31 July 2019, the sale of Vodafone New Zealand Limited to a consortium comprising Infratil Limited and Brookfield Asset Management Inc. was settled. Vodafone is based in Auckland and was formed in 1998, after Vodafone purchased BellSouth's New Zealand operations. The company employs over 3,000 people and has operations nationwide, with its main offices based in Auckland, Wellington and Christchurch. The company is part of New Zealand Telecommunications Forum. Vodafone is the largest wireless carrier in New Zealand, with 2.5 million subscribers as of July 2019.

BSNL Mobile is an Indian mobile network operator, operated by the public enterprise BSNL. It provides both pre-paid and post-paid mobile services as well as many value added services. BSNL Mobile has a pan-India presence with presence in all the 22 telecom circles in India. BSNL Mobile provides all of India services with roaming access, including Delhi and Mumbai, and International roaming access to more than 300 networks across the world.

Telesystem International Wireless (TIW) was a Canadian-based fast-growing, global mobile communications operator. The company's shares were listed on the Montreal Exchange and the Toronto Stock Exchange ("TIW") and NASDAQ ("TIWI").

Internet in the Czech Republic and Internet access are largely provided by the private sector and is available in a variety of forms, using a variety of technologies, at a wide range of speeds and costs. In 2013, 68% of Czechs were connected to the Internet.

Vodafone Hungary, is the second largest mobile operator in Hungary. It started operations in 1999 after securing the third GSM 900/1800 MHz licence of the country and it was the first provider operating in the DCS-1800 band in Hungary. Vodafone is the second-largest mobile network operator of the country. The operator had a share of 22.84% of the market in June 2012. They controlled approx. 27% of the market in December of 2019. Market share The full report about the number of subscribers is available at: link *2020 --> Full Year --> Spreadsheet --> Regional results

touch is one of the two mobile telephony and data operators in Lebanon, alongside its rival Alfa. It is owned by the Lebanese government, and was until May 2020 operated by the Zain Group.

Max Telecom was a mobile telecommunications company and internet service provider (ISP) in Bulgaria. It was launched in October 2007 by Krasimir Stoychev, the founder of Bulgaria's first GSM operator MobilTel, as Max Telecom. Max Telecom has license for operating the telecommunication services through a network of "point-to-multipoint" with national coverage, the service is also known as WiMAX. This type of network allows the building of high-speed and reliable connection. Also it gives opportunity to offer a wide range of fixed and mobile services, including Internet access, virtual private networks (VPN), voice services, video services and IPTV. The company is the first to launch commercial LTE network in Bulgaria. In May the company rebranded with new logo and began promoting itself simply as "Max".

Karla Stephens-Tolstoy is the co-founder and CEO of Stand Up Speak Up Apparel and the former CEO of Vodafone Czech Republic.

Oskar Mobil a.s. was a telecommunications company in the Czech Republic between 1999 and 2005. The company was purchased by Vodafone in 2005 and changed its name to Vodafone Czech Republic a.s. 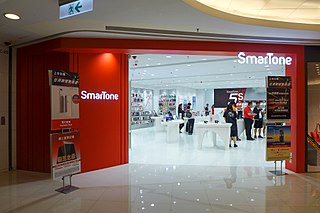 Vodafone Idea Limited d/b/a Vi is an Indian telecom operator with its headquarters based in Mumbai and Gandhinagar. It is a pan-India integrated GSM operator offering 2G, 4G, 4G+,VoLTE, and VoWiFi services.

One Telecommunications is a telecommunications company that operates in Albania, previously as Albanian Mobile Communications (AMC), and as Telekom Albania. AMC was part of the COSMOTE Group from 2000, and in 2008 joined the Deutsche Telekom group. The display name: One al, Telekom.al or AMC(for older phones).