West Yorkshire covers an area of approximately 800 square miles (2,100 km2) which includes remote moorland, rural villages, large towns, cities, busy motorways and 'A' roads, as well as Leeds Bradford International Airport. [2] The fire and rescue service's headquarters are located in Birkenshaw, Bradford. [3] There is also a large training centre at Birkenshaw used by other authorities besides West Yorkshire.

In 2006, the service was listed as being the fourth largest in England (behind London, the West Midlands and Greater Manchester fire services) with 1,600 wholetime firefighters and 199 retained. [4] It has 47 pumping appliances based at 40 stations, sub-divided into five districts: Bradford, Calderdale, Kirklees, Leeds and Wakefield. [5] [6]

The service's headquarters is at Oakroyd Hall in Birkenshaw; the hall is a grade II listed building that has housed the headquarters since 1964, when it was the headquarters for the West Riding Fire Service (WRFS). [9] [10] Previous to that, the WRFS headquarters was at Huddersfield, [11] though its training centre had moved to Birkenshaw in 1961. [12]

After a number of firefighter deaths at notable fires in the 1990s (Gillender street in Bow, East London [1991] and the Sun Valley poultry factory fire in Hereford [1993]), coupled with the publishing of the Fennell Report into the King's Cross fire of 1987, WYFRS developed an incident command policy that encompassed an at-incident dynamic risk assessment and an organisational structure assessment for major fires. This policy was driven forward by central government and after some refinement was adopted in 1999. [13]

In April 2014, the service's emergency call response centre was moved from the Birkenshaw site to a location in Leeds, which also subsequently became the call centre for the South Yorkshire Fire and Rescue Service (SYFRS), in the event of a control room failure at SYFRS control in Sheffield. [14]

In 2018/2019, every fire and rescue service in England and Wales was subjected to a statutory inspection by His Majesty's Inspectorate of Constabulary and Fire & Rescue Services (HIMCFRS). The inspection investigated how well the service performs in each of three areas. On a scale of outstanding, good, requires improvement and inadequate, West Yorkshire Fire and Rescue Service was rated as follows: [15]

The number of fire stations has changed in recent years as stations are closed, merged, or new ones opened.

Stanningley fire station was opened in February 2003 to replace the two closed stations at Bramley and Pudsey. [18]

WYFRS planned to merge Moortown and Cookridge fire stations on one site. Outline permission to redevelop the site for housing was approved in June 2017. [23] [24]

Keighley fire station is due to be demolished and a completely new structure will be built on the site. £2.2 million was set aside for the project in 2019, however, the Covid pandemic halted works on the site. [25]

The Wholetime Duty System (WDS) is when a fire station is staffed 24/7, and involves four watches of firefighters who work two day shifts from 08:00 to 19:00, two night shifts from 19:00 to 08:00, and then take the following four complete days off.

The Day Crewing System (DCS) is where firefighters respond from the fire station during the day from 08:00 to 17:00, and become on-call retained firefighters outside of these hours. Stations operate on either a four days on/then four days off, or a two days on/two days off/three days on basis.

The Day-Crewed Close-Call System (DC/CCS) is where firefighters respond from the station on a two days on/two days off/three days on basis between the hours of 08:00 and 17:00, and then respond from on-site accommodation out of hours. The close call system is where the firefighters work a set number of hours annually, so the shift patterns are managed locally. Ranks of station manager and above can work a Flexible Duty System, with the remainder of the staff being on a retained basis. [26]

In recent years the service has sought to rationalise its stations. In 2013, Marsden fire station was closed, while in 2015 Gipton and Stanks fire stations in East Leeds were replaced with a single fire station between the two sites at Killingbeck. [27] Of the eight firefighters based at Marsden, three left the service, whilst five transferred to the retained station at Slaithwaite. The fire appliance from Marsden was moved as a cover fire engine at Huddersfield. [28] Haworth fire station, which was staffed by retained firefighters, was closed permanently in 2014. [29]

In the same year, Batley and Dewsbury's fire stations were merged into a single site in Dewsbury and Brighouse and Elland fire stations were also amalgamated into one fire station in Rastrick that is nearer to the M62 motorway. [30] the stations at Otley and Rawdon were due to be closed and replaced with a combined site located in the Menston area, but these plans were abandoned after a suitable site could not be found. [31] [32]

West Yorkshire is a metropolitan and ceremonial county in England. It is an inland and, in relative terms, upland county having eastward-draining valleys while taking in the moors of the Pennines. West Yorkshire came into existence as a metropolitan county in 1974 after the passage of the Local Government Act 1972 and has a population of 2.3 million. Its largest settlements are Leeds, Bradford, Huddersfield, Wakefield, Halifax, Keighley and Dewsbury.

Kirklees is a local government district of West Yorkshire, England, governed by Kirklees Council with the status of a metropolitan borough. The largest town and administrative centre of Kirklees is Huddersfield, and the district also includes Batley, Birstall, Cleckheaton, Denby Dale, Dewsbury, Heckmondwike, Holmfirth, Kirkburton, Marsden, Meltham, Mirfield and Slaithwaite. Kirklees had a population of 422,500 in 2011; it is also the third largest metropolitan district in England by area size, behind Doncaster and Leeds. 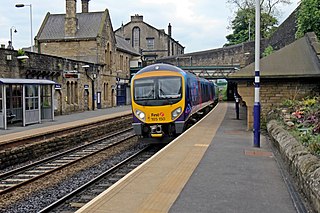 The Huddersfield line is the main railway line between the English cities of Leeds and Manchester via Huddersfield. It is one of the busiest MetroTrain lines. The route travels south-south west from Leeds through Dewsbury. After a short westward stretch through Mirfield, it continues south west through Huddersfield, using the Colne Valley to its headwaters. The long Standedge Tunnel just after Marsden crosses under the watershed and the majority of the run down to Manchester is in the Tame valley. From Manchester, some services continue to Manchester Airport and others to Liverpool. 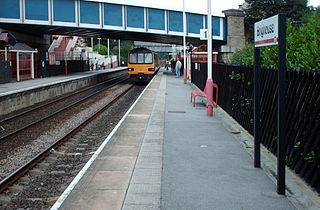 Brighouse railway station serves the town of Brighouse in West Yorkshire, England. The station lies on the Calder Valley line running west from Leeds. Opened in 1840, and closed in 1970, it reopened in 2000 and is served by Northern Trains, Transpennine and Grand Central services.

Birkenshaw is a village in the borough of Kirklees in the county of West Yorkshire, England. It lies at the crossroads between the A58 Leeds to Halifax road and the A651 Bradford to Heckmondwike road. At the 2011 census, the village was located in the ward of Birstall and Birkenshaw, which had a population 16,298. The name of the village derives from Old English and means "Birch Wood". Birkenshaw forms part of the Heavy Woollen District.

Bedfordshire Fire and Rescue Service is the fire and rescue service for the ceremonial county of Bedfordshire in England, consisting of the unitary authorities of Bedford, Central Bedfordshire, and Luton.

The Hereford and Worcester Fire and Rescue Service (HWFRS) is the statutory fire and rescue service covering Herefordshire and Worcestershire in the West Midlands region of England. The service covers an area of 1,514 square miles (3,920 km2), and a population of around 780,000 people.

North Yorkshire Fire and Rescue Service is the statutory fire and rescue service covering the seven districts of administrative county of North Yorkshire: Craven, Harrogate, Hambleton, Richmondshire, Ryedale, Scarborough, Selby; as well as the unitary authority of City of York. The service covers an area of 3,209 square miles (8,310 km2) and serves a population of 830,000. It is divided into eight groups related to the above districts.

South Yorkshire Fire and Rescue is the statutory fire and rescue service for the area of South Yorkshire, England. The service covers the areas of Barnsley, Doncaster, Rotherham and Sheffield. In 2020, Alex Johnson was appointed its Chief Fire Officer.

Humberside Fire and Rescue Service (HFRS) is the statutory fire and rescue service covering the area of what was the county of Humberside (1974–1996), but now consists of the unitary authorities of East Riding of Yorkshire, Kingston upon Hull, North Lincolnshire and North East Lincolnshire in northern England.

Cleveland Fire Brigade is the statutory fire and rescue service covering the boroughs of Hartlepool, Middlesbrough, Redcar and Cleveland & Stockton-on-Tees in the North East of England. The name originates from the former county of Cleveland which was abolished in 1996. The brigade’s area is split between the ceremonial counties of County Durham and North Yorkshire.

FreeCityBus or FreeTownBus is a family of zero-fare bus services which are operated in the centres of several cities and towns in the English county of West Yorkshire. The services operate as FreeCityBus in the city of Wakefield and as FreeTownBus in the towns of Huddersfield and Dewsbury. The service is run under contract to West Yorkshire Metro. FreeCityBus had also operated in Leeds between 2006 and 2011 before being replaced by LeedsCityBus in April 2011 then joining onto route 5 in 2016 and in Bradford before being replaced by Bradford City Bus in 2016. 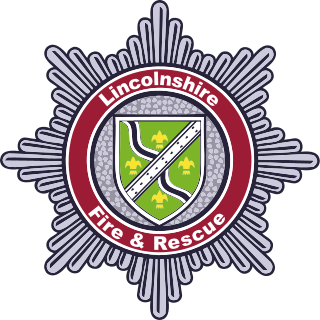 Staffordshire Fire and Rescue Service is the statutory fire and rescue service responsible for fire protection, prevention, intervention and emergency rescue in the county of Staffordshire and unitary authority of Stoke-on-Trent. The county has a population of 1,126,200 and covers a total area of 2,260 km2. Staffordshire shares the majority of its border with Derbyshire, Cheshire, West Midlands (County) and Shropshire; although, in much shorter stretches, the county also butts up against Worcestershire, Warwickshire and Leicestershire.

The Low Moor Explosion was a fire and a series of explosions at a munitions factory in Low Moor, Bradford, West Riding of Yorkshire in August 1916. The factory was manufacturing picric acid to be used as an explosive for the First World War effort and was well alight when the Bradford Fire Brigade arrived. A massive explosion and a series of smaller ones killed 40 people including on-site workers, a railwayman and six firemen who had attended the fire from the Odsal and Nelson Street fire stations.

Wikimedia Commons has media related to West Yorkshire Fire and Rescue Service .
This page is based on this Wikipedia article
Text is available under the CC BY-SA 4.0 license; additional terms may apply.
Images, videos and audio are available under their respective licenses.