William Beckford (baptised 19 December 1709 – 21 June 1770) was a well-known political figure in 18th-century London, who twice held the office of Lord Mayor of London (1762 and 1769). His vast wealth came largely from his plantations in Jamaica and the large numbers of enslaved Africans working for him. He was, and is, often referred to as Alderman Beckford to distinguish him from his son William Thomas Beckford, author and art collector, and from his nephew William Beckford of Somerley (1744–1799), author and planter. During his life, Beckford and his family owned 13 sugar plantations, over 22,000 acres of land, and about 3,000 enslaved Africans. [1]

In 1709, William was born in the colony of Jamaica, the son of Peter Beckford, Speaker of the House of Assembly there, and the grandson of Colonel Peter Beckford, sometime Governor of the colony. He was sent to England by his family in 1723 to be educated. He studied at Westminster School, and made his career in the City of London. [2]

Between 1736 and 1744, William Beckford travelled back and forth between Jamaica and England, serving in the Jamaican militia, and as an elected representative of the island's Assembly. [3]

Beckford's grandfather was Governor of Jamaica, and reputedly owned 20 Jamaican estates, 1200 slaves and left £1,500,000 in bank stock when he died in 1710. He left the vast majority of this wealth to his son Peter Beckford. [4] When Peter Beckford (junior) died in 1735, the young William Beckford inherited his vast estate, as the sole surviving legitimate son. [5]

William Beckford was one of 13 children, but inherited the sole interest in 13 sugar plantations in Jamaica and owned approximately 3,000 enslaved Africans because his older brother, another Peter Beckford, died in 1712. [4] He also served in the Jamaican National Assembly before returning to England in 1744. [6]

In 1760, slaves rose up in revolt on his estate at Esher, in Saint Mary Parish, Jamaica, and they joined Tacky's War, which embroiled the Colony of Jamaica in a series of rebellions throughout the decade. [7]

In 1744 Beckford bought an estate at Fonthill Gifford, near Salisbury, Wiltshire. He made substantial improvements to the property but it was largely destroyed by fire in 1755. "I have an odd fifty thousand pounds in a drawer: I will build it up again," Beckford promptly declared, and rebuilt it as Fonthill Splendens. [8]

On 8 June 1756, aged 47, he married Maria Marsh, daughter of the Hon. George Hamilton. His only child by this marriage was William Thomas Beckford, born at Fonthill Splendens in 1760. Beckford also had eight children born out of wedlock who were left legacies in his will.[ citation needed ]

From 1751 until his death, his London residence was at 22 Soho Square, which became the centre of his political activities.

He became an alderman in 1752, a Sheriff of London in 1756 and was then elected Lord Mayor of London first in 1762 and again in 1769. He was returned as Member of Parliament (MP) for the City of London in 1754. As a rich patron, he used his 'interest' in favour of William Pitt the Elder, sponsoring and encouraging his political rise, supporting the Whig cause in general and the West Indies sugar industry (from which his fortune came) in particular. [9]

In September 1758 he wrote to Pitt advising him on the advisability of attacking the French colony of Martinique:

[Martinique] has but one town of strength (...); all the inhabitants (...) have not victuals to support themselves and numerous slaves for one month, without a foreign supply. The Negroes and stock of the island are worth above four million sterling and the conquest easy (...) For God's sake attempt the capture without delay. [10]

Although some laughed at his faulty Latin, his wealth, social position and power obliged people to respect him. He hosted sumptuous feasts, one of which cost £10,000. On one occasion six dukes, two marquises, twenty-three earls, four Viscounts, and fourteen barons from the House of Lords joined members of the House of Commons in a procession to honour him, followed by one of these banquets. He also drew some popular support due to his promotion of political liberalism, in opposition to the party of the 'King's Friends'.

In March 1770 following the release of John Wilkes, of whom Beckford had been an ardent supporter, Beckford decorated his house with a large banner, which according to Horace Walpole bore the word Liberty written in 3-foot-high (0.91 m) embroidered white letters. A few weeks later, on 23 May, Beckford publicly admonished George III. Breaking contemporary protocol he asked the King to dissolve Parliament and to remove his civil councillors, referring to "our happy constitution as it was established in the Glorious and Necessary Revolution". [11] King George was reportedly more enraged by the breach of protocol than by the nature of the request, yet it attracted the support of the Common Councilmen of London who expressed their gratitude by erecting a monument in the Guildhall, London including a life-size statue of Beckford (pictured), surmounting a stone tablet on which the words Beckford had used to admonish the king are engraved in gold.

In 1929, the London County Council renamed a school in Broomsleigh Street, West Hampstead as Beckford Primary School. In 2020, as part of the Black Lives Matter movement, the London Borough of Camden announced they would rename the school. Possible new names included Beryl Gilroy, after the school's first black headteacher. [12] However, as of September 2021, the new name is West Hampstead Primary School. [13] 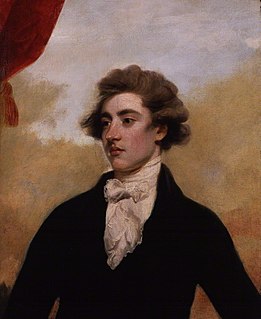 William Thomas Beckford was an English novelist; an art collector and patron of works of decorative art, a critic, travel writer, plantation owner and sometime politician, reputed at one stage to be the richest commoner in England. The son of William Beckford and Maria Hamilton, daughter of the Hon. George Hamilton, he served as a Member of Parliament for Wells in 1784–1790 and Hindon in 1790–1795 and 1806–1820. He is remembered as author of the Gothic novel Vathek (1786), builder of the lost Fonthill Abbey in Wiltshire and of Lansdown Tower in Bath, and above all for his art collection. 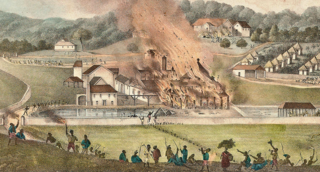 The Baptist War, also known as the Sam Sharpe Rebellion, the Christmas Rebellion, the Christmas Uprising and the Great Jamaican Slave Revolt of 1831–32, was an eleven-day rebellion that started on 25 December 1831 and involved up to 60,000 of the 300,000 slaves in the Colony of Jamaica. The uprising was led by a black Baptist deacon, Samuel Sharpe and waged largely by his followers.

Accompong is a historical Maroon village located in the hills of St. Elizabeth Parish on the island of Jamaica. It is located in Cockpit Country, where Jamaican Maroons and indigenous Taíno established a fortified stronghold in the hilly terrain in the 17th century. They defended it and maintained independence from the Spanish and then later against British forces, after the colony changed hands.

Westmoreland is the westernmost parish in Jamaica, located on the south side of the island. It is situated south of Hanover, southwest of Saint James, and northwest of Saint Elizabeth, in the county of Cornwall. The chief town and capital is Savanna-la-Mar. Negril, a famous tourist destination, is also situated in the parish.

Thomas Thistlewood was a British-born planter in colonial Jamaica. Thistlewood migrated to the western end of the Colony of Jamaica where he became a plantation overseer, plantation owner and slaver. His lengthy and detailed diary is an important historical document chronicling the history of Jamaica and slavery there during the 18th century. The diary includes a detailed account of the brutal treatments of his slaves, including his torture and rape of enslaved women. Thistlewood routinely punished his slaves with fierce floggings and other cruel and gruesome punishments.

Tacky's War, or Tacky's Rebellion, was an uprising of Akan slaves and other Akan tribes including Ashanti, Fanti, Nzema and Akyem. These uprisings occurred in the Colony of Jamaica in the 1760s, and were led by a Fanti royal and warlord called Tacky (Takyi) in eastern Jamaica, and Dahomean war chief or coastal headman Apongo in the western end of the island. 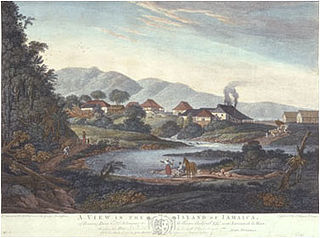 William Beckford of Somerley was an English-West Indian slave-owner in Jamaica, and an author of works on Jamaican topography and conditions in slavery, and ancient French history. Isaac Royall Jr. (1719–1781) was a colonial American landowner and slave-owner who played an important role in the creation of Harvard Law School.

Jamaican Maroons descend from maroons, Africans who escaped from slavery on the Colony of Jamaica and established communities of Free black people in Jamaica in the mountainous interior, primarily in the eastern parishes. Escaped Africans who were enslaved during Spanish rule over Jamaica (1493–1656) may have been the first to develop such refugee communities.

Vincent Brown is Charles Warren Professor of History, Professor of African and African-American Studies, and Director of the History Design Studio at Harvard University. His research, writing, teaching, and other creative endeavors are focused on the political dimensions of cultural practice in the African Diaspora, with a particular emphasis on the early modern Atlantic world.

Coromantee, Coromantins, Coromanti or Kormantine was the English name for enslaved people from the Akan ethnicity from the Gold Coast in modern Ghana. The term was primarily used in the Caribbean and is now considered archaic.

Arthur Forrest was an officer of the Royal Navy who saw service during the War of the Austrian Succession and the Seven Years' War, rising to the rank of captain and the post of commodore. He also owned 3,000 acres of sugar plantations, and a considerable number of slaves, in the Colony of Jamaica.

Zachary Bayly (1721-1769) was a wealthy planter and politician in Jamaica.

Trinity was a plantation in colonial Jamaica, located south of Port Maria, in Saint Mary Parish, one of several plantations owned by Zachary Bayly that formed part of the area known as Bayly's Vale. By the early nineteenth century, over 1,000 people were enslaved there producing mainly sugar and rum for which a mile-long aqueduct was built by Nathaniel Bayly to supply water for the refining process.

Free black people in Jamaica fell into two categories. Some secured their freedom officially, and lived within the slave communities of the Colony of Jamaica. Others ran away from slavery, and formed independent communities in the forested mountains of the interior. This latter group included the Jamaican Maroons, and subsequent fugitives from the sugar and coffee plantations of coastal Jamaica.