West Hampstead is an area in the London Borough of Camden in north-west London. Mainly defined by the railway stations of the same name, it is situated between Childs Hill to the north, Frognal and Hampstead to the north-east, Swiss Cottage to the east, South Hampstead to the south-east, Kilburn to the west and south-west, and Cricklewood to the north-west. The area is mainly residential with several small shops, restaurants, cafes, bakeries concentrated on the northern section of West End Lane and around West End Green. It is served by three stations: West Hampstead on the Jubilee line, West Hampstead Overground station and West Hampstead Thameslink station. It is part of the Kilburn postal district (NW6).

An area, known as "le Rudyng" (indicating a woodland clearing) in the mid-13th century, had by 1534 come to be called West End. It was then a freehold estate belonging to Kilburn Priory, and was so called because it was at the west end of another, larger estate. Although it is possible that there was a dwelling on the estate prior to 1244, an estate house was certainly extant by 1646. [1] West End Lane (named as such by 1644), the main road through the area, is still bent at a right-angle at the north and south ends where it connects to Finchley Road and Edgware Road respectively. This is because the lane used to form the boundary between a number of different estates. [1]

By the early 17th century several houses were present, and by the middle of that century London merchants were building larger houses in the area. By 1800 West End was a hamlet of two to three dozen houses and cottages located in parkland, mostly on the west side of West End Lane and Fortune Green Lane, and north of the present-day railway lines. West End Lane had been rerouted, making it straighter and lying further to the west than previously. In 1851 residents were mainly agricultural labourers, gardeners, craftsmen and tradespeople, with an innkeeper, two beershop keepers, a schoolmistress and a few gentry. [1] There were three main large houses: West End House, West End Hall and Lauriston Lodge. [2]

Transformation of the area started with the construction of three railway lines across West End Lane: Hampstead Junction Railway, built by 1857; Midland line, opened in 1868; and Metropolitan & St. John's Wood line, opened in 1879. West Hampstead was the name adopted by Metropolitan & St. John's Wood for its station on West End Lane. The period of greatest development for the area was the 15 years from the opening of that station, with estates on the west side of West End Lane being turned from farmland and parkland into housing estates. [1] [2] Large scale development on the east side of West End Lane started in 1897, with the redevelopment of the properties where the three large houses of West End Hall, Canterbury House and Treherne House had stood until then. [1]

There are three railway stations named West Hampstead, all within close proximity, and a number of other tube stations in the area. Numerous bus routes pass through the district. 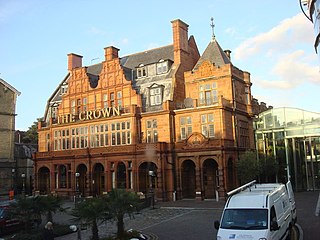 Cricklewood is an area of London, England, which spans the boundaries of three London boroughs: Barnet to the east, Brent to the west and Camden to the south-east. The Crown pub, now the Clayton Crown Hotel, is a local landmark and lies 5 miles (8 km) north-west of Charing Cross. 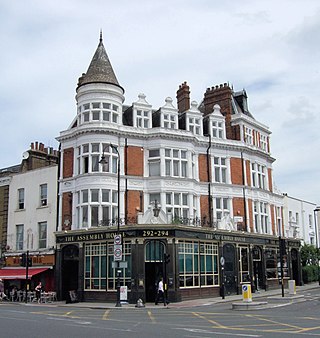 Kentish Town is an area of northwest London, England in the London Borough of Camden, immediately north of Camden Town. Less than four miles north of central London, Kentish Town has good transport connections and is situated close to the open spaces of Hampstead Heath.

Kilburn is an area of north west London, England, which spans the boundary of three London Boroughs: Camden to the east, City of Westminster, Brent to the west. There is also an area in the City of Westminster, known as West Kilburn and sometimes treated as a distinct locality. Kilburn High Road railway station lies 3.5 miles (5.6 km) north-west of Charing Cross. 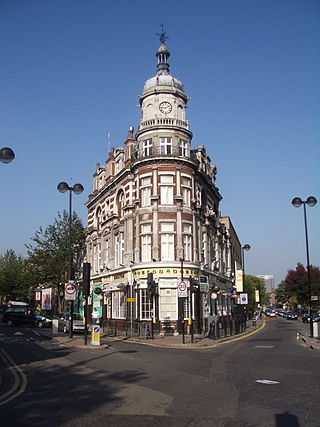 Tufnell Park is an area in north London, England, in the London boroughs of Islington and Camden. 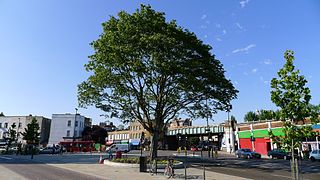 Herne Hill is a district in South London, approximately four miles from Charing Cross and bordered by Brixton, Camberwell, Dulwich, and Tulse Hill. It sits to the north and east of Brockwell Park and straddles the boundary between the boroughs of Lambeth and Southwark. There is a road of the same name in the area, as well as a railway station. 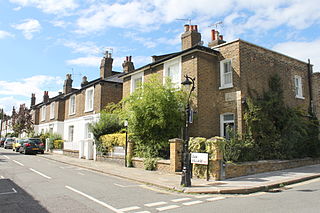 Gospel Oak is an inner urban area of north west London in the London Borough of Camden at the very south of Hampstead Heath. The neighbourhood is positioned between Hampstead to the north-west, Dartmouth Park to the north-east, Kentish Town to the south-east, and Belsize Park to the south-west. Gospel Oak lies across the NW5 and NW3 postcodes and is served by Gospel Oak station on the London Overground. The North London Suburb, Gospel Oak, has many schools around it.

The North London Railway (NLR) company had lines connecting the northern suburbs of London with the East and West India Docks further east. The main east to west route is now part of London Overground's North London Line. Other NLR lines fell into disuse but were later revived as part of the Docklands Light Railway, and London Overground's East London Line. The company was originally called the East & West India Docks & Birmingham Junction Railway (E&WID&BJR) from its start in 1850, until 1853. in 1909 it entered into an agreement with the London and North Western Railway which introduced common management, and the NLR was taken over completely by the LNWR in 1922. The LNWR itself became part of the LMS from the start of 1923. The railways were nationalised in 1948 and most LMS lines, including the North London route, then came under the control of the London Midland Region of British Railways. 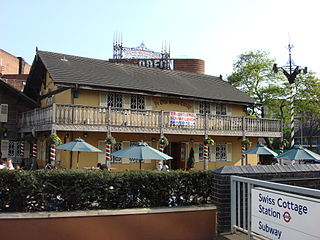 Swiss Cottage is an area of Hampstead in the London Borough of Camden, England. It is centred on the junction of Avenue Road and Finchley Road and includes Swiss Cottage tube station. Swiss Cottage lies 3.25 miles (5.23 km) north-northwest of Charing Cross. The area was named after a public house in the centre of it, known as "Ye Olde Swiss Cottage".

West Hampstead is an area in north-west London, England that is served by a number of different stations, all of which have very similar names. Although physically separate, they are near each other and the stations form a railway interchange. Two of the stations are part of the National Rail network and the third is on the London Underground. 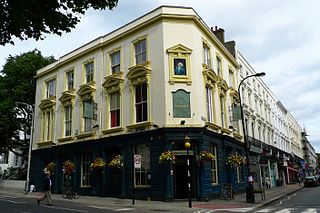 South Hampstead railway station is on Loudoun Road in the London Borough of Camden. It is served by London Overground services on the Watford DC line. It is about 550 yards (500 m) south west of Swiss Cottage Underground station. 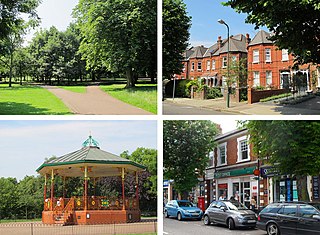 Queen's Park is an area located partly in the City of Westminster and partly in the London Borough of Brent. Some of the area within Westminster forms a civil parish, the first to be created in London since the right of communities to establish civil parishes was enacted in 2007. The area is located 3.9 miles (6.3 km) north-west of Charing Cross, and centred around a 30 acres (12 ha) park, which opened in 1887 and was named in honour of Queen Victoria. The area gives its name to Queens Park Rangers football club.

The Watford DC line is a suburban line from London Euston to Watford Junction in Watford, Hertfordshire. Its services are operated by London Overground.

South Hampstead is part of the London Borough of Camden in inner north London. It is commonly defined as the area between West End Lane in the west, the Chiltern Main Line (south), Broadhurst Gardens north and north-west followed by a non-road line demarcating the south slopes of Hampstead village, west of Belsize Park, and north and west of the usually narrowly defined Swiss Cottage neighbourhood. It takes in some of Fitzjohns Avenue leading up to "the village", but the exact amount is an arbitrary measure.

West Hampstead railway station is a London Overground station on the North London Line between Brondesbury and Finchley Road & Frognal in the London Borough of Camden and is in Travelcard Zone 2. 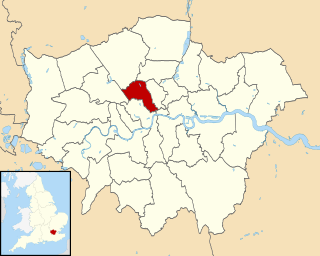 The London Borough of Camden is a London borough in Inner London. Camden Town Hall, on Euston Road, lies 1.4 mi (2.3 km) north of Charing Cross. The borough was established on 1 April 1965 from the area of the former boroughs of Hampstead, Holborn, and St Pancras—which together, prior to that date, had comprised part of the historic County of London.

Klooks Kleek was a jazz and rhythm 'n’ blues club on the first floor of the Railway Hotel, West Hampstead, north-west London. 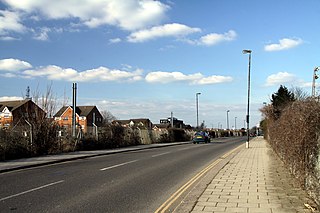