Bexleyheath is a town in south-east London, England, located in the London Borough of Bexley. It had a population of 31,929 as at 2011. Bexleyheath is located 12 miles (19.3 km) south-east of Charing Cross. It is identified in the London Plan as one of 35 major centres in London. [2] Its wider definition is that of a small post town that takes in other surrounding neighbourhoods, including Barnehurst, much of West Heath and the former hamlet of Upton. [lower-alpha 1]

For most of its history, Bexley heath was heath land. The Romans build a road through the heath, Watling Street, which connected Londinium (London) to Dubris (Dover). This Roman road still marks the spine of Bexley new town. [4] : 1

In the early 19th century, Bexley heath was a broad rough pasture and scrubland with few buildings. Its windmill stood to the north east, where Erith and Mayplace Roads now meet. [5] : 11  In 1766 Sir John Boyd had Danson House built in his enclosed land ("park"). [6] The core of this remains as Danson Park between the southern halves of Bexleyheath and Welling. In 1814 most of the rest of what was Bexley heath, north of Bexley, became enclosed (privatised) with a fund of money given in compensation to trustees for the poor of the parish. [5] : 4

In 1859 architect Philip Webb designed Red House for artist, reforming designer and socialist William Morris on the western edge of the heath, in the hamlet of Upton—before Upton became a suburb. The National Trust acquired the house in 2003. Morris wanted to have a "Palace of Art" in which he and his friends could enjoy producing works of art. The house is of red brick with a steep tiled roof and an emphasis on natural materials. It is in a brick-and-tile style to resemble cumulative generational additions. Its layout and geometrics are non-uniform and it is recognised and protected with highest category (Grade I) listed building status as it is avant-garde to influential Arts and Crafts architecture. Morris lived with wife Jane in the house for five years, during which time their two daughters, Jenny and May, were born. Needing to sell the house in 1865 to economise, Morris vowed never to return to it; he said that to see the house again would be more than he could bear. [5] : 9

Bexleyheath's parish church, Christ Church, dates from 1841; and the ecclesiastical parish from 1866; the building of the current church finished in 1877. [5] : 6  Alfred Bean, railway engineer and one-time owner of Danson House, furthered the development of Bexleyheath as a London suburb by championing the Bexleyheath Line in the 1880s to support the growth of estates around Danson Park.[ citation needed ]

The clock tower at the centre of the modern shopping area, built in 1912, commemorates the coronation of King George V. [5] : 24

The area was part of the historic county of Kent until the creation of Greater London in 1965, at which point Bexleyheath became the administrative base of the newly established London Borough of Bexley. [7] The town centre shops and road layout were redeveloped in the 1980s and 1990s. The latter decade saw the pedestrianisation of the road adjacent to the shopping centre having built two minor bypass roads, Arnsburg Way and Albion Way.[ citation needed ]

The vast majority of restaurants and eateries are on Broadway. The south side of the central, pedestrianised section of Broadway hosts Broadway Shopping Centre, a covered example completed in 1984, and a substantial supermarket four years later, [lower-alpha 2] as in other urban places including New Towns. A cinema stands to the east facing a medium-sized supermarket.

A renovation in 2008 on "The Mall" gave the centre a more modern interior. The appending of "Bexleyheath Square" took place in the early 2000s, more retail units. Much of this investment provides local competition to Bluewater Shopping Centre, 5+1⁄2 miles (8.9 km) east in Greenhithe, Kent.

The statue outside the Broadway Centre is "Family Outing" by local artist John Ravera; it was commissioned by Norwich Union and unveiled in 1985. [8]

In May 2009 a major redevelopment scheme was approved by the local council following public consultation. This involved the redevelopment of the Bexley council buildings. The magistrates' court was to move to a new building where the library stands, which would be incorporated into the new development of 300 new homes. The work did not proceed as the shopping centre was sold.

In work commencing 2012, the Borough's Civic Offices were converted from the former main office of The Woolwich, which had been vacant seven years. [9] For the resultant vacant site in June 2018, housebuilder Bellway was approved to build 518 homes, of which 110 affordable. The development will include Bexleyheath's tallest building (13 storeys), public realm improvements and offices/retail. [10]

Given cumulative retail investment, Bexleyheath draws many customers particularly from Erith, Thamesmead, Plumstead and Woolwich which adjoin the River Thames.

Bexleyheath and Belvedere Hockey Club are based in Welling, but play some home matches at Erith School. [11]

Cultural events include regular concerts by the Sidcup Symphony Orchestra held in the hall of Townley Grammar School. The town's theatre, founded in 1976, produces many amateur productions.[ citation needed ]

The town is served by Bexleyheath railway station, 3⁄4 kilometre (0.5 mi) north-west of the centre on Station Road. The station is on the Bexleyheath Line, the middle of three lines connecting London and Dartford. Rail services connect the station to London Victoria via Peckham Rye, London Charing Cross, London Cannon Street, Barnehurst, Gravesend and Dartford.

See also: List of people from the London Borough of Bexley 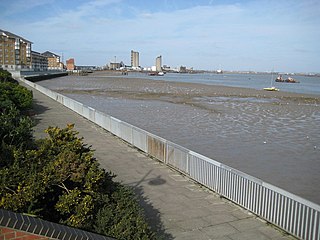 Erith is an area in south-east London, England, 13.3 miles (21.4 km) east of Charing Cross. Before the creation of Greater London in 1965, it was in the historical county of Kent. Since 1965 it has formed part of the London Borough of Bexley. It lies north-east of Bexleyheath and north-west of Dartford, on the south bank of the River Thames.

Welling is an area of South East London, England, in the London Borough of Bexley, 1.5 miles (2.4 km) west of Bexleyheath, 4 miles (6.4 km) southeast of Woolwich and 10.5 miles (16.9 km) of Charing Cross. Before the creation of Greater London in 1965, it was in the historical county of Kent.

Bexley is an area of south-eastern Greater London, England and part of the London Borough of Bexley. It is sometimes known as Bexley Village or Old Bexley to differentiate the area from the wider borough. It is located 13 miles (21 km) east-southeast of Charing Cross and south of Bexleyheath. 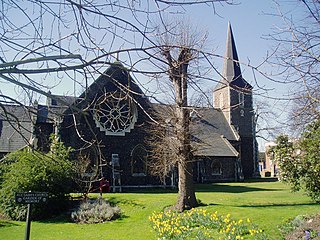 Belvedere is a town in south east London, England, within the London Borough of Bexley. It lies close to the River Thames, with Erith to the east, Bexleyheath to the south, and Abbey Wood and Thamesmead to the west. Prior to the creation of Greater London in 1965, Belvedere was in the administrative county of Kent.

The Bexleyheath line runs for 8 miles (13 km) from Lewisham to Dartford in Kent. It separates from the North Kent Line just to the east of Blackheath Station, and rejoins the same line just south of Slade Green near Dartford.

Barnehurst is a town and electoral ward in South East London within the London Borough of Bexley. It lies north east of Bexleyheath, and 13.0 miles (20 km) east south-east of Charing Cross. It is separated from North Bexleyheath by the A220, Erith Road. 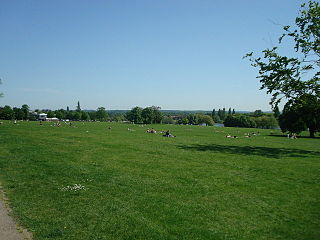 Danson Park is a public park in the London Borough of Bexley, South East London, located between Welling and Bexleyheath. At 75 hectares, it is the second largest public park in the borough, and the most used by the community. Opened in 1925, it is often considered the finest green open space in the borough, and is Grade II listed on the Register of Historic Parks and Gardens. The park also gives its name to the electoral ward that covers the park and the surrounding area. The park is located at grid reference TQ472752. The southern boundary of both the park and the ward is delineated by Rochester Way, the A2 road.

Bexleyheath and Crayford is a constituency represented in the House of Commons of the UK Parliament since 2005 by David Evennett, a Conservative.

Erith and Thamesmead is a constituency created in 1997 and represented in the House of Commons of the UK Parliament since 2019 by Abena Oppong-Asare of the Labour Party. 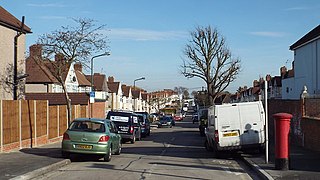 Blackfen is an area of south-east London, England, north of Sidcup in the London Borough of Bexley. Prior to 1965 it was in the county of Kent. 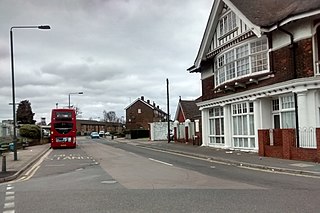 Slade Green is an area of South East London, England, within the London Borough of Bexley. It lies northeast of Bexleyheath, northwest of Dartford and south of Erith, and 14 miles (23 km) east-southeast of Charing Cross.

Northumberland Heath is an area of South East London, England within the London Borough of Bexley. It is located south of Erith and north of Bexleyheath. 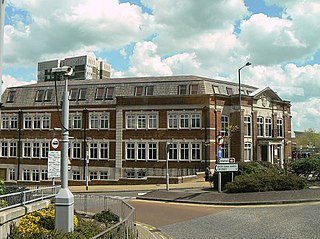 Erith was a local government district in north west Kent from 1876 to 1965 around the town of Erith. It also included the generally suburban areas of Northumberland Heath, Belvedere, and parts of Barnehurst, Bexleyheath, Crayford and the SE2 London Postal District of Abbey Wood.

The London Borough of Bexley owns and maintains over 100 parks and open spaces within its boundaries, with a total of 638 hectares. They include small gardens, river and woodland areas, and large parks with many sporting and other facilities.

Bexleyheath was a parliamentary constituency in south-east London, which returned one Member of Parliament (MP) to the House of Commons of the Parliament of the United Kingdom.

Bromley College of Further and Higher Education, trading as London South East Colleges (LSEC), is a large college of further education and higher education operating in south-east London, England. It is a partner college of six of the twelve schools of the University of Greenwich. LSEC was established in 2016 by the amalgamation of Bromley College, Greenwich Community College and Bexley College. Its largest campus is in the town of Bromley, and others are situated in Erith, Plumstead and Orpington.

The Bexley Civic Offices is a municipal facility in Watling Street, Bexleyheath, London. It is the headquarters of the Bexley London Borough Council.