Gunnersbury is an area of West London, England.

The name "Gunnersbury" means "Manor house of a woman called Gunnhildr", and is from an old Scandinavian personal name + Middle English -bury, manor or manor house. [1]

Gunnersbury consists mainly of pre-war housing of a variety of types, including flats, terrace, semi detached, and detached houses, some of which are ex-local authority built.

The defining symbol of Gunnersbury is the 18-storey high BSI (British Standards Institution) building on Chiswick High Road. Between 1966 and 1992 the block housed a divisional headquarters of IBM UK. Below this building Gunnersbury station serves the Richmond branch of the District line and the London Overground to Stratford.

On the north side of the High Road is The Gunnersbury, formerly the John Bull pub, built in 1853, with a billiards saloon built a little later. It became a music venue, visited by bands including The Who. [2]

Immediately to the east is Gunnersbury Triangle nature reserve. An area of woodland, it supports many species of birds, plants, and animals. It has free admission and its entrance is on the south of Bollo Lane, a few yards from Chiswick Park Tube Station. [9] [10]

Gunnersbury lends its name to a nearby secondary school, formerly a Grammar School, in Brentford. Gunnersbury Catholic School is a boys-only Catholic comprehensive with co-educational sixth form. It used to be located on Gunnersbury Avenue and it backed on to Gunnersbury Park. Since 1984, it has been located in The Ride, Brentford.

In 1886, Gunnersbury was given its own parish church, dedicated to Saint James. The church stood on Chiswick High Road, near Chiswick Roundabout. The church was decommissioned just over a century later, in 1987, and demolished soon afterwards. The parish was united with that of St Paul's, Brentford. [13]

Hounslow is a large suburban district of West London, 10+3⁄4 miles west-southwest of Charing Cross. It is the administrative centre of the London Borough of Hounslow, and is identified in the London Plan as one of the 12 metropolitan centres in Greater London. 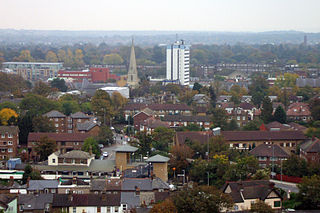 Brentford is a suburban town in West London, England and part of the London Borough of Hounslow. It lies at the confluence of the River Brent and the Thames, 8 miles (13 km) west of Charing Cross. 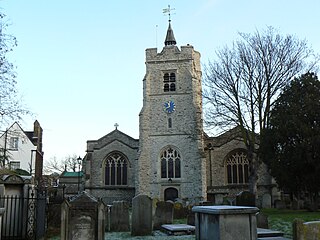 Chiswick is a district of west London, England. It contains Hogarth's House, the former residence of the 18th-century English artist William Hogarth; Chiswick House, a neo-Palladian villa regarded as one of the finest in England; and Fuller's Brewery, London's largest and oldest brewery. In a meander of the River Thames used for competitive and recreational rowing, with several rowing clubs on the river bank, the finishing post for the Boat Race is just downstream of Chiswick Bridge.

The London Borough of Hounslow is a London borough in West London, England, forming part of Outer London. It was created in 1965 when three smaller borough councils amalgamated under the London Government Act 1963. It is governed by Hounslow London Borough Council. 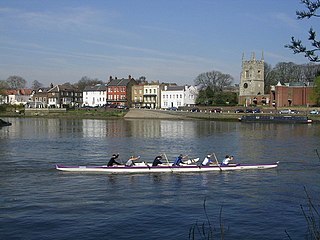 Isleworth is a town located within the London Borough of Hounslow in West London, England. It lies immediately east of the town of Hounslow and west of the River Thames and its tributary the River Crane. Isleworth's original area of settlement, alongside the Thames, is known as 'Old Isleworth'. The north-west corner of the town, bordering on Osterley to the north and Lampton to the west, is known as 'Spring Grove'. 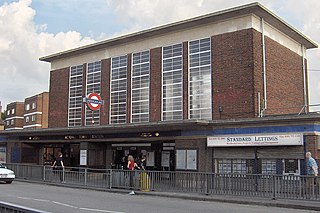 Acton Town is a London Underground station in the south-west corner of Acton, West London, in the London Borough of Ealing, close to the border with the London Borough of Hounslow. The station is served by the District and Piccadilly lines and is in Travelcard Zone 3. On the District line, it is between Chiswick Park and Ealing Common stations, and on the Piccadilly line it is between Hammersmith and Ealing Common on the Uxbridge branch & South Ealing on the Heathrow branch. Acton Town station was opened as Mill Hill Park on 1 July 1879 by the District Railway. It remained as a terminus until on 1 May 1883 and 23 June 1903 the DR opened two branches from Acton Town to Hounslow Town and Park Royal & Twyford Abbey respectively. On 4 July 1932 the Piccadilly line was extended to Acton Town. District line services to both the Hounslow and Uxbridge branches were withdrawn completely on 9 and 10 October 1964 after which operations were provided by the Piccadilly line alone.

Boston Manor is a London Underground station at the boundary of the boroughs Hounslow and Ealing. The station is situated on the Heathrow branch of the Piccadilly line, between Osterley and Northfields stations, in Travelcard Zone 4. 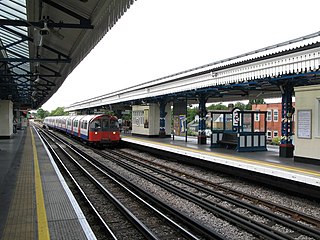 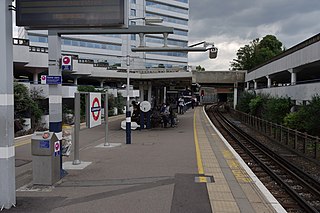 Gunnersbury is a London Overground and London Underground station in Gunnersbury in London, England on the North London line. The station opened on 1 January 1869 and is served by District line trains to and from Richmond, and by Arriva Rail London on the London Overground network. On the District line the station is between Turnham Green and Kew Gardens, and on the North London line it is between South Acton and Kew Gardens. 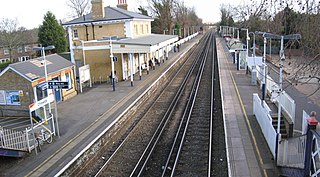 Chiswick railway station is a railway station within the Grove Park residential area of Chiswick in the London Borough of Hounslow. The station is on the Hounslow Loop Line, and all trains serving it are operated by South Western Railway. Journey time into London Waterloo is approximately 25 minutes and Clapham Junction 15 minutes. The station is in Travelcard Zone 3.

The London Borough of Hounslow is a peripheral London borough in the south-west of the conurbation; as such part of the Metropolitan Green Belt lies within its boundaries. It has one of London's largest Nature reserves as well as many smaller gardens and sports grounds. The major areas are:

The London Borough of Ealing, one of the outer London boroughs although not on the periphery, has over 100 parks and open spaces within its boundaries. These include allotments, cemeteries, playgrounds, and golf courses in addition to the larger open spaces such as nature conservation areas. 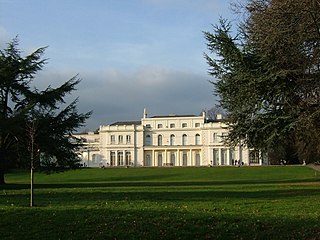 Gunnersbury Park is a park in the London Borough of Hounslow between Acton, Brentford, Chiswick and Ealing, West London, England. Purchased for the nation from the Rothschild family, it was opened to the public by Neville Chamberlain, then Minister of Health, on 21 May 1926. The park is currently jointly managed by Hounslow and Ealing borough councils. A major restoration project funded by the Heritage Lottery Fund was completed in 2018. The park and garden is Grade II listed. 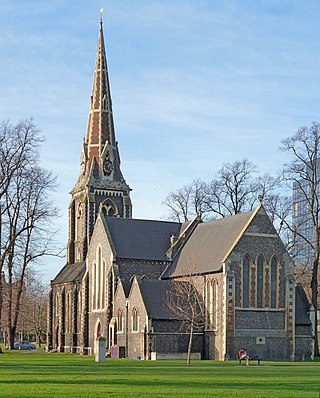 Turnham Green is a public park on Chiswick High Road, Chiswick, London, and the neighbourhood and conservation area around it; historically, it was one of the four medieval villages in the Chiswick area, the others being Old Chiswick, Little Sutton, and Strand-on-the-Green. Christ Church, a neo-Gothic building designed by George Gilbert Scott and built in 1843, stands on the eastern half of the green. A war memorial stands on the eastern corner. On the south side is the old Chiswick Town Hall. 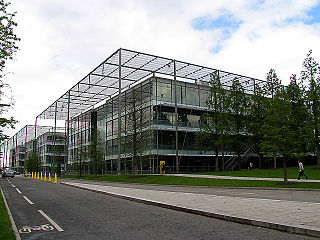 Acton Green is a residential neighbourhood in Chiswick and the London Borough of Ealing, in West London, England. It is named for the nearby Acton Green common. It was once home to many small laundries and was accordingly known as "Soapsuds Island". 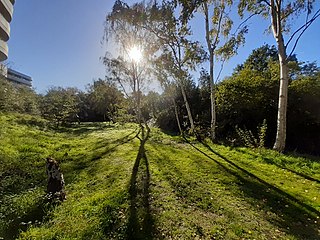 Gunnersbury Triangle is a 2.57-hectare (6.4-acre) local nature reserve in Chiswick, in the London boroughs of Ealing and Hounslow, immediately to the east of Gunnersbury. It was created in 1983 when, for the first time in Britain, a public inquiry ruled that a planned development of the land could not go ahead because of its value for nature. It opened as a nature reserve in 1985. 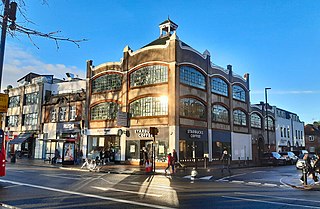 Chiswick High Road is the principal shopping and dining street of Chiswick, a district in the west of London. It was part of the main Roman road running west out of London, and remained the main road until the 1950s when the A4 was built across Chiswick. By the 19th century the road through the village of Turnham Green had grand houses beside it. The road developed into a shopping centre when Chiswick became built up with new streets and housing to the north of Old Chiswick, late in the 19th century. There are several listed buildings including public houses, churches, and a former power station, built to supply electricity to the tram network.