Sidcup is an area of south-east London, England, primarily in the London Borough of Bexley. It is 11.3 miles (18.2 km) south-east of Charing Cross, bordering the London Boroughs of Bromley and Greenwich. Before the creation of Greater London in 1965, it was in the historical county of Kent.

The name is thought to be derived from Cetecopp meaning "seat shaped or flat topped hill"; it had its earliest recorded use in 1254. [2] The population of Sidcup, including its neighbourhoods Foots Cray, North Cray, Albany Park, Longlands, Ruxley, Blackfen and Lamorbey, was 43,109 in 2011.

Sidcup originated as a tiny hamlet on the road from Maidstone to London. According to Edward Hasted, "Thomas de Sedcopp was owner of this estate in the 35th year of king Henry VI. [i.e. in the 1450s] as appears by his deed." [3] Hasted described Sidcup in the latter part of the 18th century as "a small street of houses, among which is an inn of much resort", referring to the former Black Horse pub on the high street. [4]

A number of manor houses, converted to other uses, remain. They include Frognal House, the birthplace and residence of Thomas Townshend, 1st Viscount Sydney, converted for use as residential and nursing accommodation; Lamorbey House, now used by Rose Bruford College; Sidcup Place, a bar and restaurant; and The Hollies, converted for residential use.

Sidcup has a mixture of large Victorian and Edwardian properties alongside typical 1930s suburbia. It retains many parks and open spaces hinting at the great estates and large homes which once stood in the area.

The town contains Queen Mary's Hospital, a large Leisure Centre, four colleges and three secondary schools. Sidcup High Street is the main retail and commercial street, and there are some other shops and local businesses on the adjacent Station Road. In 2014, Sidcup High Street was the subject of a £1.8 million regeneration scheme In Store For Sidcup paid for by London Borough of Bexley. [7]

Most of the district is within the London Borough of Bexley, however, several parts in the North are under the governance of the Royal Borough of Greenwich, including Southspring, Greenhithe Close, Halfway Street (offsite Avery Hill), Radfield Way, Croyde Close and Overmead.

In 2011 The total population was recorded as 10,844. Many residents are aged 65+ or 85+, in line with the whole of London Borough of Bexley. At the census of 2011, the non-white population of Sidcup was recorded at 10.1%; the largest minority group were Asian or Asian British (5.4% of the total population), with White Other totalling 4.8% of the total population. The number of single parent families was higher in the district in comparison to the rest of the London Borough of Bexley. 63.8% reported Christianity as their religious beliefs which was above the borough average. However, these figures do not include the Blackfen and Lamorbey wards within the district. [8]

For education in Sidcup, see London Borough of Bexley § Education.

Sidcup also has a Leisure Centre on Hurst Road with 2 pools and a gym.

The Sidcup and District Motor Cycle Club was formed at the Station Hotel, Sidcup in 1928. The club owns the Canada Heights motorcycle sport venue in Button Street, Swanley. [9]

Sidcup is home to the Rose Bruford College of drama and Bird College, both of which have several famous alumni, and the Sidcup Symphony Orchestra, [10] which also serves the wider South East London area. In an interview with Lake Bell (who studied at Rose Bruford College) in 2015, comedian James Corden described Sidcup as "the armpit of England" on his late night American chat show The Late Late Show with James Corden . [11]

The murder of teenager Rob Knox at the Metro Bar on Station Road in 2008 was national headline news. Knox was an aspiring actor who had, just before his death, filmed a small part in Harry Potter and the Half-Blood Prince . He was killed protecting his brother from a group of youths. [12] His murderer, Karl Bishop, also from Sidcup, was later found guilty of murder and sentenced. [13] Following Knox's death, his family have campaigned to end knife crime among young people. [14] The Rob Knox Foundation has organised a Rob Knox Film Festival in Sidcup and the neighbouring town of Bexleyheath, and a bench was dedicated to Knox at St John's Church in Sidcup in 2015. [15]

Sidcup railway station opened in October 1866, a month after the opening of the Dartford Loop Line on 1 September 1866. It is 1 mile (1.6 km) north of Sidcup town centre. The station provides the area with Southeastern services to London Charing Cross and to Gravesend.

Sidcup High Street is on the A211, following in length the old London – Maidstone – Hythe road. The A211 starts just after Eltham High Street, in the middle running along the A20 Sidcup By-pass before ending at Foots Cray, where the B2173 continues along the former A20 road. The A211 connects the two main roads in this district; Station Road and Main Road.

East Rochester Way on the A2 road runs partly through the district, adjoining Blackfen Road. The road provides links to the Blackwall Tunnel and Kent. 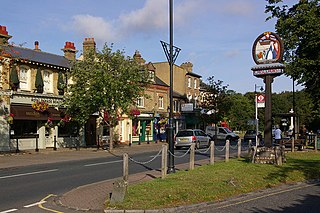 Chislehurst is a suburban district of south-east London, England, in the London Borough of Bromley. It lies east of Bromley, south-west of Sidcup and north-west of Orpington, 10 miles (16 km) south-east of Charing Cross. Before the creation of Greater London in 1965, it was in Kent.

Welling is an area of South East London, England, in the London Borough of Bexley, 1.5 miles (2.4 km) west of Bexleyheath, 4 miles (6.4 km) southeast of Woolwich and 10.5 miles (16.9 km) of Charing Cross. Before the creation of Greater London in 1965, it was in the historical county of Kent.

The London Borough of Bromley is the southeasternmost of the London boroughs that make up Greater London, bordering the ceremonial county of Kent, which most of Bromley was part of before 1965. The borough's population is an estimated 332,336. It is named after Bromley, its principal town; other major towns are Penge, Hayes, West Wickham, Chislehurst, Beckenham and Orpington. The local authority is Bromley London Borough Council. 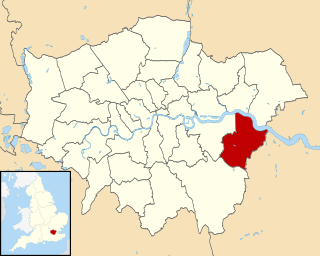 Bexley is an area of south-eastern Greater London, England and part of the London Borough of Bexley. It is sometimes known as Bexley Village or Old Bexley to differentiate the area from the wider borough. It is located 13 miles (21 km) east-southeast of Charing Cross and south of Bexleyheath.

Chislehurst and Sidcup Urban District was a local government district and civil parish in north west Kent, England from 1934 to 1965. 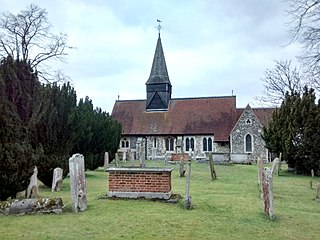 Foots Cray is an area of South East London, England, within the London Borough of Bexley, Greater London. Prior to 1965 it was in the historic county of Kent. It is located south-east of Sidcup. 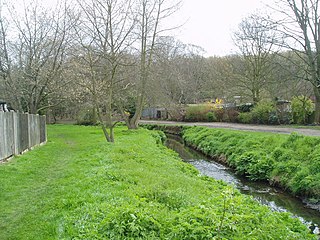 The River Shuttle is a small tributary of the River Cray in London, United Kingdom. 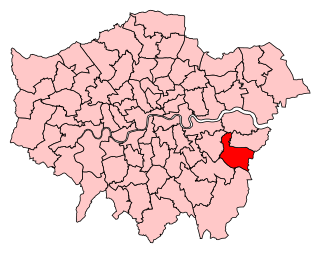 Old Bexley and Sidcup is a constituency created in 1983 and represented in the House of Commons of the UK Parliament represented since 2021 by Louie French of the Conservative Party.

Blackfen is an area of south-east London, England, north of Sidcup in the London Borough of Bexley and the historic county of Kent.

The London Borough of Bexley owns and maintains over 100 parks and open spaces within its boundaries, with a total of 638 hectares. They include small gardens, river and woodland areas, and large parks with many sporting and other facilities.

Lamorbey is a district of South East London in the London Borough of Bexley, located north of Sidcup. It borders the Royal Borough of Greenwich. Significant buildings in the area are Holy Trinity Church, Lamorbey House and some of the original surviving buildings of The Hollies children's home. The oldest house in Sidcup, dating from 1452, can also be found in the district. 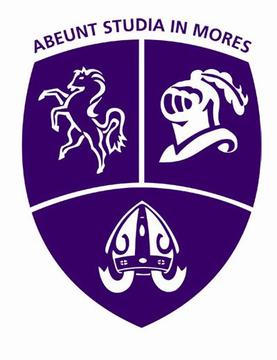 Chislehurst and Sidcup Grammar School is a mixed-sex grammar school with academy status located in Hurst Road (A222), Sidcup in the London Borough of Bexley, England. It is located adjacent to Lamorbey Park, the Rose Bruford College drama school and Hurstmere School. Pupils at the school are divided into a series of six houses, known as Davies, Edlmann, Lester, Townshend, Williams, and Staff, while an annual school magazine, The Chronicle, is also produced by the students. The current head teacher, Nigel Walker, has held his position since 2009.

Sidcup was a parliamentary constituency centred on Sidcup, an outer suburb of London in the London Borough of Bexley. It returned one Member of Parliament (MP) to the House of Commons of the Parliament of the United Kingdom.

Longlands is an area of South East London overlapping the London Boroughs of Bexley, Bromley and Greenwich. It lies north west of Sidcup and south east of Eltham.

Wyncham Stream is a small river within the London Boroughs of Bexley and Bromley in southeast London, England, United Kingdom. It is 5.6 km (3.5 mi) in length and is a tributary of the River Shuttle.

Ruxley is a small settlement in southeast London, England, with no present formal boundaries. It is located 21 km (13 mi) southeast by east of Charing Cross, in the northeast corner of the London Borough of Bromley on the borough boundary with the southeast corner of the London Borough of Bexley, and is also adjacent to the Greater London border with Kent, overlapping into the Sevenoaks District and Borough of Dartford in Kent. Ruxley lies east of Sidcup and west of Swanley, on green belt land, where two main roads pass through east-west connecting London to the coast. Ruxley was a parish prior to 1557 and had its own thirteenth century church, St Botolph's. Ruxley's central location on the main road made it an important meeting place for the Hundred of Ruxley, which was named after it. Today still a major transport route, Ruxley's location on green belt land is on the edge of London's urban sprawl, industrial and residential areas are found on the west side, but to the east this quickly turns into more rural woodland and farmland. Ruxley Gravel Pits is a biological Site of Special Scientific Interest located on the west side of Ruxley. Today the area is known for Ruxley Manor, a large site with a garden centre and other retailers and services.

North Cray is a village in south-east London, England, within the London Borough of Bexley. It is 12.6 miles (20.3 km) south-east of Charing Cross.

Lamorbey Park is a 57-hectare (140-acre) park in Lamorbey, in the London Borough of Bexley, set around a Grade II listed mansion, Lamorbey House. The original 17th century estate consisted of 119 hectares, but over time sections of the estate have been separated for other uses, including two secondary schools, Rose Bruford College, and Sidcup Golf Club. The area of the park still in public ownership includes The Glade, a 7.4-hectare (18-acre) area of historic landscape laid in the 1920s with a large lake. The park was added to the Register of Historic Parks and Gardens of special historic interest in 1988.