Cineworld Group is a British cinema company based in London, England. It is the world's second-largest cinema chain (after AMC Theatres), with 9,518 screens across 790 sites [2] in 10 countries: [3] Bulgaria, Czech Republic, Hungary, Ireland, Israel, Poland, Romania, Slovakia, United Kingdom and the United States. [2] [4] The group's primary brands are Cineworld and Picturehouse in the United Kingdom and Ireland, Cinema City in Eastern and Central Europe, Yes Planet in Israel, and Regal Cinemas in the United States.

As of March 2018, Cineworld was the leading cinema operator in the UK by box office market share (based on revenue), [5] with 99 cinemas and over 1,017 screens, [6] including Cineworld Dublin—Ireland's single largest multiplex by screens and customer base. [7] Cineworld Glasgow Renfrew Street is the tallest cinema in the world and the busiest, by customer base, in the UK. [8] It is listed on the London Stock Exchange and is a constituent of the FTSE 250 Index.

In December 2012, Cineworld acquired the Picturehouse Cinema chain, adding 21 cinemas to its portfolio, including The Little Theatre in Bath, Brighton's Duke of York's cinema, the Cameo, Edinburgh, the Phoenix in Oxford and the Ritzy Cinema in Brixton. [14]

The Blackstone Group, which had invested in Cineworld when it was privately owned, sold its entire remaining 20% shareholding in November 2010. [15] In August 2013, The Guardian revealed that Cineworld employs 80% of its 4,300 staff on zero hour contracts. [16] In October 2013, the Chester location was closed due to the landowner wanting to develop the land into a supermarket. [17]

In 2014, Cineworld's Picturehouse chain was subject to industrial action owing to its refusal to pay the London living wage to its staff. The workforce attracted the support of Eric Cantona. [18] On 27 February 2014, Cineworld completed the takeover of Cinema City International N.V.. [19] As of March 2015, the Greidinger family (who owned a controlling 54% stake in Cinema City International) held a controlling bloc as the largest shareholders in the enlarged company. [20]

In May 2014, Mooky Greidinger joined the board of directors as CEO, having previously been CEO of Cinema City International. [21]

In November 2017, Cineworld began merger talks with the US cinema chain Regal Cinemas. [25] On 5 December, it was officially announced that Cineworld would buy Regal for US$3.6 billion (£2.7 billion), creating the world's second largest cinema group. It would also allow Cineworld access to the US market, the largest in the world. [26] [27] The acquisition was completed in 2018. [4]

On 16 December 2019, Cineworld announced its proposed acquisition of Cineplex Entertainment—Canada's largest cinema chain—for approximately US$2.1 billion. Cineworld planned to integrate its operations with Regal to achieve cost and revenue synergies, and maintain the Cineplex branding for the Canadian operations This would have made it North America's largest cinema chain. [29] The deal was approved by shareholders in February 2020. [30] On 12 June 2020, however, Cineworld would terminate the purchase agreement due to alleged "material adverse effect and breaches" by Cineplex. The company subsequently sued Cineworld over the aborted purchase. [31] [32]

Impact of the COVID-19 pandemic

On 17 March 2020, Cineworld and all other cinema companies in the UK temporarily closed all their UK cinemas due to the ongoing COVID-19 pandemic. [33] Some 800 staff at Cineworld Group PLC wrote to Chief Executive Moshe Greidinger requesting their jobs back after many were made redundant "with immediate effect". Employees with over three years of service were told they would be retained with 40% of their salary or average pay. The letter said the move would leave many of the affected unable to afford essentials such as housing and food. [34] [35] In late May 2020, Cineworld announced they planned to reopen all its UK cinemas in July. [36] On 14 August 2020, they announced a new reopening schedule, in which their Welsh cinemas would open on 14 August, whereas their Irish, Scottish and Jersey screens would open on 26 August. Their English cinemas had been open since 31 July. [37]

In May 2020, Alicja Kornasiewicz became chair, having been a non-executive director since May 2015. [21]

On 5 October 2020, Cineworld announced the indefinite re-closure of all owned cinemas in the UK, Ireland, and United States from 8 October, citing the delay of major tentpole Hollywood films due to the wider impact of the COVID-19 pandemic on cinema, and its continued inability to reopen cinemas in the key U.S. market of New York (which CEO Mooky Greidinger cited as having resulted in the delays). The decision came three days after the next James Bond film No Time to Die was delayed from November 2020 to 2 April 2021. The company stated that its decision would affect 45,000 workers, 5,500 of them in the UK, and 20,000 in the U.S. [38] [39] [40]

Greidinger stated that Cineworld would reopen the affected cinemas once there is a "solid lineup of releases" ahead. He also stated that its Central European operations would remain active on a case-by-case basis, as they have a stronger dependency on domestic productions than Hollywood productions. [38]

Across the Cineworld estate there are seven different ways in which their customers can watch a movie: 2D, 3D, 4DX, [41] Superscreen, [42] IMAX, VIP, and ScreenX. Prices are set according to the format the customer chooses, and not the movie they choose. As of April 2018, across the European estate there are 38 4DX screens, 35 IMAX screens and 12 VIP auditoriums. [43] Out of 45 cinemas [44] in the world that are fitted with IMAX with Laser projection systems, two are in the UK, both belonging to Cineworld, located in Leicester Square [45] and Sheffield. [46] In April 2018, IMAX And Cineworld Group signed an agreement to install 55 new IMAX with Laser experience in Cineworld and Regal IMAX locations. [47]

Cineworld was the only cinema chain in the United Kingdom to operate a 'strict no food and drink policy' [50] on items that have been bought elsewhere, [49] but in November 2012, the food policy was changed and now states that "neither alcohol nor hot food may be brought onto the premises". [51] In early 2014, Cineworld introduced an allocated seating system, starting as a trial in selected sites including Wembley and rolling out to all their cinemas by the summer. [52] The move was controversial and a Twitter campaign was created against this policy. [53] Cineworld have responded to the criticism stating that it gives customers peace of mind along with other benefits. [54]

Cineworld continues to expand and enhance its estate, with an extensive ongoing build and refurbishment programme. In 2017, the company opened nine new cinema locations with a total of 109 screens; four of which were in the UK and five in the rest of Europe. A further 75 screens were scheduled to open in 2018 in addition. [55] Throughout 2018, the company opened 13 new locations with 108 screens in total, six in the United States, six in the United Kingdom and one in Romania. [4] 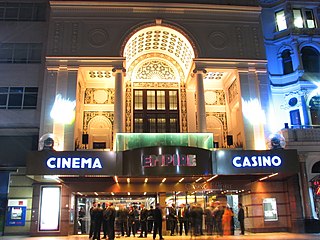 Regal Cinemas is an American movie theater chain headquartered in Knoxville, Tennessee. Regal operates the second-largest theater circuit in the United States, with over 7,200 screens in 549 theaters as of October 2019. The three main theatre brands operated by Regal Entertainment Group are Regal Cinemas, Edwards Theatres, and United Artists Theatres.

Picturehouse Cinemas is a network of cinemas in the United Kingdom, operated by Picturehouse Cinemas Ltd and owned by Cineworld. The company runs its own film distribution arm, Picturehouse Entertainment, which has released acclaimed films such as David Lowery's A Ghost Story, Sally Potter's The Party and Francis Lee's God's Own Country, Custody, Capernaum and The Wife. A previous iteration of this distribution arm, which focused largely on alternative content, was sold in 2017 to Howard Panter and Rosemary Squire and rebranded as Trafalgar Releasing.

Odeon, stylised as ODEON, is a cinema brand name operating in the United Kingdom, Ireland and Norway, which along with UCI Cinemas and Nordic Cinema Group is part of the Odeon Cinemas Group subsidiary of AMC Theatres. It uses the famous name of the Odeon cinema circuit first introduced in Great Britain in 1930.

Empire Theatres Limited was a movie theatre chain in Canada, a subsidiary of Empire Company Ltd., the holding company of the Sobey family conglomerate.

Famous Players Limited Partnership, DBA Famous Players, is a Canadian-based subsidiary of Cineplex Entertainment. As an independent company, it existed as an film exhibitor and cable television service provider. Famous Players operated numerous movie theatre locations in Canada from British Columbia to Newfoundland and Labrador. The company was owned by Viacom Canada but was sold to Onex Corporation-owned Cineplex Galaxy LP in 2005.

Cinema City is a brand of multiplex cinemas in eastern and central Europe, run by the Israeli company Cinema City International (CCI). In Europe it has cinemas in Romania, Bulgaria, Hungary, Poland, Czech Republic and Slovakia. In Poland, Cinema City has almost 40% of the multiplex market, with Multikino its major competitor. CCI also runs a chain of Israeli multiplexes under the name of Rav-Hen.

Crossgates Mall is an enclosed, automobile-oriented, super-regional shopping mall located in the Albany, New York suburb of Guilderland. It is the largest indoor shopping center in the Capital District, and the third largest in the State of New York. The anchor stores are Macy's, Dick's Sporting Goods, Dave & Buster's, Burlington, Forever 21, JCPenney, Get Air Trampoline Park, and Regal Cinemas. There is 1 vacant anchor store that was once Lord & Taylor.

The Poughkeepsie Galleria is a shopping center on U.S. 9 in the Town of Poughkeepsie, New York, located just north of Wappingers Falls, and is the largest shopping center in Dutchess County. The Galleria has an area of 1,100,000-square-foot (100,000 m2) with two floors containing 123 shops and restaurants as well as a 16-screen, stadium-seating Regal Cinemas theater.

Landmark Cinema of Canada Inc. is a Canadian cinema chain. Based in Calgary, it operates 45 theatres with 317 screens, primarily in Ontario, Central, and Western Canada; its holdings include much of the former Empire Theatres chain, which it acquired in late 2013, and selected Famous Players locations divested in its purchase by Cineplex Entertainment. Behind Cineplex, it is the second-largest cinema chain in Canada. It was acquired by Belgian company Kinepolis in 2017 for $123 million.

Warren Theatres is a movie theater chain based in Wichita, Kansas, United States. While the company was founded by Bill Warren, he sold ownership of all Warren Theatres locations to Regal Entertainment Group in 2017.

Neighborhood Cinema Group, branded as NCG Cinemas, is a movie theater chain headquartered in Owosso, Michigan and are owned and operated by the Geiger family. The chain consists at present of 25 theaters with 147 screens. Most of the theaters are located in Michigan with 10 locations, especially in the Flint/Tri-Cities region and the Greater Lansing area. The group also operates in Florida, Georgia, Illinois, Indiana, New York State, North and South Carolina and Tennessee.

The Scotiabank Theatre Toronto is a major movie theatre at the RioCan Hall in the Entertainment District of downtown Toronto, Ontario, Canada at Richmond and John Street owned by Cineplex Entertainment and opened in 1999. The venue screens theatrical films throughout the year, but is best known as one of the major venues for the annual Toronto International Film Festival alongside the nearby TIFF Bell Lightbox.

Moshe "Mooky" Joseph Greidinger is an Israeli businessman and the chief executive officer (CEO) of Cineworld, the world's second largest cinema chain. Together with his brother Israel, they own 29% of the company. He was previously CEO of Cinema City International, originally founded by his grandfather. His family has had interests in the cinema business since the 1930s.