For more in depth, albeit general, information see Football in Japan.

In the first national female football tournament in 1980, women played 8-a-side football and on smaller soccer fields than their male counterparts. [3] [4]

The Nadeshiko League is the national competition for female football players in Japan which began in 1989. [5] [6] It is a three-tiered system. [7]

The team, organized by the Japan Football Association, is the only Asian women's side to win FIFA Women's World Cup, winning in 2011. [8] The Japanese national team playing style has been compared to Spain's men's national team of Tiki-taka. [9] 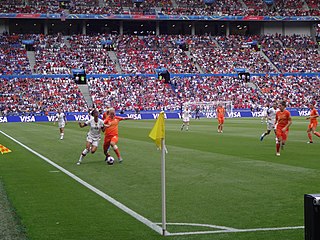 Women's association football, usually known as women's football or women's soccer, and colloquially WOSO, is the team sport of association football when played by women's teams only. It is played at the professional level in numerous countries throughout the world and 176 national teams participate internationally. The history of women's football has seen major competitions being launched at both the national and international levels. Women's football has faced many struggles throughout its history. Although its first golden age occurred in the United Kingdom in the early 1920s, with matches attracting large crowds, The Football Association initiated a ban in 1921 in England that disallowed women's football games from taking place on the grounds used by its member clubs. That ban remained in effect until July 1971.

The Spain national football team represents Spain in international men's football competitions since 1920. It is governed by the Royal Spanish Football Federation, the governing body for Football in Spain.

The Brazil women's national football team represents Brazil in international women's football and is run by the Brazilian Football Confederation (CBF). It has participated in eight editions of the FIFA Women's World Cup, finishing as runner-up in 2007, and seven editions of the Copa América Femenina. 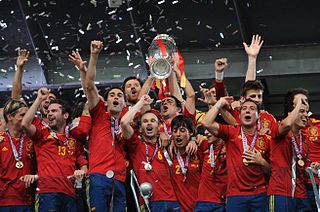 Tiki-taka or Tiqui-taca is a Spanish style of play in football characterised by short passing and movement, working the ball through various channels, and maintaining possession. The style is primarily associated with Spain national team since 2006 by the managers Luis Aragonés and Vicente del Bosque. Tiki-taka methods were eventually embraced by the La Liga club Barcelona from 2009, especially during the era of manager Pep Guardiola; however, Guardiola distanced himself and the club from the style: "I loathe all that passing for the sake of it", stating, "Barça didn't do tiki-taka!", adding, "You have to pass the ball with a clear intention, with the aim of making it into the opposition's goal". Its development and influence goes back to Johan Cruyff's tenure as manager in the early 1990s all the way to the present. Considered the first goal with this game system, the one scored in the qualifying match for UEFA Euro 2008, played in Aarhus (Denmark) at October 13, 2007, by Sergio Ramos.

Aya Sameshima is a Japanese footballer. Primarily a left back, she currently plays for Omiya Ardija Ventus in the WE League and has over 100 caps for the Japan national team. 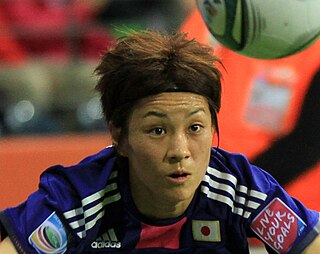 Yukari Kinga is a Japanese football player. She is currently playing as a defender for Sanfrecce Hiroshima Regina in the WE League. She played for Japan national team.

Nahomi Kawasumi is a Japanese footballer who plays for INAC Kobe Leonessa in the Nadeshiko League on loan from NJ/NY Gotham FC. A full international since 2008, she won gold at the 2011 World Cup as well as silver at the 2012 London Olympics and 2015 World Cup. During the 2011 World Cup, she scored two goals—including a lob at 35 yards away against Sweden during the semifinals—helping Japan eventually win the tournament for the first time in its history.

Beverly "Bev" June Yanez, née Beverly June Goebel, is an American former professional soccer forward and midfielder who last played for Reign FC in the National Women's Soccer League (NWSL). She previously played for Melbourne City in the W-League, INAC Kobe Leonessa in the Japanese Nadeshiko.League, PK-35 in Finland's Naisten Liiga, as well as the Western New York Flash and the Washington Freedom in the WPS.

Carolina Conceição Martins Pereira, commonly known as Carol Carioca, is a Brazilian footballer who plays as a centre back for Série A2 club Foz Cataratas FC.

Ana Cristina da Silva, commonly known as Cris, is a Brazilian footballer who plays for São Paulo FC as a midfielder.

Fuka Nagano is a Japanese footballer who plays as a midfielder for Mynavi Sendai playing in the WE League. In 2017, she was named Asian Young Footballer of the Year at the AFC Annual Awards.

Women's association football is a largely amateur sport in Italy, given the greater emphasis of the male competitions.