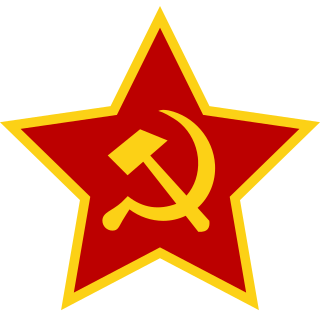 The Workers' and Peasants' Red Army, frequently shortened to Red Army, was the army and the air force of the Russian Soviet Federative Socialist Republic and, after 1922, the Union of Soviet Socialist Republics. The army was established immediately after the 1917 October Revolution. The Bolsheviks raised an army to oppose the military confederations of their adversaries during the Russian Civil War. Beginning in February 1946, the Red Army, along with the Soviet Navy, embodied the main component of the Soviet Armed Forces; taking the official name of "Soviet Army", until its dissolution in December 1991. The former official name Red Army continued to be used as a nickname by both sides throughout the Cold War.

Kharkiv, also known as Kharkov, is the second-largest city in Ukraine. In the northeast of the country, it is the largest city of the Slobozhanshchyna historical region. Kharkiv is the administrative centre of Kharkiv Oblast and of the surrounding Kharkiv Raion, though administratively it is incorporated as a city of oblast significance and does not belong to the raion. Population: 2,139,036

The Army's commander in 1941 was General-Lieutenant Andrew Kirilovych Smirnov. The Army composition on the beginning of the war was:

The 17th Rifle Corps was a corps of the Red Army and later the Soviet Army, formed three times.

It was caught soon after the start of Operation Barbarossa in 1941 in a huge encirclement south of Kiev along with the 6th Army and 12th Armies. This encirclement was part of the Battle of Uman. A further formation was shattered during the Battle of the Sea of Azov in September–October 1941.

Operation Barbarossa was the code name for the Axis invasion of the Soviet Union, which started on Sunday, 22 June 1941, during World War II. The operation stemmed from Nazi Germany's ideological aim of conquering the western Soviet Union so that it could be repopulated by Germans, and to also use some Slavs as a slave labour force for the Axis war effort and to annihilate the rest according to Generalplan Ost, and to acquire the oil reserves of the Caucasus and the agricultural resources of Soviet territories. 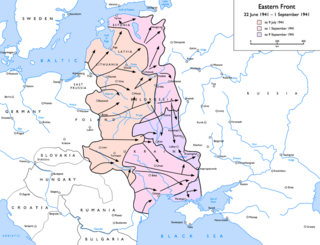 The Battle of Uman was the German offensive operation against the 6th and 12th Soviet Armies — under the command of Lieutenant General I. N. Muzychenko and Major General P. G. Ponedelin, respectively. The battle occurred during the Kiev defensive operation between the elements of the Red Army's Southwestern Front, retreating from the Lwow salient, and German Army Group South commanded by Field Marshal Gerd von Rundstedt, as part of Operation Barbarossa on the Eastern Front during World War II. The Soviet forces were under overall command of the Southwestern Direction, commanded by Marshal Semyon Budyonny, which included the Southwestern Front commanded by Colonel General Mikhail Kirponos and Southern Front commanded by General Ivan Tyulenev. The battle finished by the encirclement and annihilation of 6th and 12th armies to the southeast of the Uman city.

The 89th Infantry Rifle Division, or the Tamanyan Division, was a distinguished division in the Soviet Red Army during the Second World War. The division was primarily remembered for its second formation, composed primarily of ethnic Armenians and fought in numerous battles during the war.

The 318th Rifle Division began forming on June 15, 1942, in and near Novorossiysk on the coast of the Black Sea, as a standard Red Army rifle division; it was later re-formed as a mountain rifle division, but exactly when this happened is disputed among the various sources. It fought in the area it was formed in until September, 1943, and was granted the name of this city as an honorific. In November of that year it took part in the largest Soviet amphibious operation of the war, across the Kerch Straits into the easternmost part of the Crimea, but its small beachhead was eliminated some weeks later. After the Crimea was liberated in May, 1944, it remained there for several months before it was transferred to the Carpathian Mountains west of Ukraine as a mountain division, and spent the remainder of the war fighting through Czechoslovakia in the direction of Prague. The division continued to serve postwar in this same role, but was converted back to a standard rifle division before it was disbanded in the early 1950s.

As part of Southern, North-Caucasian, Transcaucasian Front, and the 1st and 4th Ukrainian Fronts the 18th Army conducted defensive operations in right-bank Ukraine, participated in Donbass, the Rostov defensive and offensive operations, and in the fight for Caucasus. Based on the experience of the Kerch - Eltigen landing operation, the Army was uniquely identified as 18th Desant Army (Russian : 18-я десантная армия) for amphibious operations, between 15 February and 5 April 1944 around Malaya Zemlya.

For this operation the Army included: [5]

The Army reverted to its previous designation for the clearing of right-bank Ukraine, Hungary, Poland and Czechoslovakia. For much of this period the 24th Rifle Division served with 18th Army, and the Division was still serving with the Army in May 1945, along with the 17th Rifle Corps (8th and 138th Rifle Divisions) and a Fortified Region. [6]

After World War II, the 18th Army was transformed into a Mountain Army in the territory of the Carpathian Military District and Northern Bukovina. This army was disbanded in May 1946. Some of its elements, along with parts of the 52nd Army were used to form the 8th Mechanised Army.

A tank corps was a Soviet armoured formation used during World War II.

A mechanised corps was a Soviet armoured formation used prior to the beginning of World War II.

The 6th Army was a field army of the Soviet Red Army formed four times during World War II and active with the Russian Ground Forces until 1998. It appears to have been reformed in 2010.

The 35th Combined Arms Red Banner Army is a field army of the Russian Ground Forces. The army was first formed in July 1941 with the Far Eastern Front. After spending most of World War II guarding the border in Primorsky Krai, the army fought in the Soviet invasion of Manchuria in August 1945, and was disbanded shortly after the end of the war. Reformed at Belogorsk when Sino-Soviet tensions rose in the late 1960s in the Far East, the army became part of the Eastern Military District in 2010. 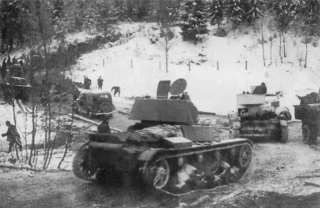 The 7th Army was a Soviet Red Army field army during World War II, primarily against Finland. It was disbanded in 1944. It first saw action in the 1939–40 Winter War against Finland. In November 1939, just before the initial Soviet attack, it consisted of the 19th Rifle Corps, 50th Rifle Corps, 10th Tank Corps, 138th Rifle Division, and an independent tank brigade.

The Soviet Red Army's 29th Army was a field army of the Red Army and later the Russian Ground Forces.

The 13th Army was a name given to several field armies of the Soviet Union's Red Army, first created during the Russian Civil War. Later armies existed until the 1990s, and the army survived as part of the Ukrainian Ground Forces for some years. 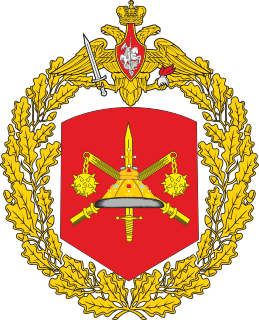 The 20th Guards Combined Arms Army is a field army. In 1991, after the dissolution of the Soviet Union, the army became part of the Russian Ground Forces.

The 21st Guards Motor Rifle Division was a unit of the Russian Ground Forces, within the Far East Military District, formed from the Red Army 31st Guards Rifle Division, an infantry division of World War II which subsequently became a motor-rifle, a tank division and then back to a motor-rifle division. The division appears to have been disbanded, probably in 2009. At least one of its regiments became a separate motor rifle brigade.

The 22nd Army was a field army of the Red Army during World War II.

The 28th Army was a field army of the Red Army and the Soviet Ground Forces, formed three times in 1941–42 and active during the postwar period for many years in the Belorussian Military District.

The 70th Army was a Soviet field army during World War II. It was the highest-numbered combined arms army to be formed by the Stavka during the war. It was active at the Battle of Kursk, the Lublin–Brest Offensive, and the Berlin Strategic Offensive, among other actions.

The 5th Mechanised Corps was a mechanised corps of the Red Army, formed on three occasions. It was first formed in 1934 and was converted into the 15th Tank Corps in 1938. It was reformed in the Far East in 1940 and moved west before the German invasion of the Soviet Union. It fought in the First Battle of Smolensk, losing large numbers of tanks in the Lepel counterattack. The corps was encircled in the Smolensk pocket and after breaking out was disbanded in late August 1941. Its third formation, from elements of the 22nd Tank Corps, occurred in September 1942. The corps fought in: Operation Little Saturn, Operation Gallop, the Second Battle of Smolensk, the Dnieper–Carpathian Offensive, and the Jassy–Kishinev Offensive. In September 1944, it became the 9th Guards Mechanised Corps.

The 55th Army was a field army of the Red Army during World War II. It was part of the Leningrad Front and was formed on 1 September 1941. The army fought in the Sinyavino Offensive, Lyuban Offensive Operation and the Battle of Krasny Bor. On 25 December 1943, it was combined with the 67th Army.