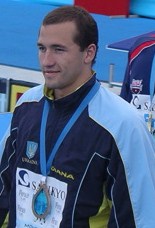 Andriy Serdinov is a Ukrainian swimmer, who competed in the 2000 Olympics, 2004 Olympics and the 2008 Olympics. Serdinov also won the bronze medal in the 100 m butterfly at the 2004 Summer Olympics. 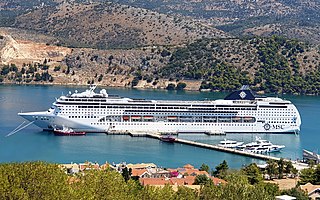 MSC Lirica is the lead ship in her class of cruise ship, owned and operated by MSC Cruises. She was the first newbuild cruise ship to enter service for MSC Cruises. She can accommodate 1,560 passengers in 780 cabins. Her crew complement is approximately 732.

Tennis events were contested at the 1961 Summer Universiade in Sofia, Bulgaria.

Water polo events were contested at the 1961 Summer Universiade in Sofia, Bulgaria.

Volleyball events were contested at the 1961 Summer Universiade in Sofia, Bulgaria.

Fencing events were contested at the 1961 Summer Universiade in Sofia, Bulgaria.

Georgios Tsakanikas was a Greek shot putter and discus thrower. He was named the 1961 Greek Athlete of the Year.

Yekta Yılmaz Gül is a Turkish professional Greco-Roman wrestler, who competed for the men's 120 kg division. He is a member of the İstanbul Büyükşehir Belediyesi S.K.. Gül studied at Niğde University.

Canada participated at the 2017 Summer Universiade, in Taipei, Taiwan.

Bulgaria participated at the 2017 Summer Universiade, in Taipei, Taiwan with 10 competitors in 5 sports.

Christopher Martin Davis is a competitive ice dancer for Bulgaria. With partner Mina Zdravkova, he is the 2020 Bulgarian Ice Dance Champion, Silver Medallist at 2020 Jégvirág Cup, Bronze Medallist at 2019 NRW Trophy, and the Bulgarian representative at the 2020 European Figure Skating Championships and 2021 World Figure Skating Championships. Originally a U.S. citizen, Davis became a naturalized Bulgarian citizen in 2019 and has demonstrated his knowledge of the Bulgarian language in television interviews.