"1984" is an episode of the American television series Westinghouse Studio One broadcast September 21, 1953, on CBS. Starring Eddie Albert, Norma Crane and Lorne Greene, it was the first adaptation of George Orwell's 1949 novel Nineteen Eighty-Four . [1]

The adaptation was written by William Templeton, directed by Paul Nickell, and produced by Felix Jackson for the CBS Westinghouse Studio One series. Music was by Alfredo Antonini and the title drawing was by Dong Kingman. Broadcast on September 21, 1953, it was the first screen adaptation of the novel. Running to just under 50 minutes, it is a much-shortened version of the novel's narrative, with some changes, such as the character of Emmanuel Goldstein being changed to "Cassandra". Templeton co-wrote the 1956 film version, in which the character was similarly renamed as "Cellador". An uncredited Martin Landau is very briefly glimpsed in one scene. [2]

In 2008, Koch Vision released the Studio One Anthology, containing "1984" and 16 other episodes from the series, as well as an interview with director Paul Nickell. 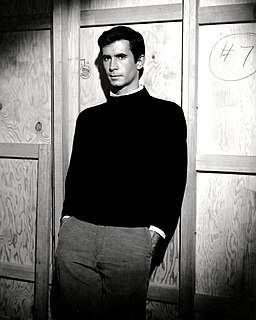 Norman Bates is a fictional character created by American author Robert Bloch as the main antagonist in his 1959 thriller novel Psycho, as the serial killer Mother, embodied by a split personality tulpa presenting as his mother Norma Bates. He was portrayed by Anthony Perkins in the 1960 version of Psycho directed by Alfred Hitchcock and in the Psycho franchise. He was also portrayed by Vince Vaughn in the 1998 version of Psycho, and by Freddie Highmore in the television series Bates Motel (2013–2017). 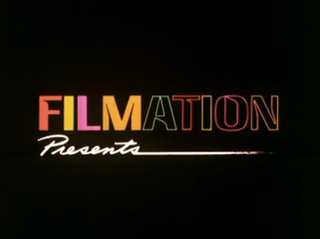 Filmation Associates was an American production company that produced animation and live-action programming for television from 1963. Located in Reseda, California, the animation studio was founded in 1962. Filmation's founders and principal producers were Lou Scheimer, Hal Sutherland, and Norm Prescott. 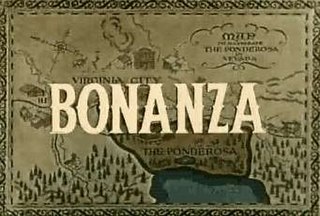 Bonanza was an American Western television series that ran on NBC from September 12, 1959, to January 16, 1973. Lasting 14 seasons and 431 episodes, Bonanza is NBC's longest-running western, and ranks overall as the second-longest-running western series on U.S. network television, and within the top 10 longest-running, live-action American series. The show continues to air in syndication. The show is set in the 1860s and it centers on the wealthy Cartwright family who live in the vicinity of Virginia City, Nevada, bordering Lake Tahoe. The series initially starred Lorne Greene, Pernell Roberts, Dan Blocker and Michael Landon and later featured Guy Williams, David Canary, Mitch Vogel and Tim Matheson. The show is known for presenting pressing moral dilemmas.

Lorne Hyman Greene was a Canadian actor, radio personality, and singer. His notable television roles include Ben Cartwright on the Western Bonanza, and Commander Adama in the original science-fiction television series Battlestar Galactica and Galactica 1980. He also worked on the Canadian television nature documentary series Lorne Greene's New Wilderness, and in television commercials. 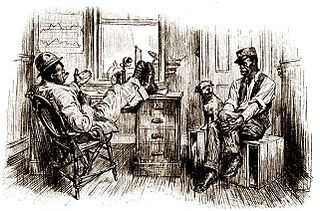 Amos 'n' Andy is an American radio sitcom about black characters, initially set in Chicago and later in the Harlem section of New York City. While the show had a brief life on 1950s television with black actors, the 1928 to 1960 radio show was created, written and voiced by two white actors, Freeman Gosden and Charles Correll, who played Amos Jones (Gosden) and Andrew Hogg Brown (Correll), as well as incidental characters. On television, 1951-1953, black actors took over the majority of the roles; white characters were infrequent. 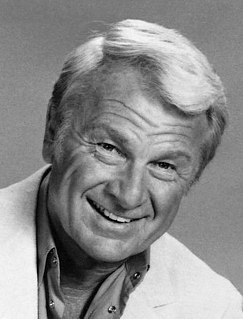 Edward Albert Heimberger was an American actor and activist. He was twice nominated for the Academy Award for Best Supporting Actor; the first nomination came in 1954 for his performance in Roman Holiday, and the second in 1973 for The Heartbreak Kid. Other well-known screen roles of his include Bing Edwards in the Brother Rat films, traveling salesman Ali Hakim in the musical Oklahoma!, and the sadistic prison warden in 1974's The Longest Yard. He starred as Oliver Wendell Douglas in the 1960s television sitcom Green Acres and as Frank MacBride in the 1970s crime drama Switch. He also had a recurring role as Carlton Travis on Falcon Crest, opposite Jane Wyman.

Joseph Flaherty is an American actor, writer, and comedian. He is best known for his work on the Canadian sketch comedy SCTV from 1976 to 1984, and as Harold Weir on Freaks and Geeks, and for his role in Happy Gilmore (1996).

Climax! is an American television anthology series that aired on CBS from 1954 to 1958. The series was hosted by William Lundigan and later co-hosted by Mary Costa. It was one of the few CBS programs of that era to be broadcast in color, using the massive TK-40A color cameras pioneered and manufactured by RCA, and used primarily by CBS' arch-rival network, NBC. Many of the episodes were performed and broadcast live, and although the series was transmitted in color, only black-and-white kinescope copies of some episodes survive to the present day. The series finished at #22 in the Nielsen ratings for the 1955-1956 season and #26 for 1956-1957.

Moby-Dick is an 1851 novel by Herman Melville that describes the voyage of the whaleship Pequod, led by Captain Ahab, who leads his crew on a hunt for the whale Moby Dick. There have been a number of adaptations of Moby-Dick in various media.

Norma Crane was an American actress of stage, film and television best known for her role as Golde in the 1971 film adaptation of Fiddler on the Roof. She also starred in They Call Me Mister Tibbs! and Penelope. Crane was born in New York City but raised in El Paso, Texas.

The Best of Broadway is a 60-minute live television anthology series that aired on CBS Television on Wednesdays at 10 p.m. Eastern Standard Time from September 15, 1954, to May 4, 1955, for a total of nine episodes. Each show was broadcast live in color from New York City, was an adaptation of a famous Broadway play, and included commercials for Westinghouse featuring Betty Furness. Using a "giant new studio," plays were presented in front of a studio audience, which contributed a Broadway-like element. 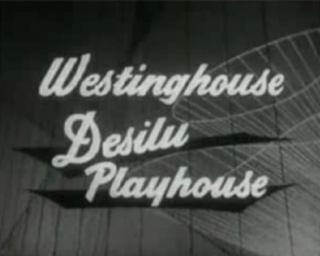 Westinghouse Desilu Playhouse is an American television anthology series produced by Desilu Productions. The show ran on the Columbia Broadcasting System between 1958 and 1960. Three of its 48 episodes served as pilots for the 1950s television series The Twilight Zone and The Untouchables.

"I Need You Now" is a popular song written by Al Jacobs and Jimmie Crane.

William Pettigrew Templeton was a Scottish playwright and screenwriter who made a major contribution to the 'Golden Age of Television' writing a string of episodic dramas for American prime time television during the 1950s and 1960s. Templeton had a long film career both in the UK and the US. 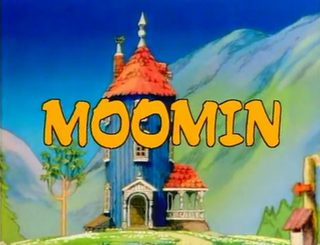 Moomin, also known as Tales From Moominvalley, is a Japanese-Finnish-Dutch anime television series produced by Telecable Benelux B.V.. Based on the Moomin novels and comic strips by the Finnish illustrator and author Tove Jansson and her brother Lars Jansson, it was the third anime adaptation of the property and the first to receive distribution in other countries worldwide. Moomin first aired on TV Tokyo from April 12, 1990, to October 3, 1991. The series had also been dubbed into English and aired on CBBC in United Kingdom during the same year.