Cavasin, a right back, started his professional career in 1973 for Treviso; he then played for a number of Serie A, B and C clubs, with some success. He retired in 1990.

After a few months as Allievi Nazionali coach for Calcio Padova, Cavasin became coach of Treviso for the 1990–91 season, to be sacked soon after. After a number of season at the helm of several Serie C clubs, Cavasin became coach of last-placed Serie B club A.C. Cesena in 1998, as a replacement for Corrado Benedetti, and led the team to keep its place in the league. In 1999, he became coach of U.S. Lecce of Serie A, and led the club to two good seasons, before to be fired in early 2002. He then coached Serie C2 club Florentia Viola (then Fiorentina) in 2002, as replacement for Pietro Vierchowod, to be sacked in 2004. Successively he also coached minor Serie A teams such as Brescia and Treviso with little success.

He became coach of Messina on 30 January 2007, as replacement for Bruno Giordano; he was however sacked about two months later, on 2 April, following a 2–0 defeat to Cagliari. On 22 June 2007, he was announced as the new Frosinone boss, [1] leading them to a mid-table finish in the club's second Serie B campaign. On 5 June 2008 Frosinone announced he had parted company with Alberto Cavasin. [2]

On 20 May 2009, he completed a comeback at Brescia, replacing Nedo Sonetti as head coach for the remaining two games of the 2008–09 Serie B regular season, with the aim to lead the rondinelle into the promotion playoffs. [3] After being sacked by Brescia, on 12 November 2009 he became the manager of AC Bellinzona, a Swiss Super League team. On 2 April 2010 AC Bellinzona fired the Italian trainer, formerly he coaching Lecce, Fiorentina and Brescia. [4]

On 7 March 2011 he was named head coach of UC Sampdoria, replacing Domenico Di Carlo for the remainder of the 2010–11 Serie A and was ultimately relegated to Serie B with the team. [5] In October 2016 he took over at the Football League Two side Leyton Orient. [6] He was dismissed from his role on 23 November 2016 after 10 games in charge with a record of two wins and eight defeats.[ citation needed ]

He returned to work in Italy in December 2017, as head coach of Serie C club Santarcangelo. [7] He was however dismissed in March 2018 due to poor results. [8]

Aimo Stefano Diana is an Italian football manager, currently for Reggiana, and a former player. A player of wide range, he was capable of playing both as a wide midfielder or as a defender on the right flank. 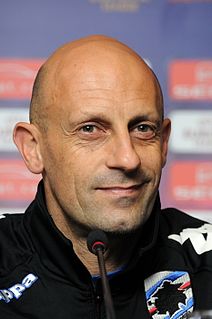 Domenico "Mimmo" Di Carlo is an Italian football coach currently in charge of Vicenza, and a former player.

Marco Giampaolo is an Italian manager, and former professional footballer who played as a midfielder. He was most recently in charge of Torino.

Pasquale Marino is an Italian football manager and former midfielder.

Roberto Stellone is an Italian football manager and former footballer who played as a forward. He is the manager of Arezzo.

Giuseppe "Bepi" Pillon is an Italian football manager and former player, currently in charge as the head coach of Serie C club Triestina.

The 2008–09 Serie B season was the seventy-seventh since its establishment. A total of 22 teams will contest the league, 15 of which will be returning from the 2007–08 season, four of which will have been promoted from Serie C1, and three relegated from Serie A.

Piero Braglia is an Italian football manager and former player. He is the manager of Avellino.

The 2009–10 Serie B season is the seventy-eighth edition since its establishment in 1929. Serie B, currently named Serie bwin due to sponsorship reasons, is the second-highest division in the Italian football league system after the Serie A. It is contested by 22 teams and organized by the Lega Calcio.

Marco Baroni is an Italian football manager and former player, who played as a defender. He is currently in charge of Serie B club Lecce.

The 2010–11 Serie A was the 109th season of top-tier Italian football, the 79th in a round-robin tournament, and the 1st since its organization under a league committee separate from Serie B. It began on 28 August 2010 and ended on 22 May 2011. Internazionale were the defending champions.

Franco Lerda is an Italian former football player who played as a forward. He was the head coach of Partizani from June to December.

The 2019–20 Serie A was the 118th season of top-tier Italian football, the 88th in a round-robin tournament, and the 10th since its organization under an own league committee, the Lega Serie A. Juventus were the eight-time defending champions and they successfully defended their title following a 2–0 win against Sampdoria on 26 July 2020.