Thomas Frederick Taylor (born 26 September 1951) is an English football manager and former footballer. As a footballer, he played as a defender. He is the director of football for Histon.

Taylor played for Leyton Orient, helping them to promotion to Division Two, and captained the England youth team. He won 13 caps for the England Under-23 team, but never made a senior appearance.

Taylor joined West Ham United in October 1970 and was a member of the team that won the FA Cup in 1975. In 1977, he played for Team Hawaii of North American Soccer League from May to August of this year on loan from West Ham. [1] He returned to Orient in 1979 after losing his place in the Hammers side to Alvin Martin. He played a total of 396 games and scored eight goals for the Hammers.

Taylor had a spell in Belgium with K Beerschot. [2]

Taylor joined Charlton Athletic as youth coach. He moved into football management in New Zealand for three years, then joined Maidstone United as a coach in 1989.

Taylor became youth team manager at Cambridge United in 1993 and went on to manage the first team in 1995. A year later, he returned to Brisbane Road to manage Leyton Orient.

In 2001, after five years at the club, he left Orient and joined Darlington, leaving in October 2002. Taylor then joined Conference side Farnborough Town, officially taking on the manager's role in May 2003.

In November 2004, Taylor was appointed manager at King's Lynn. In 2006, he joined rivals Peterborough United as assistant to Keith Alexander. At the time of his departure King's Lynn were top of the Southern League. [3] On 15 January 2007, following the departure of Alexander, he was appointed caretaker manager. [4] With the job going to Darren Ferguson five days later, Taylor became number two once again, after overseeing one loss for the club.

In July 2007 he left Peterborough to become manager of Boston United, who had recently been double-relegated from League Two to the Conference North. [5]

Taylor was appointed manager of the Grenada national football team in May 2009. [6] His first game in charge of Grenada was friendly against Panama on 10 June 2009. Taylor contacted Blackburn Rovers'Jason Roberts, Leeds United's Jermaine Beckford and Southampton F.C.'s Bradley Wright-Phillips in the hope of convincing the players to become eligible for Grenada. [7] He led Grenada to their first CONCACAF Cold Cup in 2009. [8]

He joined CD Torrevieja, in Alicante, Spain, as Director of Football, in January 2010 but left three months later.[ citation needed ]

In May 2011 he was appointed as manager of Belper Town. [9] In September of that year Taylor resigned as Belper manager after a poor start to the season which saw them exit the FA Cup to lower level opponents. [10]

In 2013, Taylor was appointed as a manager of PS Kemi Kings who play in the Kakkonen, Finland's third tier. [11]

In June 2019, Taylor was appointed as director of football for Histon. [12]

Leyton Orient Football Club is a professional football club based in London, England, who compete in League Two, the fourth tier of the English football league system. They are the second oldest football club in London to play at a professional level, and are known to their fans by their nickname "the O's". The club's home colours are all red. They have played home matches at Brisbane Road since 1937, having previously played at Millfields and Lea Bridge Road.

Adam Lee Newton is an English-born Saint Kittitian and Nevisian retired footballer who played professionally for West Ham United, Peterborough United, Brentford and Luton Town. He represented England at under-21 level and played for Saint Kitts and Nevis at full international level.

Carl Neil Fletcher is a former professional football player and manager, who most recently was head coach at Leyton Orient. As a midfielder Fletcher represented Wales at senior international level for five years, scoring one goal in 36 appearances.

Martin Ling is an English football manager and former player currently director of football for Leyton Orient. He played in over 100 Football League matches for each of Exeter City, Southend United, Swindon Town and Leyton Orient, before moving into management. He led Orient for more than five years from 2003 until 2009, and went on to manage Cambridge United, Torquay United and Swindon Town.

Grant Samuel McCann is a Northern Irish professional football manager and former player who played as a midfielder in the Football League. He is the manager of League One club Hull City. 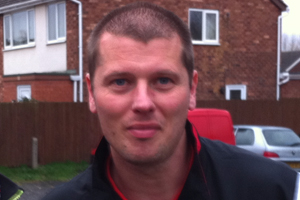 Lee David Harrison is an English goalkeeping coach, currently working at Wycombe Wanderers. Harrison spent most of his career with Barnet, but he has played in over 400 League and Cup games in the course of his career with Gillingham, Fulham, Leyton Orient and Peterborough United.

Omer Karime Ali Riza is a former footballer who is currently a coach at Watford's academy.

Edward Lewis was an English footballer who played as a centre-forward and later as a full-back. Born in Manchester, he played for Goslings before joining the now-famous Manchester United Junior Athletic Club (MUJAC). He made his debut for Manchester United in 1952, but struggled to nail down a regular place in the starting XI and was sold to Preston North End in 1955. 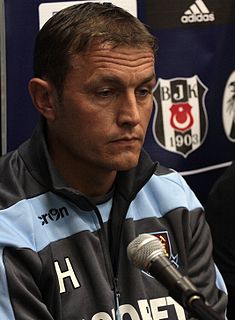 Roger George Cross is an English former professional footballer who played as a forward.

Andrew David Edwards is an English former professional footballer and manager, now working as a coach with the Football Association.

Pasquale "Lil" Fuccillo is a former footballer and manager. He is currently the chief scout at Crawley Town.

Miguel Juan I. de Souza is an English footballer. Began his career as a youth player with West Ham Utd as a 14 year old, where he remained for a year before signing schoolboy forms with Brighton and Hove Albion. He wasn't offered a scholarship and consequently left football for a couple of years before joining Clapton FC. He progressed through the ranks at The Old Spotted Dog Ground before moving to Charlton Athletic in the first division signing professional forms for one year. He played as a right back and right midfielder. Failing to secure a first team place he joined Bristol City, where he remained on a month to month contract for several months before signing for Conference side Yeovil Town. After 18 months he returned to london and joined Dagenham & Redbridge, where Reserve team manager Ted Hardy converted him to a Striker. A year season later Miguel broke into the first team scoring 15 goals before being signed by Barry Fry to then Championship side Birmingham City. He played as a right sided midfield player, occasionally playing as a striker in the first team. He had successful spells at both Wycombe Wanderers and Peterborough United, before joining two other Conference outfits Rushden & Diamonds and Boston United. Appointed player/coach of St Albans City in May 2004.

Nathaniel Lawrence Knight-Percival is an English professional footballer who plays as a defender for Morecambe. 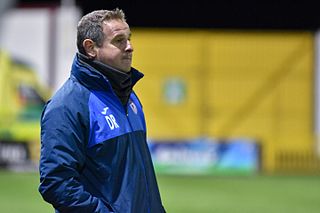 Dave Robertson is a football manager and coach who was most recently the manager of League of Ireland Premier Division side Sligo Rovers until April 2017. Before this he was manager of Peterborough United.

The 2015–16 season will be Peterborough United's 56th year in the Football League and their third consecutive season in the third tier, League One. Along with League One, the club will also compete in the FA Cup, League Cup and Football League Trophy. The season covers the period from 1 July 2015 to 30 June 2016.