His son Lee is the head coach of Sunderland.

Johnson signed for Watford as an apprentice at sixteen and turned professional at the age of eighteen. He then left Vicarage Road and moved to play football in Sweden for Malmö FF. [2] After building up a successful football holiday business, Johnson then returned to England and played part-time football for Soham Town Rangers, Newmarket Town and Cambridge United.

After his playing career ended, Johnson spent the next six years training to earn his coaching badges and took his first managerial job at Newmarket Town in 1986.

Johnson was the manager at Newmarket Town, when he was persuaded to join Cambridge United as reserve team manager in 1988. Appointed as assistant manager in 1990, Johnson helped John Beck organise the U's remarkable rise in the early 1990s, in which they came within two matches of becoming the first club to rise from the old Fourth Division to the top flight in successive seasons (Northampton Town having spent two seasons in both the third and second divisions before promotion to the first division in 1966). Johnson was briefly caretaker manager in late 1992 and then took charge from 1993 until 1995. Under Johnson's stewardship, the U's were contenders for a play-off place in Division Two in 1993–94, before eventually finishing tenth. The following season, many players were sold to balance the books and Johnson moved to take over at Kettering Town.

After leaving Cambridge, Johnson took over as manager of Kettering Town as the club introduced full-time football for the first time in the club's history. However, once the decision was made to revert to being a part-time club, Johnson moved to Watford as director of their youth academy by request of former England manager Graham Taylor.

He was approached by the Latvian football authorities for help, and became coach of their national team for two years from 1999 to 2001.

Whilst coaching Latvia, he spotted the potential of Marians Pahars and recommended him to Southampton's manager Dave Jones, who invited Pahars for a trial before signing him in March 1999. He also recommended Igors Stepanovs to Arsenal manager Arsène Wenger. [ citation needed ]

Johnson left the job after Latvia drew 1–1 with San Marino. He then returned to England and eventually took over as manager of non-league side Yeovil Town.

In his first year in charge at Huish Park, the Glovers won the FA Trophy by beating Stevenage 2–0 in the final at Villa Park as well as finishing third in the Football Conference; the following year they won the greater prize of the Conference championship by a record margin of seventeen points and topping the hundred goals mark too, winning promotion to the Football League. Yeovil were immediately contenders in the League and after their debut season ended by missing out on the playoffs by goal difference, they were Division Three champions at the second attempt, scoring ninety goals in the process.

During a League Cup game against Plymouth Argyle, Johnson's son (Lee Johnson) accidentally scored a goal after attempting to play the ball back to Argyle's keeper (who had kicked the ball out because of an injury to a Plymouth player). In a show of good sportsmanship Gary Johnson told his players to allow Argyle to walk the ball into the net to level the score at 1–1, avoiding controversy. Yeovil went on to win the game 3–2, with Lee Johnson scoring a hat-trick.

Despite turning down an approach from Derby County in the summer of 2005, Johnson became Bristol City's target when their manager Brian Tinnion resigned that September. Yeovil agreed compensation terms and he became City's manager on 26 September 2005. Despite their lowly position of 22nd in the table, City's fortunes turned around under Johnson and a great run of form in the second half of the season saw them in play-off contention, eventually finishing ninth after a run of 55 points from 36 games.

Johnson won the League One Manager of the Month award for April 2006. After an impressive 2006–07 season (including an 18 match unbeaten run), Johnson won the award again in March 2007 after successfully guiding his side to 16 points from seven games the previous month. This had set Bristol City in a good spot to contend for automatic promotion, which they sealed on 5 May 2007 with a 3–1 home win over Rotherham on the last day of the season.

On 6 September 2007, Gary Johnson and assistant Keith Millen both signed 2+1⁄2-year contract extensions keeping them at the club until 2010.

In the 2007–08 season, he kept Bristol City in the top six of the Championship for almost the entire season and in the top two for a long time; the team were the surprise package of the season. Bristol City eventually lost the play-off final to Hull City at Wembley and were not promoted to the Premiership. Johnson made his players stay on the pitch after the match and watch the Hull City players celebrate as a motivational experience for the next campaign.

In the summer before the 2008–09 season, he broke the club record for a transfer fee in signing 21-year-old Nicky Maynard from Crewe Alexandra for £2.25 million.

Bristol City's once-famous chant of 'Johnson says bounce around the ground' was inspired by Gary Johnson who was quoted to saying in an interview before a league game that he wanted the fans bouncing around.

In September 2008, Johnson signed a new five-year contract with Bristol City, to keep him at the club until 2013. [3] The club ended the season with another top ten finish and on 18 March 2010, with the club comfortably in mid table, the club issued a statement that Johnson had "left his post as manager of Bristol City by mutual consent". [4] [5]

He was appointed manager of Peterborough United on a two-year contract on 6 April 2010. [6] With the club lying outside the playoff positions, Johnson left Peterborough on 10 January 2011. [7] The reasons are that the manager and the chairman could not agree future policy. [8]

On 4 March 2011, Johnson was announced as the new manager of Northampton Town signing on a 2+1⁄2-year deal. [9] His first season in charge almost saw the club relegated from the Football League. At the time of Johnson's appointment Northampton had only lost one of their previous seven games, but a disastrous run, in which the club went eleven games without a win, saw them slip down the table. Under Johnson they had only managed to pick up six points, and it was only by beating Stevenage in the penultimate game of the season that they secured their survival. [10] Northampton Town and Johnson parted company by mutual consent on 14 November, the team having secured just four wins in the new campaign. [11]

On 9 January 2012, Johnson returned to former club Yeovil Town, replacing Terry Skiverton who became Johnson's assistant. [12] The Glovers, with Johnson at the helm, produced an impressive run of form with thirty points in nineteen games to reach safety with two games still left to play.

The 2012–13 season started well for Johnson at Yeovil where in early September, his side remained unbeaten in League One after four games and were top of the table as well as progressing in the Football League Trophy and narrowly losing 4–2 to West Bromwich Albion in the Football League Cup in the second round. There then followed six successive league defeats before the manager turned things round.

On 29 December 2012, Yeovil Town beat Portsmouth 2–1 at Fratton Park which was the start of a run of eight consecutive League One wins, a club Football League record. Johnson was nominated for the January Manager of the Month award but missed out with Dean Smith of Walsall the eventual winner.

On 4 February 2015, with Yeovil bottom of the League One table Johnson was relieved of his duties. [14]

On 30 March 2015, Johnson was appointed as manager of League Two side Cheltenham Town, with the club bottom of the table two points from a position of safety. [15] Despite Cheltenham's failure to avoid relegation, Johnson's contract was extended until the end of the 2016–17 season. [16] The next season was a great success as the Robins won the National League championship title and an instant return to the Football League, the first time a relegated team had won the National League title since 1989, and Johnson became only the second manager to win multiple National League titles. [17]

On 21 August 2018, Cheltenham Town announced they had 'parted company' with Johnson four games into the new season. [18]

On 13 September 2018, Johnson was appointed as manager of Torquay United He went on to guide them to the National League South title with three games remaining. [1]

Cheltenham Town Football Club is a professional association football club based in the town of Cheltenham, Gloucestershire, England. From the 2021–22 season, the club will compete in League One, the third tier of the English football league system, after winning the League Two title. Nicknamed the "Robins", they have played at Whaddon Road since 1932. The club contests rivalries with Gloucester City and Forest Green Rovers.

Kelvin Steven Langmead is an English professional footballer who plays for Harrogate Town. He began his career as a striker, but since September 2006 has been employed as a central defender.

Paul John Buckle is an English football manager. He is currently a technical advisor at Hartford Athletic of the USL and technical advisor to Landon Donovan at San Diego Loyal. Prior to this, he coached the U23s for Southampton FC of the Premier League. He has previously been the manager of Torquay United, Bristol Rovers, Luton Town, Cheltenham Town and Sacramento Republic.

Andrew David Williams is an English professional footballer who plays for EFL League One club Cheltenham Town. He plays as either a forward or a winger. 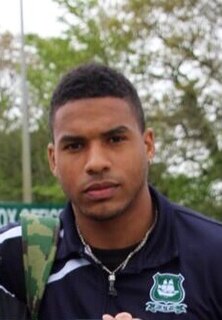 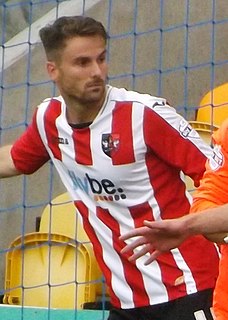 Arron Rhys Davies is a Welsh former professional footballer who played as a midfielder. He made one appearance for the Wales national team.

Jennison Machisti Myrie-Williams is an English footballer who plays as a winger.

Ben Peter Anthony Tozer is an English professional footballer who plays for EFL League One club Cheltenham Town as a defensive midfielder.

John Edward Marquis is an English professional footballer who plays as a centre-forward for League One club Portsmouth.

Samuel Colin Walker is an English professional footballer who plays as a goalkeeper for Kilmarnock.

Joseph Robert Edwards is an English professional footballer who plays for EFL League One side Plymouth Argyle, as a midfielder or as a full-back. 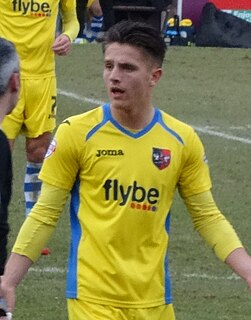 Tom Andrew Nichols is an English professional footballer who plays as a striker for League Two club Crawley Town.

Lawson Marc D'Ath is an English professional footballer who plays as a midfielder most recently for National League club Yeovil Town.

The 2012–13 season was the 10th season in the Football League and the 8th consecutive season at the third tier of English football played by Yeovil Town Football Club, an English football club based in Yeovil, Somerset.

The 2013–14 season was Oxford United's fourth season in League Two after returning from the Conference. They finished 8th in the League, one place better than the previous season but again failing to secure a play-off place after a promising start.

Bill Henry Penna Waters is an English footballer who plays as a forward for National League club FC Halifax Town.