As a player, he was a forward from 1967 to 1987 for Nottingham Forest, Walsall, Birmingham City, Stourbridge and Tamworth. [1] He moved into management and has been in charge of Walsall, Kettering Town, West Bromwich Albion, Lincoln City and Rochdale. He gained renown for his three stints as manager of Grimsby Town between 1988 and 2008, where his achievements have made him the club's most successful manager. Buckley is one of only 14 managers to have reached 1,000 matches in charge of a league club, but the only one of the 14 never to have managed a team in the Premiership or its predecessor, the First Division. [2]

Buckley began his career with Nottingham Forest, but was transferred to Walsall in 1973 having never managed to win a regular place in the first team. He became a prolific striker at Fellows Park, before he was transferred briefly to Birmingham City in October 1978. He returned to Walsall as their record signing (£175,000) in June 1979. [2] He began his managerial career with 'The Saddlers', initially as player/manager and briefly as co-manager with Neil Martin. This was an era that became a hallmark for some of the most attractive football seen in Walsall and the side gradually established itself as promotion contenders. [1]

Buckley gained a favourable reputation during his time in the Black Country, scoring against Manchester United as a player during an FA Cup upset in January 1975, and leading his Walsall side as a manager to victories against the likes of Arsenal, and a draw at Anfield during a League Cup run which took them to the semi-finals, just '90 Minutes From Europe'. He was sacked in August 1986, when Terry Ramsden bought the club, installing his own managerial team within 90 minutes of the takeover deal being completed. [3]

Alan Buckley is still regarded very highly at Walsall; promotion in his first season as manager and in 1984 taking the European Champions Liverpool all the way in a League Cup semi final after drawing at Anfield 2-2. Walsall were the better team but poor finishing and bad luck at home meant Liverpool won 2–0 with their only shots after which Graeme Souness said he would rather play against Juventus than Walsall as they totally "outplayed us" at times after the match.

He joined Tamworth as a player in October 1986, playing a total of five games for the club, [4] three in the West Midlands Premier League, with a debut in the 2–0 victory at Tividale on 4 October 1986. [5]

Later as a manager, after a spell with non-league Kettering Town, he guided Grimsby Town to promotion from the Fourth Division in 1990 and they reached the Second Division a year later [6] – where they spent all but one of the next 12 seasons. In his first two spells at the club, Buckley's Grimsby sides were renowned for their attractive passing game and mounted periodic challenges for the play-offs. Buckley remained at Blundell Park until the autumn of 1994 when he joined Grimsby's Division One rivals West Bromwich Albion. [6] His spell at the Hawthorns lasted two-and-a-half years before he was sacked for failing to get Albion anywhere near a promotion challenge.

A few months after being sacked by Albion, Buckley returned to Grimsby in summer 1997 for his second spell as manager. Town had just been relegated to Division Two, but he took them back to Division One at the first time of asking with two Wembley visits in 1998. Buckley remained in charge for two full seasons after that, but was dismissed after just two games of 2000–01. A couple of brief, short-lived spells in Division Three followed – first with Lincoln City, arriving at Sincil Bank in January 2001. [7] Buckley left the Imps in April 2002, with the club stating that financial reasons were behind his departure. [8] He then took charge of Rochdale in June 2003, [9] but left by mutual consent in December of the same year after failing to revive the club's fortunes. [10] On 9 November 2006 Buckley was appointed manager of Grimsby for a third time. [11]

In his first season back with Grimsby, a mid-table finish was considered a creditable achievement after relegation from the Football League had looked a distinct possibility. In 2007–08, Grimsby made a slow start but soon picked up. A good run in the Football League Trophy saw The Mariners travel to the new Wembley 10 years after their first visit. However this time Grimsby lost 0–2 to MK Dons. [12] League form suffered terribly afterwards, the season ending with eight straight defeats. After gaining just two points from the opening six games of the 2008–09 season, Buckley was again dismissed as manager. [13]

In his three stints as Grimsby Town manager—spanning, in total, over 10 years—the club was never relegated and he also guided them to three promotions. Only 14 managers have reached 1,000 matches in charge of a Football League team by 1998 and Buckley is one of them. [6]

On 14 June 2012 Buckley returned to Grimsby for a fourth time by joining the coaching staff as the new U17's team manager. [14]

His younger brother Steve played over 300 games as a full-back for Derby County, and well over 100 for Luton Town. His eldest son Simon was contracted to both West Bromwich Albion and Grimsby Town without playing but later played at non-league level for Boston United. His other son Adam did however make just under 50 Football League appearances combined for both Grimsby Town and Lincoln City before going on to feature for a number of clubs at a semi-professional level.

Since his departure from management with Grimsby in 2008, Buckley who continues to live in the area is often the co-commentator and guest pundit for BBC Radio Humberside's coverage of Grimsby Town games. He has continued to work in this role alongside his current management duties of the club's U17 side.

Walsall Football Club is a professional association football club based in the town of Walsall, West Midlands, England. The team competes in EFL League Two, the fourth tier of the English football league system. The club's nickname, "The Saddlers", reflects Walsall's status as a traditional centre for saddle manufacture. Walsall moved into their Bescot Stadium in 1990, having previously played at nearby Fellows Park for almost a century. The team play in a red and white kit and their club crest features a swift. They hold rivalries with nearby Wolverhampton Wanderers and West Bromwich Albion, as well as farther away but more regularly contested rivalries with Coventry City, Shrewsbury Town and Port Vale. 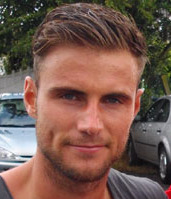 Peter Till is an English semi-professional footballer who plays as a winger for Midland League Premier Division club Walsall Wood. He has played in the Football League for Scunthorpe United, Boston United, Leyton Orient, Grimsby Town, Chesterfield and Walsall.

Anthony Ford is an English former footballer. Through most of his career, Ford was a right-sided midfielder, but in later years, he was converted to right-back. In a career that spanned 27 years, across four decades, Ford played 931 league matches, which is the all-time record for matches played in the English league by an outfield player. He is one of three outfield players in English football to have ever passed 1,000 games in competitive matches, the others being Scott McGleish and Graham Alexander. 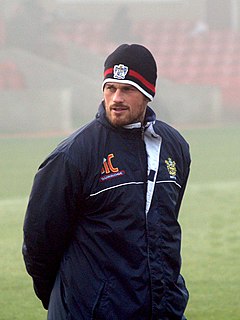 Neil Anthony Cutler is an English former footballer who played as a goalkeeper and is currently goalkeeping coach at Aston Villa.

Darren Wrack is an English former professional footballer who played as a midfielder. He scored 55 goals from 509 league and cup appearances in a 17-year career in the English Football League and Conference.

Paul Anthony Hall is a retired footballer. He is currently an EDS Under 23's Head Coach at Championship club Queens Park Rangers. During his career, Hall was a striker who could also play on the right wing. Born in Manchester, England, he represented Jamaica internationally.

Martin Neil Butler is an English former professional footballer who played as a striker from 1993 until 2009.

David James Gilbert is an English former professional footballer who played as a midfielder from 1981 until 2009. He is currently employed as assistant manager at Lincoln United.

Dean Scott Keates is an English professional football manager and former player who was most recently the manager of National League club Wrexham.

Kevin Donovan is an English former professional footballer and academy coach at Huddersfield Town. He also runs his own soccer academy based at Brighouse Town.

Adam Christian Buckley is an English former professional footballer. He played as a midfielder from 1996 to 2013.

Ian Richard Hamilton is an English former professional footballer who played in the Football League as a midfielder between 1988 and 2002. Hamilton spent four years with Scunthorpe United and six with West Bromwich Albion as well as having shorter spells with Southampton, Cambridge United, Sheffield United, Grimsby Town, Notts County, Lincoln City and Woking.

The 2015/16 season was an eventful one for Walsall. The club had three different managers on the way to a third-place finish in League One, one point away from promotion. Defeat to Barnsley in the playoff semi-finals meant the campaign ended in disappointment, but still represented the Saddlers' highest league placing in 12 years.