Smith was born in Bermondsey, south London. His eldest brother is Richard Smith, a medical doctor, editor and businessman. His younger brother is Nick Smith, a civil servant who for a period of time was also a stand-up comic, but in more recent years has turned to amateur dramatics. Arthur was a student and school captain at The Roan School for Boys, a grammar school, now The John Roan School in Blackheath, London. He then studied at the University of East Anglia where he was chairman of the poetry society, wrote for the student newspaper and contributed sketches for the student revue. He graduated with a 2:1 BA degree in Comparative literature in 1976. [3]

Smith was one of many stand-up performers on the alternative comedy scene in the 1980s, and still performs today in much the same manner. He has regularly attended the Edinburgh Fringe comedy festival since 1977, and still comperes the long-running Hackney Empire New Act of the Year competition final. He has also written a body of serious or semi-serious work, including stage plays such as An Evening with Gary Lineker .

In addition to stand-up comedy, Smith has performed musical comedy shows such as Arthur Smith Sings Leonard Cohen (later broadcast on Radio 4). He returned to this theme for the Edinburgh Fringe in 2013 with "Arthur Smith Sings Leonard Cohen (Volume Too). [4] He is also a radio presenter on such BBC Radio 4 programmes as Excess Baggage and Loose Ends, and appears on television comedy panel games. He took over as narrator of the TV series A Life of Grime after the death of John Peel and was one of the Grumpy Old Men in the television series of that name. Both of the latter two series used "What a Wonderful World" as their theme song. For Grumpy Old Men, Smith was one of the cast members who contributed to a montage rendition of the song.

One of Smith's routines has been set to music by Mark Beazley, aka Rothko, for a CD curated by comedian and writer Stewart Lee. The CD, The Topography of Chance was guest-curated by Stewart for the Sonic Arts Network and Smith's track is called "I've Seen Your Arse" and contained extra vocals by Caroline Quentin taken from a live recording of Smith's show, Arthur Smith's Last Hangover.

In December 1985, Smith, along with temporary comedy partner Phil Nice, made a short series of parody documentaries for Channel 4 television network called Arthur and Phil Go Off. One episode, titled "Nessie – Real or Pretend" about the Loch Ness Monster, was aired in America on the A&E cable channel in 1986. None of these shows has officially been released to any video format.

During the late 1980s, Smith took the role of consumer expert, testing such items as hangover cures and Pot Noodles on the BBC Radio 2 Nightcap show hosted by Peter Dickson.[ citation needed ]

In 1989, Smith provided voices for an Aardman Animations short called Ident with Nice and later. In 1989 he appeared in The Bill ("Quiet Life"). In the mid and late 1990s, he lent his voice to some television animations including the TV short The Animal Train as Jim Jam (with veteran voice actor Rick Jones voicing the character in the US version), the BBC clay animated series Rex the Runt (also made by Aardman) as Arthur Dustcart in five episodes, and the British-French children's animated series Romuald the Reindeer as the big bully Clint.

One of Smith's more unusual roles was in the sitcom Red Dwarf in the episode "Backwards". He plays a bar manager on backwards Earth who has hired Kryten and Rimmer as a forward novelty act. He gave a speech (in reverse) blaming Kryten and Rimmer for starting a fight. If, however, the speech is played forwards, he is heard to be insulting the listener who has flipped the recording over trying to find out what he was saying ("What a poor sad life he's got"). [5]

A night in watching football with Tony Hawks, ended with him challenging Hawks to beat the entire Moldovan football team at tennis. Hawks took him up on this bet, and wrote a book [6] about it. Hawks won the bet, and Smith had to stand on Balham High Road and sing the Moldovan National Anthem whilst naked.

Smith also appeared in a cameo role in the first series of the BBC science fiction radio comedy Married . He played a version of himself from a parallel universe who eked out a living as a children's party entertainer. This role expanded in the second and third series.

In 2006, Smith played "Clarrie" in the Doctor Who audio, The Kingmaker .

He is currently one of the hosts of "The Comedy Club" on BBC Radio 4 Extra and also narrates the BBC series Money for Nothing . [7] He makes a cameo appearance in the music video of the song "Happy Goddamn Christmas", [8] by Loretta Maine and Matt Roper, released on 13 December 2012 via BBC Three.

In August 2016, he appeared in the role of Mr Harman in the revival of the BBC sitcom Are You Being Served . [9]

In 2005, Smith turned down a lifetime achievement award from the Perrier Award organisers. He said that "Comedians rather dislike the Perrier Awards and the public aren't interested. Basically, they wanted to tell me I was old and cool; well, I know that already, and anyway, my ego is bloated enough." [11] In 2007, he went on to win the Panel Prize at the Edinburgh Fringe.

In 2010, he was a Malcolm Hardee Cunning Stunt Award nominee for best publicity stunt at the Edinburgh Fringe, after declaring that he would pay £100 to any journalist attending his show who would juggle fish. [12]

Smith has been a longtime resident of Du Cane Court in Balham, London, and has described himself as the "Night Mayor of Balham – I don't do days". [13] In 2009, he broadcast a comedy series for BBC Radio 4 from his own home called Arthur Smith's Balham Bash .

He is engaged to Beth Kilcoyne, a performer and screenwriter, [1] who is the co-writer of the BBC TV series Roger & Val Have Just Got In .

Smith is a socialist and is a supporter of the Labour Party. [14]

His near-death from pancreatitis made him teetotal, an experience which he turned into a comedy monologue Arthur Smith's Last Hangover. Subsequently, he developed type 2 diabetes but he still smokes.[ citation needed ] 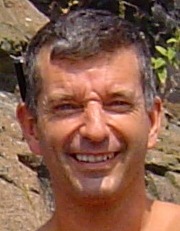 Linda Helen Smith was an English comedian and comedy writer. She appeared regularly on Radio 4 panel games, and was voted "Wittiest Living Person" by listeners in 2002. From 2004 to 2006 she was head of the British Humanist Association. She met her partner, Warren Lakin, at university, and they were together for nearly 30 years until her death.

Simon Munnery, also known as his characters "Alan Parker: Urban Warrior" and "The League Against Tedium", is an English comedian.

Lewis Schaffer is an American comedian, based in Nunhead, south-east London, where he moved in 2000. He currently hosts his own weekly radio show on Resonance FM 104.4FM in London entitled "Nunhead American Radio with Lewis Schaffer" and tours Britain as a stand-up comedian. He was the first comic to tour a "free admission" show across the United Kingdom and in 2015 performed at 47 theatres and art centres in Britain.

Stephen Frederick Eustace Frost is an English actor and comedian.

Edward Cathal Byrne is an Irish stand-up comedian, voice over artist and actor. He has presented television shows Uncut! Best Unseen Ads and Just for Laughs, and is a guest on television panel games.

John Moloney is an English stand-up comedian of Irish descent.

John Dowie is a British comedian, musician and writer. He began performing stand-up comedy in 1969. "Backwards" is the first episode of science fiction sitcom Red Dwarf Series III, and the thirteenth in the series run. It premiered on the British television channel BBC2 on 14 November 1989. Written by Rob Grant and Doug Naylor, and directed by Ed Bye, the episode has the crew travel to an alternate Earth where time runs backwards.

Matt Roper is a British comedian, writer and musician.

Pippa Evans is a British comedian, known for her work in character and improvisational comedy.

Chris England is an English writer and actor. He is best known for the comedy play An Evening with Gary Lineker, which he wrote with Arthur Smith, and the book Balham to Bollywood.

Jason Forbes is a British actor, writer and comedian best known for the CITV series Horrible Science; The Mash Report on BBC Two; as PC Peasey in the Professor Branestawm movies on BBC One; and as a member of the award-winning sketch trio 'Daphne'.