In 2005, Super Saucy was released, preceded by the lead single "Baby, I'm Back" (featuring Akon). Cyclone followed in 2007, with its title single (featuring T-Pain) and its follow-up, "What Is It" (featuring Sean Kingston), finding moderate success on the Billboard charts as well. [5]

He contributed to other performers' works, including the song "Obsession (No Es Amor)" by the 3rd Wish, released in Europe and later a U.S release with a re-recording of the European version, performed by Frankie J in 2005 and "Doing Too Much" by Paula DeAnda in 2006.

He has collaborated with numerous other artists during his career, such as West Coast rappers B-Legit, C-Bo, Coolio, E-40 [6] and Mac Dre, R&B singers like Akon, Avant, Natalie, Bohemia, Mario, and Nate Dogg, [7] and other Latino rappers such as Fat Joe, Nino B, Doll-E Girl, South Park Mexican, Frost, [6] and Pitbull. [8] He continues to write lyrics for singers such as Paula DeAnda, Jennifer Hudson and Frankie J. [9]

Bryant was born in Vallejo, California to a Mexican mother from Mendota, California. Bryant was raised by his grandmother, and Bryant's father and uncles exposed him to many different types of musical genres. Initially, Bryant wanted to be a professional basketball player. [4] He planned to play basketball for the junior college he attended in California during the mid-1990s. An ankle injury prevented Bryant from pursuing basketball as a career.

Bryant's music career began as part of the group Potna Duece in Vallejo, California. He went to Houston in 1998, where he met fellow rapper South Park Mexican. [10] Prior to his success as a solo artist he, under the name "Baby Beesh", was part of rap groups Potna Deuce and Latino Velvet. [11]

The acclaim he received caught the attention of Universal Records, who signed him later that year. In 2003, Baby Bash released his first album on a major label, Tha Smokin' Nephew. It debuted at number 48 on the Billboard 200. Five months after its release, the album was certified Gold by the RIAA. As of March 2005, the album has sold 531,000 copies in the United States. Ménage à Trois is an independent label album (fifth album overall) by Baby Bash.

In 2005, Bash released Super Saucy. Super Saucy is the first official studio album (sixth album overall) by Baby Bash released in March 2005. It spawned the hit single, "Baby I'm Back" (featuring Akon) which reached number 19 on the Billboard Hot 100. It is also his last release on Universal Records before signing with Arista Records. The album debuted at number 11 on the Billboard 200 with 48,000 copies sold in the first week released, becoming Baby Bash's highest-charting album to date.

He was featured on Paula DeAnda's first single "Doin' Too Much", from her debut album Paula DeAnda. His third studio album, Cyclone (initially titled Ronnie Rey All Day), [12] was released in late October 2007. So far, Bryant has released three singles from the album: "Mamacita", featuring Marcos Hernandez, "Na Na", and "Cyclone", featuring Mickaël & T-Pain. During the month of the album's release, Baby Bash became Myspace's #1 Latin artist, [9] and the single "Cyclone" sold over 750,000 digital copies and ringtones prior to the album's release. [9]

Bryant completed a film entitled Primos, starring Chingo Bling and Danny Trejo. The comedy involves three cousins working in a bakery with dreams of making money and was released in 2010. [9] His major-label debut, Tha Smokin' Nephew, was well received by AllMusic, [13] but his 2007 album, Cyclone, was given mixed reviews, including a negative review by Rolling Stone magazine. [14]

Bashtown is the fourth studio album by Bryant. Released on March 22, 2011, it is the first album to be released on Upstairs Records. Bashtown features production from Jim Jonsin, Printz Board, Happy P, Mickaël, J. Lacy, and C-Ballin, and features vocal guests E-40, Paul Wall, Slim Thug, and Lloyd, among others. According to Bryant, the album was recorded in 2010.

In December 2010, Bryant was offered a job as an on-air personality for Wild 94.9, a Rhythmic Contemporary commercial radio station in San Francisco, California. [15] In the same month, Bryant announced that he would be endorsing a new energy drink for women named after his 2011 single "Go Girl". [15] Part of the sales proceeds from the energy drink will be donated to various charities for breast cancer- and ovarian cancer-research for women. [15]

Bryant was arrested with Paul Wall on the night of September 10, 2011, in El Paso, Texas, for possession of marijuana. Both rappers were released the same night on US$300 bail. [16]

On December 17, 2013, Bryant released his eighth studio album, Unsung. The album features artists such as Too Short, Miguel, and Problem. Production credits of the album belong to DJ Rex, Happy Perez, Mickaël, J. Lacy, and C-Ballin. 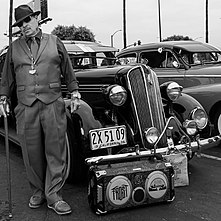 SRC is an American record label created by former Loud Records CEO Steve Rifkind. It was a subsidiary of Universal Music Group and was distributed through Republic Records. 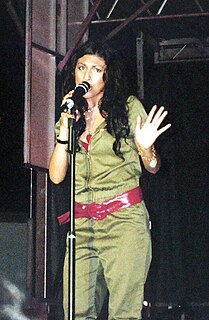 Paula Dacia DeAnda is an American singer and songwriter. She first came to prominence with her first single, "Doing Too Much", which became a hit in the Southwest. She then got the opportunity to audition for Clive Davis, who signed her to Arista Records on the spot. Her debut album, Paula DeAnda, was released in 2006 and contained the US Billboard Hot 100 top twenty song "Walk Away ". 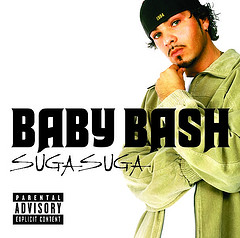 "Suga Suga" is a song by American rapper Baby Bash featuring Frankie J. The song was written by both singers and was released on July 21, 2003, as the second and final single from Baby Bash's third studio album, Tha Smokin' Nephew (2003). It is Baby Bash's highest-charting song on the US Billboard Hot 100, reaching number seven, and it appeared on several international rankings, including the New Zealand Singles Chart, where it peaked at number one. It has received sales certifications in Australia, Germany, New Zealand, and the United States. 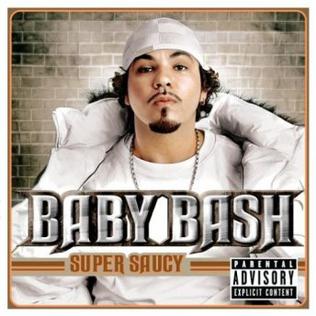 Super Saucy is the second studio album by American hip hop recording artist by Baby Bash. It was released on March 15, 2005, with the record label Universal Records before signing with Arista Records.

Tha Smokin' Nephew is the first major label studio album by the rapper Baby Bash and his third album overall. Released on September 23, 2003 by Universal Records, it entered the Billboard 200 at number 48. Five months after its release, the album was certified Gold by the RIAA. By March 2005, the album had sold 531,000 copies in the United States. 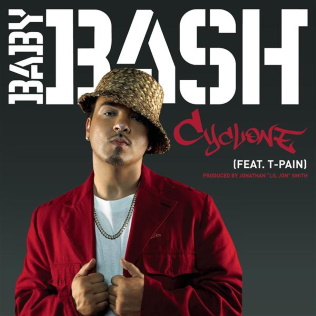 "Cyclone" is the second single by American rapper Baby Bash from his album Cyclone. The song features T-Pain on the last verse and Mickaël Zibi on the intro and chorus though he is only credited on the album. The song was produced by Lil Jon and the song's beat structure incorporates typical Southern hip hop claps and pizzicatos, as well as Lil Jon's signature crunk synths and whistles. The Recording Industry Association of America certified the song as double platinum. The song peaked at number 7 on the Billboard Hot 100. 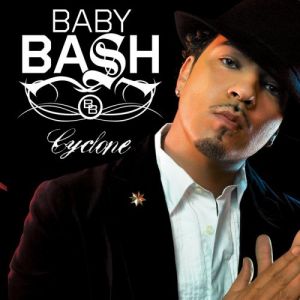 Cyclone is the third studio album and the seventh album overall by the American hip hop recording artist Baby Bash, released by Arista Records on October 30, 2007.

Ménage à Trois is an independent label compilation album released by Baby Bash, his fifth overall release. The album is made up of tracks from 2003's The Ultimate Cartel, 2002's On Tha Cool & 2001's Savage Dreams when Baby Bash was known as Baby Beesh. 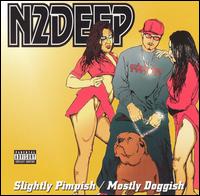 Slightly Pimpish/Mostly Doggish is the fifth studio album and eighth album overall released by N2Deep. Although this album was released under the name N2Deep it is actually a Jay Tee solo album as TL does not participate on this project. The album was released in 2000 for Swerve Records and was produced by Jay Tee, Philly Blunt and Ken Franklin. Latino Velvet, PSD and Mac Dre all make guest appearances on this album.

Steve Davison, better known as PSD, PSD Tha Drivah or Stevie Dee, is a rapper and producer from Vallejo, California, US, who is closely associated with the late Mac Dre.

James Trujillo, better known by his stage name Jay Tee, is a rapper, songwriter and hip hop producer from Vallejo, CA. He has been a part of the city's scene since the early 1990s as the lead member of N2Deep and Latino Velvet along with Baby Beesh. Even though N2Deep's 2000 album Slightly Pimpish/Mostly Doggish was a solo album, it was not until 2001 that Jay Tee released a solo album under his own name, So Cold. 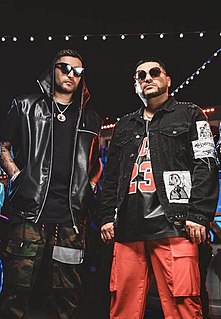 Play-N-Skillz are a Latin/American record production/DJ group duo from Dallas, Texas, consisting of brothers Juan "Play" Salinas and Oscar "Skillz" Salinas. Their production has won several Grammys including the Grammy Award for Best Rap Performance by a Duo or Group in 2007 for their production on the single "Ridin'" by Chamillionaire and Krayzie Bone, and the Grammy Award for Best Rap Album for Lil Wayne's Tha Carter III (2008), which included their production on the single "Got Money". By 2011, the duo brought their music to the EDM scene, and crossed paths with David Guetta, who also saw a similar need. Together, they co-wrote and arranged his music, leading to the hit "Where Them Girls At" featuring Nicki Minaj and Flo Rida. In 2014 Play-N-Skillz connected with Redfoo of the group LMFAO and went on tour with him in Mexico, Australia, Dubai, and South America while working on Redfoo's solo album where they wrote and produced the multi-platinum global hit "New Thang". The duo also releases music through their record deal with Sony Latin Music where they have had a partnership since 2016. In 2019, Play-N-Skillz produced and co-wrote the #1 worldwide diamond single "Con Calma" for Daddy Yankee. A remix version featuring American singer Katy Perry was released on April 19, 2019. The brothers have also expanded their brand into many other business ventures including being named the creative directors at CTM Latin Music Publishing while also gaining a position of ownership in the company. The duo also built their top-of-the-line new music studio in 2020 in Miami, Florida, where they now operate their many partnerships from.

Francisco Soto, better known by his stage name Don Cisco, is an American rapper and producer. 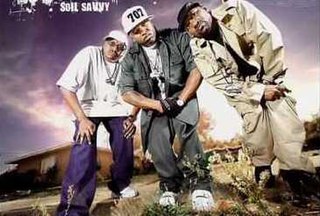 The Mossie was an American rap group from Vallejo, California, with members: Kaveo, Mugzi and Tap Dat Ass. They first appeared together on E-40's 1993 EP, The Mail Man. Before dropping their 1997 debut album, Have Heart Have Money, on Sick Wid It and Jive Records, they appeared together on several other Sick Wid It releases, including: The Hogg in Me, The Hemp Museum and Southwest Riders. 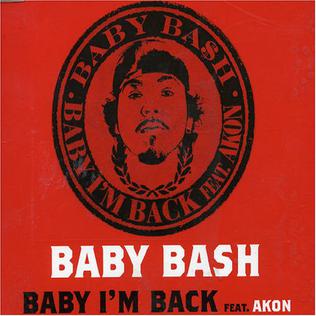 "Baby, I'm Back" is a song by American hip hop singer Baby Bash featuring vocals from Senegalese-American singer Akon. It was released on January 18, 2005, as the first single from Baby Bash's second studio album, Super Saucy (2005). The song was also used to promote the 2005 film The Honeymooners.

This is the discography of American rapper Baby Bash. 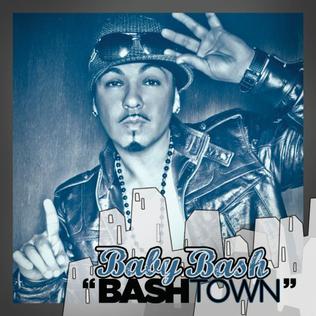 Bashtown is the fourth studio album, and eighth album overall, released by the American hip hop recording artist Baby Bash. Released on March 22, 2011, it is the first of his albums to be released on Upstairs Records. Bashtown was produced by Jim Jonsin, Printz Board, Happy Perez, Mickaël, J. Lacy, & C-Ballin and has vocal guests E-40, Paul Wall, Slim Thug, Jay Rock, Marty James, The Jacka, Z-Ro, Krizz Kaliko, Lucky Luciano and Lloyd among others. According to Baby Bash, the album was recorded entirely in 2010, although many singles and the album were released in 2011.