In mathematics, a topological space

is said to be a Baire space, if for any given countable collection

of closed sets with empty interior in

also has empty interior in

. [1] Equivalently, a locally convex space which is not meagre in itself is called a Baire space. [2] According to Baire category theorem, compact Hausdorff spaces and complete metric spaces are examples of a Baire space. [3] Bourbaki coined the term "Baire space". [4]

In an arbitrary topological space, the class of closed sets with empty interior consists precisely of the boundaries of dense open sets. These sets are, in a certain sense, "negligible". Some examples are finite sets in

The precise definition of a Baire space has undergone slight changes throughout history, mostly due to prevailing needs and viewpoints. A topological space

is called a Baire space if it satisfies any of the following equivalent conditions:

The Baire category theorem gives sufficient conditions for a topological space to be a Baire space. It is an important tool in topology and functional analysis.

BCT1 shows that each of the following is a Baire space:

BCT2 shows that every manifold is a Baire space, even if it is not paracompact, and hence not metrizable. For example, the long line is of second category.

inside of the real line

with the standard euclidean topology. Given an indexing of the rationals by the natural numbers

which is an open, dense subset in

Then, because the intersection of every open set in

is empty, the space

cannot be a Baire space. 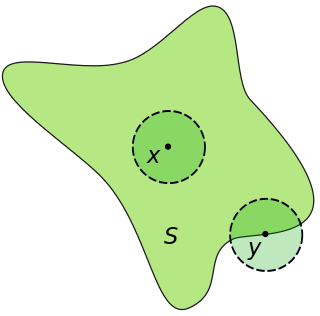 In the mathematical fields of general topology and descriptive set theory, a meagre set is a set that, considered as a subset of a topological space, is in a precise sense small or negligible. A topological space T is called meagre if it is a meager subset of itself; otherwise, it is called nonmeagre.

In the mathematical field of topology, a Gδ set is a subset of a topological space that is a countable intersection of open sets. The notation originated in German with G for Gebiet meaning open set in this case and δ for Durchschnitt. The term inner limiting set is also used. Gδ sets, and their dual, F𝜎 sets, are the second level of the Borel hierarchy.

In mathematics, Baire functions are functions obtained from continuous functions by transfinite iteration of the operation of forming pointwise limits of sequences of functions. They were introduced by René-Louis Baire in 1899. A Baire set is a set whose characteristic function is a Baire function.