In mathematical analysis, a metric space M is called complete (or a Cauchy space) if every Cauchy sequence of points in M has a limit that is also in M.

Intuitively, a space is complete if there are no "points missing" from it (inside or at the boundary). For instance, the set of rational numbers is not complete, because e.g.

is "missing" from it, even though one can construct a Cauchy sequence of rational numbers that converges to it (see further examples below). It is always possible to "fill all the holes", leading to the completion of a given space, as explained below.

Definition: A sequence x1, x2, x3, ... in a metric space (X, d) is called Cauchy if for every positive real number r > 0 there is a positive integer N such that for all positive integers m, n > N,

Definition: [1] The expansion constant of a metric space is the infimum of all constants

such that whenever the family

Definition: A metric space (X, d) is complete if any of the following equivalent conditions are satisfied:

The space Q of rational numbers, with the standard metric given by the absolute value of the difference, is not complete. Consider for instance the sequence defined by x1 = 1 and

This is a Cauchy sequence of rational numbers, but it does not converge towards any rational limit: If the sequence did have a limit x, then by solving

necessarily x2 = 2, yet no rational number has this property. However, considered as a sequence of real numbers, it does converge to the irrational number

The space R of real numbers and the space C of complex numbers (with the metric given by the absolute value) are complete, and so is Euclidean space Rn, with the usual distance metric. In contrast, infinite-dimensional normed vector spaces may or may not be complete; those that are complete are Banach spaces. The space C[a, b] of continuous real-valued functions on a closed and bounded interval is a Banach space, and so a complete metric space, with respect to the supremum norm. However, the supremum norm does not give a norm on the space C(a, b) of continuous functions on (a, b), for it may contain unbounded functions. Instead, with the topology of compact convergence, C(a, b) can be given the structure of a Fréchet space: a locally convex topological vector space whose topology can be induced by a complete translation-invariant metric.

If S is an arbitrary set, then the set SN of all sequences in S becomes a complete metric space if we define the distance between the sequences (xn) and (yn) to be 1/N, where N is the smallest index for which xN is distinct from yN, or 0 if there is no such index. This space is homeomorphic to the product of a countable number of copies of the discrete space S.

Riemannian manifolds which are complete are called geodesic manifolds; completeness follows from the Hopf–Rinow theorem.

If X is a topological space and M is a complete metric space, then the set Cb(X, M) consisting of all continuous bounded functions f from X to M is a closed subspace of B(X, M) and hence also complete.

The Baire category theorem says that every complete metric space is a Baire space. That is, the union of countably many nowhere dense subsets of the space has empty interior.

(This limit exists because the real numbers are complete.) This is only a pseudometric, not yet a metric, since two different Cauchy sequences may have the distance 0. But "having distance 0" is an equivalence relation on the set of all Cauchy sequences, and the set of equivalence classes is a metric space, the completion of M. The original space is embedded in this space via the identification of an element x of M' with the equivalence class of sequences in M converging to x (i.e., the equivalence class containing the sequence with constant value x). This defines an isometry onto a dense subspace, as required. Notice, however, that this construction makes explicit use of the completeness of the real numbers, so completion of the rational numbers needs a slightly different treatment.

For a prime p, the p-adic numbers arise by completing the rational numbers with respect to a different metric.

Completeness is a property of the metric and not of the topology , meaning that a complete metric space can be homeomorphic to a non-complete one. An example is given by the real numbers, which are complete but homeomorphic to the open interval (0,1), which is not complete.

In topology one considers completely metrizable spaces , spaces for which there exists at least one complete metric inducing the given topology. Completely metrizable spaces can be characterized as those spaces that can be written as an intersection of countably many open subsets of some complete metric space. Since the conclusion of the Baire category theorem is purely topological, it applies to these spaces as well.

A topological space homeomorphic to a separable complete metric space is called a Polish space.

Since Cauchy sequences can also be defined in general topological groups, an alternative to relying on a metric structure for defining completeness and constructing the completion of a space is to use a group structure. This is most often seen in the context of topological vector spaces, but requires only the existence of a continuous "subtraction" operation. In this setting, the distance between two points x and y is gauged not by a real number ε via the metric d in the comparison d(x, y) < ε, but by an open neighbourhood N of 0 via subtraction in the comparison x − y ∈ N.

A common generalisation of these definitions can be found in the context of a uniform space, where an entourage is a set of all pairs of points that are at no more than a particular "distance" from each other.

It is also possible to replace Cauchy sequences in the definition of completeness by Cauchy nets or Cauchy filters. If every Cauchy net (or equivalently every Cauchy filter) has a limit in X, then X is called complete. One can furthermore construct a completion for an arbitrary uniform space similar to the completion of metric spaces. The most general situation in which Cauchy nets apply is Cauchy spaces; these too have a notion of completeness and completion just like uniform spaces. 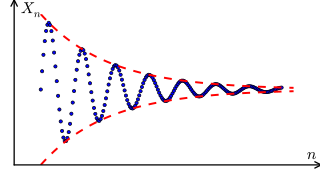 In mathematics, a Cauchy sequence, named after Augustin-Louis Cauchy, is a sequence whose elements become arbitrarily close to each other as the sequence progresses. More precisely, given any small positive distance, all but a finite number of elements of the sequence are less than that given distance from each other.

In mathematics, a topological ring is a ring R that is also a topological space such that both the addition and the multiplication are continuous as maps: