The Battle of Wiesloch (German : Schlacht bei Wiesloch ) occurred on 16 August 1632 during the Thirty Years' War near the German city of Wiesloch, south of Heidelberg.

The Thirty Years' War was a war fought primarily in Central Europe between 1618 and 1648. One of the most destructive conflicts in human history, it resulted in eight million fatalities not only from military engagements but also from violence, famine, and plague. Casualties were overwhelmingly and disproportionately inhabitants of the Holy Roman Empire, most of the rest being battle deaths from various foreign armies. In terms of proportional German casualties and destruction, it was surpassed only by the period January to May 1945; one of its enduring results was 19th-century Pan-Germanism, when it served as an example of the dangers of a divided Germany and became a key justification for the 1871 creation of the German Empire.

Wiesloch, is a city in Germany, in northern Baden-Württemberg. It is situated 13 kilometres south of Heidelberg. After Weinheim, Sinsheim and Leimen it is the fourth largest city of the Rhein-Neckar-Kreis and is in the north-central area near Heidelberg with its neighbouring town Walldorf with which it shares Wiesloch-Walldorf station. Also in the vicinity of Wiesloch are the cities and towns of Dielheim, Malsch, Mühlhausen, Rauenberg and Sankt Leon-Rot.

A Swedish army led by Count Gustav Horn fought an army of the Holy Roman Empire led by Count Ernesto Montecuccoli. The battle resulted in a Swedish victory.

The Swedish Empire was a European great power that exercised territorial control over much of the Baltic region during the 17th and early 18th centuries. The beginning of the Empire is usually taken as the reign of Gustavus Adolphus, who ascended the throne in 1611, and its end as the loss of territories in 1721 following the Great Northern War. 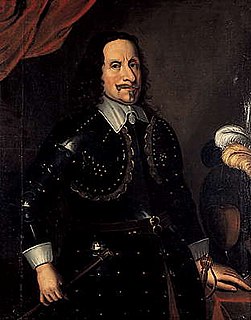 Count Gustav Horn af Björneborg was a Swedish nobleman, military officer and Governor-general. He was appointed member of the Royal Council in 1625, Field Marshal in 1628, Governor General of Livonia in 1652 and Lord High Constable since 1653. In the Thirty Years' War (1618–1648), he was instrumental as a commander in securing victory at the Battle of Breitenfeld, in 1631. He was High Councillor of the realm in 1625, elevated to the rank of field marshal in 1628, and sometimes commander-in-chief of Swedish forces in Germany during Thirty Years' War. After the war, he served as Governor-General of Livonia 1652, President of War department and Lord High Constable in 1653. In 1651, Queen Christina created him Count of Björneborg. 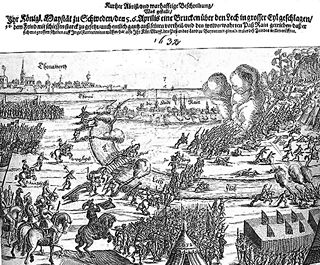 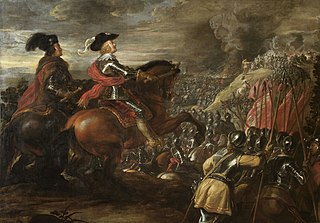 The Battle of Nördlingen was fought in 1634 during the Thirty Years' War, on 27 August or 6 September. The Roman Catholic Imperial army, bolstered by 15,000 Spanish soldiers, won a crushing victory over the combined Protestant armies of Sweden and their German-Protestant allies.

The Battle of Wittstock took place during the Thirty Years' War (1618-1648). It was fought on 24 September or 4 October 1636. A Swedish-allied army commanded jointly by Johan Banér and Alexander Leslie, later 1st Earl of Leven decisively defeated a combined Imperial-Saxon army, led by Count Melchior von Hatzfeld and the Saxon Elector John George I. 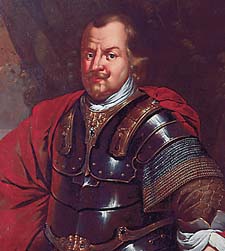 Johan Banér was a Swedish Field Marshal in the Thirty Years' War.

The Battle of Mingolsheim was fought on 27 April 1622, near the German village of Wiesloch, 23 km (14 mi) south of Heidelberg, between a Protestant army under General von Mansfeld and the Margrave of Baden-Durlach against a Roman Catholic army under Count Tilly.

Johann Tserclaes, Count of Tilly was a field marshal who commanded the Catholic League's forces in the Thirty Years' War. From 1620–31, he had an unmatched and demoralizing string of important victories against the Protestants, including White Mountain, Wimpfen, Höchst, Stadtlohn and the Conquest of the Palatinate. He destroyed a Danish army at Lutter and sacked the Protestant city of Magdeburg, which caused the death of some 20,000 of the cities inhabitants, both defenders and non-combatants, out of a total population of 25,000. Tilly was then crushed at Breitenfeld in 1631 by the Swedish army of King Gustavus Adolphus. A Swedish cannonball took his life at Rain. Along with Duke Albrecht von Wallenstein of Friedland and Mecklenburg, he was one of two chief commanders of the Holy Roman Empire’s forces in the first half of the war.

The Battle of Wimpfen was a battle in the Bohemian Revolt period of the Thirty Years' War on 6 May 1622 near Wimpfen.

Bernard of Saxe-Weimar was a German prince and general in the Thirty Years' War. 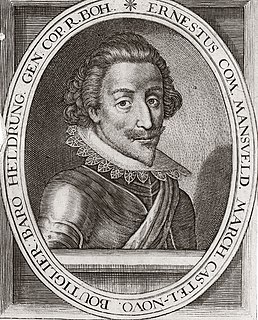 Ernst Graf von Mansfeld, was a German military commander during the early years of the Thirty Years' War.

The Second Battle of Breitenfeld, also known as the First Battle of Leipzig, took place on 23 October 1642 at Breitenfeld, some 7.5 kilometres (4.7 mi) north-east of Leipzig, Germany, during the Thirty Years' War. The battle was a decisive victory for the Swedish army under the command of Field Marshal Lennart Torstenson over an Imperial Army of the Holy Roman Empire under the command of Archduke Leopold Wilhelm of Austria and his deputy, Prince-General Ottavio Piccolomini, Duke of Amalfi.

Denmark has long been involved with the wars of Northern Europe and, recently, elsewhere. In the early Middle Ages, Danish Vikings invaded and conquered parts of the British Isles and Normandy. Later in the Middle Ages, Denmark was repeatedly in combat with Scandinavian neighbours and in the Baltic area. The "Union Wars" of the 15th and early 16th centuries took place between Denmark and Sweden, then united in the Kalmar Union. After Sweden broke away, Denmark – until 1814 remaining united with Norway – again confronted Sweden in the Northern Seven Years' War (1563–70) and the Kalmar War (1611–13). Denmark was heavily involved in the Thirty Years' War (1618–1648) on the side of the Protestants of the German lands. During the 16th to 18th centuries, Danish military involvement was also directed against Russia and other Eastern European nations in the series of Northern Wars and subsequent campaigns. 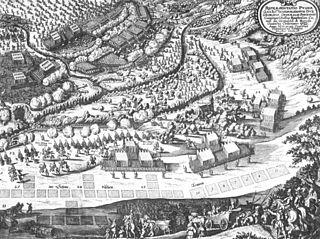 The Battle of Oldendorf on 8 July 1633 was fought as part of the Thirty Years' War between the Swedish Empire and the Holy Roman Empire near Hessisch-Oldendorf, Lower Saxony, Germany. The result was a decisive victory for the Swedish Army. 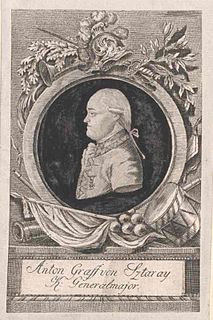 Anton Sztáray de Nagy-Mihály was a Hungarian count in the Habsburg military during Austria's Wars with the Ottoman Empire, the French Revolutionary Wars and the Napoleonic Wars. 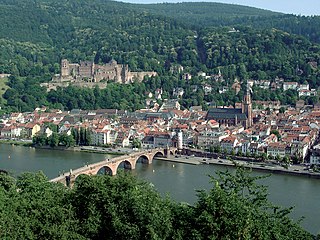 The Siege of Heidelberg or the Imperial-Spanish capture of Heildelberg took place from 23 July to 19 September 1622, at Heidelberg, Electorate of the Palatinate, between the Imperial-Spanish army led by Johan Tzerclaes, Count of Tilly and Don Gonzalo Fernández de Córdoba against the Anglo-Protestant forces of Frederick V, Elector Palatine, commanded by Sir Gerard Herbert and Sir Horace Vere during the Palatinate campaign, in the context of the Thirty Years' War. On 16 September the city of Heidelberg was taken by storm, and the Heidelberg Castle surrendered three days later to the Imperial and Spanish forces.

The Battle of Wiesloch occurred on 3 December 1799, during the War of the Second Coalition, part of the French Revolutionary Wars. Lieutenant Field Marshal Anton Count Sztáray de Nagy-Mihaly commanded the far right wing protecting the main Austrian army in Swabia, under the command of Archduke Charles, Duke of Teschen. With the victory at Wiesloch, Sztáray's force drove the French from the right bank of the Rhine and relieved the fortress at Philippsburg.

Lennart Torstensson, Count of Ortala, Baron of Virestad, was a Swedish Field Marshal and military engineer.

Count Ernesto Montecuccoli was a General in the service of the Holy Roman Empire during the Thirty Years War, a member of the prominent Italian Montecuccoli Family.