Bletia catenulata is a species of orchid native to Ecuador, Peru, Brazil, Colombia, Bolivia and Paraguay. [1] 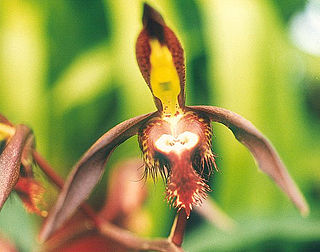 Catasetum, abbreviated as Ctsm. in horticultural trade, is a genus of showy epiphytic Orchids, family Orchidaceae, subfamily Epidendroideae, tribe Cymbidieae, subtribe Catasetinae, with 166 species, many of which are highly prized in horticulture. 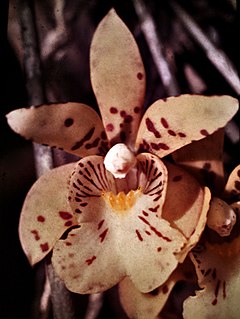 Scuticaria is a genus of orchids comprising 9 species native to Belize, Brazil, Ecuador, French Guiana, Guyana, Peru, Suriname and Venezuela. Members of this genus have showy flowers and long cylindrical leaves. They are epiphytic, occasionally lithophytic or terrestrial, that grow pending and are cespitously, or reptant and ascending, which exist is three isolated areas of South America, in Ecuador, Amazon Forest and Serra do Mar and Serra da Mantiqueira mountains, in Brazil, both in shady and sunny places.

Brassia verrucosa, also known as warty brassia, is a species of plant in the family Orchidaceae native to Mexico, Central America, Venezuela, and Brazil.

The tailed Brassia is a species of orchid. It is found widespread across the warmer parts of the Western Hemisphere, reported from southern Mexico, Central America, southern Florida, Greater Antilles, Trinidad, northern South America. It is also known by the names spider orchid and cricket orchid.

Cyrtopodium hatschbachii is a species of orchid. It is native to Brazil, Argentina and Paraguay.

Cyrtopodium parviflorum is a species of orchid. It is native to Trinidad and to South America.

Dactylorhiza elata is a species of flowering plant in the family Orchidaceae, native to the western Mediterranean region.

Oncidium baueri is a species of orchid native to Costa Rica and to South America as far south as Bolivia and Brazil.

Thelyschista is a monotypic genus of flowering plants from the orchid family, Orchidaceae. The sole species is Thelyschista ghillanyi, endemic to the Bahia region of Brazil.

Nidema is a genus of flowering plants from the orchid family, Orchidaceae. It contains two known species, both native to the tropical Western Hemisphere.

Nohawilliamsia is a genus of flowering plants from the orchid family, Orchidaceae. Only one species is recognized as of June 2014, Nohawilliamsia pirarensis, native to northern South America.

Habenaria repens, commonly called the water-spider bog orchid or the floating orchid, is an orchid species widespread across Latin America from Mexico and the West Indies south to Argentina, as well as in the Southeastern United States from Texas and Oklahoma east to Florida and the Carolinas plus an isolated population in Virginia. 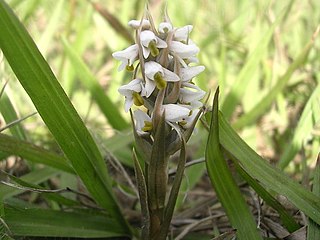 Zeuxine strateumatica, common names lawn orchid or soldier orchid, is a species of terrestrial orchids. It is widespread across much of Asia, including China, Japan, Uzbekistan, Iran, the Indian Subcontinent, Afghanistan, and Southeast Asia, as well as in New Guinea and in some of the islands of the Pacific. It is naturalized in Saudi Arabia, Brazil, Tamaulipas, West Indies, Hawaii, California, and the southeastern United States from Texas to Georgia.

Cyclopogon elatus is a species of terrestrial orchids. It is widespread across much of Latin America from Mexico to Argentina, as well as in the West Indies and southern Florida.

Malaxis cogniauxiana is a species of orchid native to Brazil.

Cattleya × elegans is a hybrid orchid in the subtribe Laeliinae. It is a pseudobulb epiphyte. Its formula hybridae is Cattleya purpurata Van den Berg (2008) × Cattleya tigrina A.Rich. (1848). It is found in South and South-East Brazil.