Blowing Wild is a 1953 American drama film directed by Hugo Fregonese starring Gary Cooper, Barbara Stanwyck, and Anthony Quinn. It was written by Philip Yordan. The story revolves around a love triangle set in the oilfields of an unnamed South American country plagued with bandits. Ruth Roman also stars and adds to the romantic entanglements.

Frankie Laine sang the title song, "Blowing Wild (The Ballad of Black Gold)", which was written by Dmitri Tiomkin, with lyrics by Paul Francis Webster.

After the bandit El Gavilan and his men blow up their oil rig, broke wildcatters Jeff Dawson and "Dutch" Peterson head back to town looking for work. Sal Donnelly, an American down on her luck, tries to use her charms to get Jeff to buy her a ticket to get home; Jeff offers his oil lease as payment, but the ticket taker shows him a fistful of leases he already has.

Jeff accepts a very dangerous job delivering unstable nitroglycerin the next day for $800, despite Dutch's protests. That night, Dutch tries to mug a man for enough money to buy a meal. The man turns out to be "Paco" Conway, an old friend and former partner of Jeff and Dutch, who has struck it rich. He offers them work, but his marriage to Jeff's old flame Marina makes Jeff turn it down. The next day, Jeff and Dutch (and the nitroglycerin) are ambushed by El Gavilan. They get away, though Dutch is shot in the leg.

When Jeff goes to collect their pay, Jackson claims he does not have that much on him. Sal, whom Jackson is romancing, tells Jeff that Jackson has $2500 in his wallet. Jeff gets his money, after a brawl, and gives $200 to Sal for her ticket. However, a policeman confiscates Jeff's $600, as Jackson has other creditors, though he is gracious enough to leave Sal her money. With Dutch in the hospital, Jeff reluctantly goes to work for Paco, drilling a new oil well.

Marina makes romantic overtures to Jeff, but he avoids her as best he can. He reminds her that he loved her once, but could not trust her. She admits it, but says she realized she loved him too after he had left. Paco remains oblivious to what is going on. To Jeff's initial annoyance, Sal gets a job as a blackjack dealer and sticks around. Later though, he starts going into town to see her.

When El Gavilan threatens to blow up Paco's oil wells unless he pays $50,000 extortion money, Paco considers paying, much to Jeff's disgust. Marina sides with Jeff, calling her husband a coward. A drunken Paco later laments publicly that his wife loves another man. He finally realizes the other man is Jeff. When Paco tells her that he loves her regardless, Marina pushes him into a well, where the machinery kills him. Marina claims that Paco fell in by accident. When she lets slip to Jeff that she killed Paco so they could be together, he nearly strangles her, then regains control of himself and leaves the house. Just then, the bandits attack. The local police and Jeff fight them. Marina is irresistibly drawn to the fatal oil well during the battle, and dies when it is blown up. Jeff kills El Gavilan, then leaves with Dutch and Sal.

The File on Thelma Jordon is a 1950 American film noir drama film directed by Robert Siodmak and starring Barbara Stanwyck and Wendell Corey. The screenplay by Ketti Frings, based on an unpublished short story by Marty Holland, concerns a woman who pretends to fall in love with an assistant district attorney and uses him to acquit her of the murder of her elderly aunt. 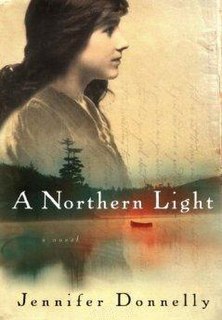 A Northern Light, or A Gathering Light in the U.K., is an American historical novel for young adults, written by Jennifer Donnelly and published by Harcourt in 2003. The story is known as Realistic Fiction because of the untrue life story of Mattie Gokey, the real death of Grace Brown, and the events that could take place in the 1900s. Set in northern Herkimer County, New York in 1906, it is based on the murder of Grace Brown case —the basis also for An American Tragedy by Theodore Dreiser (1925). It features a girl -the narrator-, who gets caught up in the events.

The Black Donnellys is an American drama television series that debuted on NBC on February 26, 2007, and last aired on May 14, 2007. Thereafter, NBC began releasing new episodes weekly on NBC.com until the series was cancelled. The Black Donnellys was created by Paul Haggis and Robert Moresco featured in the cast Jonathan Tucker, Olivia Wilde, Billy Lush, Tom Guiry, Kirk Acevedo, and relative newcomers Michael Stahl-David and Keith Nobbs. 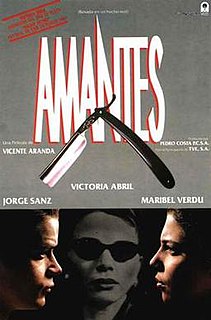 Lovers is a 1991 Spanish film noir written and directed by Vicente Aranda, starring Victoria Abril, Jorge Sanz and Maribel Verdú. The film brought Aranda to widespread attention in the English-speaking world. It won two Goya Awards and is considered one of the best Spanish films of the 1990s. 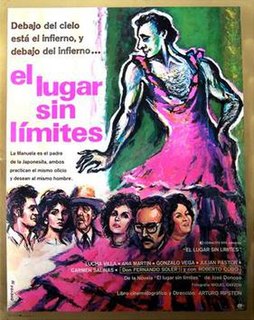 The Place Without Limits is a 1978 Mexican drama film directed by Arturo Ripstein, produced in Mexico and based on the 1966 novel of the same name written by Chilean José Donoso. The film was selected by Mexico as its entry for the Best Foreign Language Film at the 51st Academy Awards, but was not accepted as a nominee. In July 2018, it was selected to be screened in the Venice Classics section at the 75th Venice International Film Festival.

Ladies They Talk About is a 1933 pre-Code American crime drama directed by Howard Bretherton and William Keighley, and starring Barbara Stanwyck, Preston Foster, and Lyle Talbot. The film is about an attractive woman who is a member of a bank-robbery gang. It is based on the play Gangstress, or Women in Prison by Dorothy Mackaye and Carlton Miles. Mackaye had spent 10 months of a one- to three-year sentence in San Quentin State Prison. 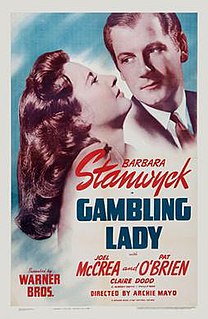 El Chanfle is a 1978 Mexican sports comedy movie written by and starring Chespirito.

The Return of Superfly is a 1990 American crime drama film directed by Sig Shore. The film is a sequel to the 1973 film Super Fly T.N.T.. It stars Nathan Purdee as Youngblood Priest and Margaret Avery. 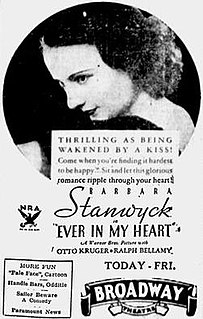 Red Salute is a 1935 American comedy film directed by Sidney Lanfield and starring Barbara Stanwyck and Robert Young. Based on a story by Humphrey Pearson, the film is about the daughter of a US Army general who becomes involved with a suspected communist agitator.

Carmina or Blow Up is a Spanish comedy-drama film, directed and written by Paco León. The film stars his mother Carmina Barrios (Carmina), his sister, María León (María), Paco Casaus and Ana Mª García (Ani). It is the first Spanish film released in cinemas, online and as a digital copy at the same time.

Sin tu mirada is a Mexican telenovela premiered on Las Estrellas on November 13, 2017, and concluded on April 15, 2018. Produced for Televisa by Ignacio Sada Madero. The telenovela revolves around Marina, a blind woman who because of her disability, has developed a great sensitivity.