Last updated February 27, 2019
This article is about the Argentine film. For the Mano Negra song, see Mala Vida.

Victor Marie Hugo was a French poet, novelist, and dramatist of the Romantic movement. Hugo is considered to be one of the greatest and best-known French writers. Outside France, his most famous works are the novels Les Misérables, 1862, and The Hunchback of Notre-Dame, 1831. In France, Hugo is known primarily for his poetry collections, such as Les Contemplations and La Légende des siècles.

Hugo Mario Montenegro was an American orchestra leader and composer of film soundtracks. His best known work is derived from interpretations of the music from Spaghetti Westerns, especially his cover version of Ennio Morricone's main theme from the 1966 film The Good, the Bad and the Ugly. He composed the musical score for the 1969 Western Charro! which starred Elvis Presley.

Pipilotti (Elisabeth) Rist is a visual artist. She is best known for creating experiential video art and installation art that often portrays self-portraits and singing. Her work is often described as surreal, intimate, abstract art, having a preoccupation with the female body. Her artwork is often categorized as feminist art. In a 2011 Guardian exhibition review article, Rist describes her feminism: "Politically," she says, "I am a feminist, but personally, I am not. For me, the image of a woman in my art does not stand just for women: she stands for all humans. I hope a young guy can take just as much from my art as any woman." 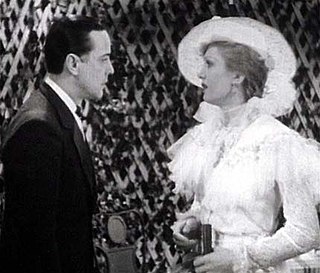 Honeysuckle (Spanish:Madreselva) is a 1938 Argentine musical film directed by Luis César Amadori and starring Hugo del Carril, Libertad Lamarque and Malisa Zini. The film premièred in Buenos Aires on 5 November 1938. The film was a popular success. Its plot is loosely based on the lyrics of a tango song of the same name. It is a tango film, an extremely popular genre during the Golden Age of Argentine Cinema. It was screened at the Venice Film Festival.

When the Heart Sings is a 1941 Argentine musical drama film directed by Richard Harlan and starring Hugo del Carril, Aída Luz and José Olarra. A man from a wealthy background meets and marries an actress despite fierce opposition from his family.

The Yacht Isabel Arrived This Afternoon is a 1949 Venezuelan-Argentine film directed by Carlos Hugo Christensen. It was entered into the 1951 Cannes Film Festival.

A Story of the Nineties is a 1949 Argentine musical film directed by Hugo del Carril and starring del Carril, Sabina Olmos and Santiago Arrieta. The film marked del Carril's directorial debut. Sets in the 1890s, It was one of a number of tango-influenced films produced in Argentina.

Beyond the Sun is a 1975 Argentine biopic drama film directed by Hugo Fregonese. It is a biopic of an Argentine aviation pioneer. It was the final film of Fregonese who had been a leading Argentine director.

The Englishman of the Bones is a 1940 Argentine drama film based on a novel of the same name.

The Lady of Death is a 1946 Chilean thriller film directed by Carlos Hugo Christensen for Chile Films S.A. and starring Carlos Cores, Judith Sulian and Guillermo Battaglia. The film is based on the short story The Suicide Club by Robert Louis Stevenson.

By the Light of a Star is a 1941 Argentine musical drama film directed by Enrique Santos Discépolo and starring Hugo del Carril, Ana María Lynch and María Esther Gamas. It is a tango film, an extremely popular genre during the Golden Age of Argentine Cinema.

The Tango Star is a 1940 Argentine musical film directed by Luis Bayón Herrera and starring Hugo del Carril, Amanda Ledesma and Berta Aliana. A tango star enjoys a relationship with a young woman from a wealthy family.

Savage Pampas is a 1945 Argentine historical film directed by Lucas Demare and Hugo Fregonese and starring Francisco Petrone, Luisa Vehil and Domingo Sapelli. The film's sets were designed by Germán Gelpi. The film is set in the nineteenth century in the Dry Pampas, when it represented a frontier between Argentinian-controlled territory and areas still largely inhabited by Indians before the Conquest of the Desert extended Argentine control southwards. In 1966, Fregonese remade the film in English under the same title.

The Trap is a 1949 Argentine thriller film directed by Carlos Hugo Christensen and starring Zully Moreno, George Rigaud and Juana Sujo. A woman marries a man without understanding the darker depths of his personality.

Rue Mondétour is a small pedestrian street in the 1st arrondissement of the city of Paris.