The Bombini are a tribe of large bristly apid bees which feed on pollen or nectar. Many species are social, forming nests of up to a few hundred individuals; other species, formerly classified as Psithyrus cuckoo bees, are brood parasites of nest-making species. The tribe contains a single living genus, Bombus , the bumblebees, [1] and some extinct genera such as Calyptapis and Oligobombus . [2] The tribe was described by Pierre André Latreille in 1802.

Calyptapis florissantensis was described by Theodore Dru Alison Cockerell in 1906 from the Chadronian (Eocene) lacustrine – large shale of Florissant in the US. [4] [5]

Oligobombus cuspidatus was described by Antropov et al (2014) from the Late Eocene Insect Bed of the Bembridge Marls on the Isle of Wight, England. The holotype fossil was described by re-examining a specimen in the Smith Collection. [6] [7]

Palaeovespa is an extinct genus of wasp in the Vespidae subfamily Vespinae. The genus currently contains eight species, five from the Priabonian stage Florissant Formation in Colorado, United States two from the middle Eocene Baltic amber deposits of Europe. and one species from the late Paleocene of France.

Protostephanus is an extinct genus of crown wasp in the Hymenoptera family Stephanidae known from an Eocene fossil found in the United States of America. The genus contains a single described species, Protostephanus ashmeadi placed in the stephanid subfamily Stephaninae. 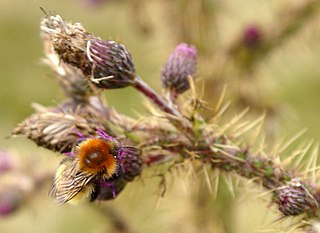 Bombus muscorum, commonly known as the large carder bee or moss carder bee, is a species of bumblebee in the family Apidae. The species is found throughout Eurasia in fragmented populations, but is most commonly found in the British Isles. B. muscorum is a eusocial insect. The queen is monandrous, mating with only one male after leaving a mature nest to found its own. Males mate territorially and the species is susceptible to inbreeding and bottlenecks. The species builds its nests on or just under the ground in open grassland and forages very close to the nest. In recent years, populations have significantly declined due to loss of natural habitat. B. muscorum is currently listed as vulnerable in Europe by the European Red List of Bees.

Emplastus is an extinct morphogenus of ants in the subfamily Dolichoderinae, known from fossils found in Asia and Europe. The genus contains twelve species described from sites in England, Eastern Europe and Far Eastern Russia.

Calyptapis is an extinct bombini genus related to bumblebees with one described species Calyptapis florissantensis. It is known only from the Late Eocene Chadronian age shales of the Florissant Formation in Colorado. the genus and species were described by Theodore Dru Alison Cockerell in 1906.

Oligobombus is an extinct genus of bumblebee relatives in the tribe Bombini, containing the single species Oligobombus cuspidatus. The genus and species were described by Antropov (2014) based on a single fore-wing from the Late Eocene Bembridge Marls Insect Bed on the Isle of Wight, England. The fossil was described by re-examining a specimen in the Smith Collection. The collection was originally made by A'Court Smith, and purchased by the Natural History Museum in 1877 and 1883.

Bombus cerdanyensis is an extinct species of bumble bee in the family Apidae known from a fossil found in Europe.

Wilmatte Porter Cockerell was an American entomologist and high school biology teacher who discovered and collected a large number of insect specimens and other organisms. She participated in numerous research and collecting field trips including the Cockerell-Mackie-Ogilvie expedition. She wrote several scientific articles in her own right, co-authored more with her husband, Theodore Dru Alison Cockerell, and assisted him with his prolific scientific output. She discovered and cultivated red sunflowers, eventually selling the seeds to commercial seed companies. Her husband and her entomological colleagues named a number of taxa in her honor. 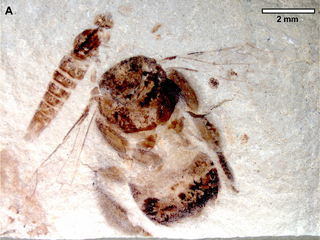 Euglossopteryx is an extinct genus of bee in the family Apidae known from a fossil found in North America. There is one described species in the genus, Euglossopteryx biesmeijeri.

Gyaclavator is an extinct genus of lace bug in the family Tingidae known from a fossil found in North America. The genus contains a single species, Gyaclavator kohlsi.

Bombus trophonius is an extinct species of bumble bee known from a Miocene fossil found in Europe. It belongs to the Bombus subgenus Cullumanobombus and is considered most similar to the living species Bombus rufocinctus of North America.

Bombus vandykei, the Van Dyke's bumble bee, is a species of bumble bees in the family Apidae. It is found in North America.