Bootle Football Club was an English football club based in Bootle, Lancashire. Founder members of the Football Alliance, the club was one of the first two clubs to resign from the Football League. [1] and also one of only two clubs (the other being Middlesbrough Ironopolis F.C.) to spend a single season in the League.

Bootle F.C. were formed in 1879 as Bootle St Johns AFC and played their first fixture in October 1880 against Everton. [1] Later that year the club changed its name to Bootle F.C. and then entered the FA Cup for the first time the following season. [1] Playing at Hawthorne Road, Bootle applied to become founder members of the Football League. Unlike neighbours Everton, their application was unsuccessful. Instead, in 1889–90 Bootle became founder members of the Football Alliance. [1] That season was their most successful as they finished league runners-up, reached the quarter-finals of the FA Cup, where they lost 7–0 to Blackburn Rovers. [2]

When the Alliance merged with the Football League in 1892, Bootle became founder members of the new Second Division. [4] Despite finishing in eighth position, the club resigned after one season, becoming one of the first two clubs to do so (the other being Accrington F.C.). It was replaced by neighbours Liverpool, and seemingly disappeared due to financial problems. Bootle and Middlesbrough Ironopolis are the only two clubs to have spent just one season in the Football League. [5]

Everton Football Club is an English professional football club based in Liverpool that competes in the Premier League, the top tier of English football. The club has competed in the top division for a record 116 seasons and has missed the top division only four times since the creation of the Football League, of which it is a founding member. The club has won nine League Championships, five FA Cups, and one UEFA Cup Winners Cup.

1893 in sports describes the year's events in world sport. 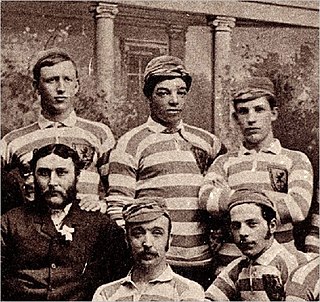 Andrew Watson is widely considered to be the world's first black person to play association football at international level. He played three matches for Scotland between 1881 and 1882. Arthur Wharton was commonly thought to be Britain's first black player, as he was the first black professional footballer and the first to play in the Football League, but Watson's career predated him by over a decade.

Wanderers Football Club is an English football club based in Upper Norwood, London. The original club was an amateur one founded as "Forest Football Club" in 1859. In 1864, it changed its name to "Wanderers". Comprising mainly former pupils of the leading English public schools, Wanderers was among the dominant teams of the early years of organised football and won the Football Association Challenge Cup on five occasions, including defeating Royal Engineers in the first FA Cup final in 1872.

Runcorn F.C. Halton was an English football club that played in Runcorn, Widnes and Prescot at various points during its existence.

Bootle Football Club is an English football club based in Bootle, Merseyside. The club are members of the North West Counties League Premier Division and play at New Bucks Park.

Andrew Hannah was a Scottish international footballer who played at right back. He missed just two games in Everton's 1890–91 title winning season. In 1892 he became the first captain of Liverpool F.C. In 2006 he was listed in 100 players who shook the Kop, a Liverpool fan poll.

Hugh Galbraith was a Scottish footballer, most notable as a player for Luton Town.

The 1892–93 season was Ardwick A.F.C.'s second season of league football. Following the amalgamation of the Football Alliance with the Football League, Ardwick was elected to the new Second Division in the inaugural season of two-tier football in England, and the season marked the start of Ardwick 's exactly 100-year stay in the Football League before leaving in 1992 to co-found the Premier League.

The 1892–93 season was the first season in the history of Newcastle United after the merger of Newcastle East End and Newcastle West End. The club started the season as Newcastle East End, taking the name Newcastle United during December. They participated in the Northern League, the only season they have not competed in The Football League, finishing in second place behind Middlesbrough Ironopolis. They also competed in the FA Cup, but lost in the first round to Middlesbrough.

The 1892–93 season was the fourth in existence for Sheffield United. This was their first season playing in the recently formed Football League Second Division as the club sought to establish itself as a major footballing force. With some members of the football committee unconvinced of the long-term future of the Football League, the club also retained its membership of the Northern League.