Leeds City Football Club was the leading professional club in Leeds, England, before the First World War. It was dissolved in 1919 due to financial irregularities, after which Leeds United was established as a replacement.

The club was established in 1904, taking the coat of arms of Leeds as the club badge [1] and adopting blue, yellow and white as the club's colours. [2] They were elected to the Football League in 1905. The original secretary, a role that then also carried the modern responsibilities of manager and coach, was Gilbert Gillies (1904–1908) who was followed by Frank Scott-Walford before in 1912, they appointed Herbert Chapman who guided the club to their highest position in the league (4th in the Second Division).

Leeds City's whole league career was in the Second Division. However, during the First World War the club won several wartime honours under the stewardship of Herbert Chapman. Following the conclusion of the war a scandal ensued and the club was accused of financial irregularities, including breaking the ban on paying players during the war, that led to the club's dissolution in 1919. They were expelled from The Football League eight games into the 1919–20 season. The harsh punishment was handed down mostly because of the behaviour of the club's directors, who refused to co-operate in an FA inquiry, and refused to hand over the club's financial records. [3]

Port Vale took over their remaining fixtures (as well as their results up to that point). [4] Leeds City were the first club to be expelled from the League mid-season, and one of only two to be expelled from the League due to financial irregularities, with Bury expelled a century later in 2019. Ironically, Leeds City's successors, Port Vale, nearly lost their League status for similar reasons in 1968, although they ultimately managed to retain it in an end-of-season vote among the other clubs. On 17 October 1919, an auction was held at the Metropole Hotel in Leeds, where the playing staff was auctioned off along with other assets of the club. The 16 members of the playing squad were bought by nine clubs for a total of £9,250: [5]

In the wake of its demise, Leeds United was formed, and entered the Football League the following year. None of the players auctioned ever played for the new Leeds United, but winger Ivan Sharpe, who had scored 17 goals in 65 appearances for City between 1913 and 1915, spent 2½ years at United between 1920 and 1923 only making one appearance and right-half Harry Sherwin, who left City just five months before its dissolution, went on to score twice in 107 games for United between 1921 and 1925.

A second Leeds City was established in 1924 as an amateur club and joined the Yorkshire League. [6] That club folded after leaving the league at the end of the 1926–27 season.

Having originally played at the Wellington Ground, The club moved into Elland Road after Holbeck Rugby Club folded in October 1904. [11] In their first season in the Football League their average attendance was 10,025, the third highest in the Second Division. [12] Their best season, 1913–14, saw them average 15,845. [13]

Port Vale Football Club is a professional association football club based in Burslem, Stoke-on-Trent, England. The team competes in EFL League Two, the fourth tier of the English football league system. Port Vale is one of the few English league clubs not to be named after a geographical location, their name being a reference to the valley of ports on the Trent and Mersey Canal. They have never played top-flight football, and hold the records for the most seasons in the English Football League (110) and in the second tier (41) without reaching the first tier. After playing at the Athletic Ground in Cobridge and The Old Recreation Ground in Hanley, the club returned to Burslem when Vale Park was opened in 1950. Outside the ground is a statue to Roy Sproson, who played 842 competitive games for the club. The club's traditional rivals are Stoke City, and games between the two are known as the Potteries derby.

1919 in sports describes the year's events in world sport. Although World War I had ended in 1918, the influenza pandemic and planning difficulties from the war still curtailed sport to a considerable extent. 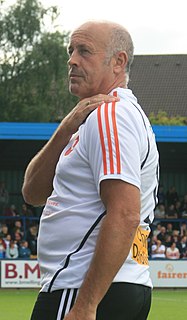 Martin John Foyle is an English former professional footballer and manager. In his 20-year playing career he played 533 League games, scoring 155 goals. As a manager, he took charge of Port Vale and York City, Northwich Victoria, Hereford United and Southport. Harrogate Town Association Football Club is a professional association football club based in the spa town of Harrogate, North Yorkshire, England. The club competes in League Two, the fourth tier of English football, after winning the 2019–20 National League play-offs. The club is nicknamed "Town" and also the "Sulphurites", due to Harrogate's famous sulphur springs. The club's colours are black and yellow and they play their home games at Wetherby Road, though for a short period at the start of the 2020–21 season, the club shared Doncaster Rovers' Keepmoat Stadium while a new pitch was laid.

This was a Scottish non-league football (soccer) competition that ran at various times between 1891 and 1946. 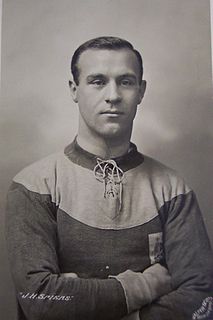 The 1919–1920 season was the 45th season of competitive football in England, and the first following the end of World War I. 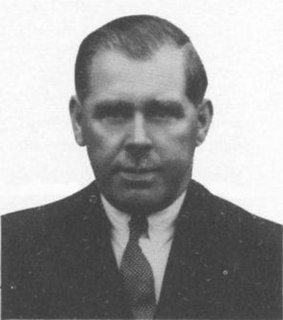 The city of Leeds, West Yorkshire, United Kingdom, has several Football Clubs within its boundaries. Due to the popularity of rugby league almost all association football clubs in the city have the suffix "A.F.C." instead of the more prevalent "F.C." used in most of England, such as Leeds Woodville A.F.C. who were one of the earliest Victorian teams.

The rivalry between Leeds United and Manchester United, sometimes nicknamed the Roses rivalry or the Pennines derby, is a footballing rivalry played between the Northern English clubs Leeds United and Manchester United. The rivalry originates from the strong enmity between the historic counties of Lancashire and Yorkshire, which is popularly believed to have its origins in the Wars of the Roses of the 15th century. Although the cities of Leeds and Manchester lie over 40 miles (64 km) apart, the tradition is upheld and this strong feeling can still be seen between the two clubs. Independent research by the Football Fans Census has shown that, within English football, both Leeds and Manchester United are ranked within the top three clubs based on the number of clubs that consider them to be their rivals.

The 1919–20 season was the 28th season of The Football League, and the first season after football was suspended after outbreak of World War I 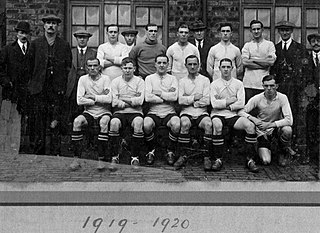 The 1967–68 season was Port Vale's 56th season of football in the English Football League, and their third successive season in the Fourth Division. A poor season saw them battle to mid-table in order to avoid the re-election zone. Yet it would be off-the-field developments that would worry Vale supporters the most. An FA/Football League Joint-Inquiry investigated the club as club officials were forced to admit several breaches of the rules in regard to payment of players. The result was expulsion from the League, however before the start of the following season a vote of 39 to 9 allowed the club to be immediately readmitted to the competition. The whole saga was rather ironic, as the club re-entered the League in 1919 after Leeds City were expelled over illegal payments to their players. On the playing front it was the final season of both Harry Poole and Terry Miles' careers.

The Midland Football League was a semi-professional football league in England. It acted as a feeder league to the Football League for many years before merging with the Yorkshire League in 1982 to form the Northern Counties East League.