Burgess was a British title used in the medieval and early modern period to designate someone of the Burgher class. It originally meant a freeman of a borough or burgh but later coming to mean an official of a municipality or a representative in the House of Commons.

In England, burgess meant an elected or unelected official of a municipality, or the representative of a borough in the English House of Commons. [1] This usage of "burgess" has since disappeared. Burgesses as freemen had the sole right to vote in municipal or Parliamentary elections. However, these political privileges in Britain were removed by the Reform Act in 1832. [2]

Burgesses were originally freeman inhabitants of a city where they owned land and who contributed to the running of the town and its taxation. The title of burgess was later restricted to merchants and craftsmen, so that only burgesses could enjoy the privileges of trading or practising a craft in the city through belonging to a Guild (by holding a Guild Ticket) or were able to own companies trading in their guild's craft. [3] One example are the Burgess of Edinburgh.

The burgesses' ancient exclusive trading rights through their Guilds were abolished in 1846. Thereafter a burgess became a title which gave social standing to the office and usually carried with it a role which involved charitable activities of their guild or livery company, as it does today. [4]

The term was also used in some of the American colonies. In the Colony of Virginia, a "burgess" was a member of the legislative body, which was termed the "House of Burgesses". [1]

It was derived in Middle English and Middle Scots from the Old French word burgeis, simply meaning "an inhabitant of a town" (cf. burgeis or burges respectively). The Old French word burgeis is derived from bourg, meaning a market town or medieval village, itself derived from Late Latin burgus, meaning "fortress" [5] or "wall". In effect, the reference was to the north-west European medieval and renaissance merchant class which tended to set up their storefronts along the outside of the city wall, where traffic through the gates was an advantage and safety in event of an attack was easily accessible. The right to seek shelter within a burg was known as the right of burgess. [6]

The term was close in meaning to the Germanic term burgher , a formally defined class in medieval German cities (Middle Dutch burgher, Dutch burger and German Bürger). It is also linguistically close to the French term bourgeois , which evolved from burgeis.

The original version of the well-known English folk song "Greensleeves" includes the following:

Thy purse and eke thy gay guilt knives, thy pincase gallant to the eye: No better wore the Burgesse wives, and yet thou wouldst not love me.

This clearly implies that at the time when it was composed (late 16th to early 17th century) a burgess was proverbial as being able to provide his wife with beautiful and expensive clothes. 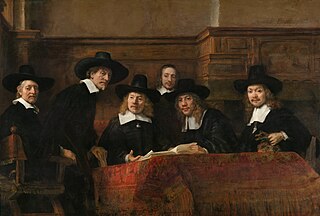 A guild is an association of artisans and merchants who oversee the practice of their craft/trade in a particular area. The earliest types of guild formed as organizations of tradesmen belonging to a professional association. They sometimes depended on grants of letters patent from a monarch or other ruler to enforce the flow of trade to their self-employed members, and to retain ownership of tools and the supply of materials, but were mostly regulated by the city government. A lasting legacy of traditional guilds are the guildhalls constructed and used as guild meeting-places. Guild members found guilty of cheating the public would be fined or banned from the guild.

The bourgeoisie is a sociologically defined social class, equivalent to the middle or upper middle class. They are distinguished from, and traditionally contrasted with, the proletariat by their affluence, and their great cultural and financial capital. They are sometimes divided into a petty, middle, large, upper, and ancient bourgeoisie and collectively designated as "the bourgeoisie". 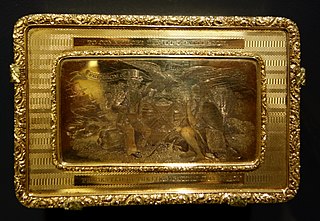 The Freedom of the City is an honour bestowed by a municipality upon a valued member of the community, or upon a visiting celebrity or dignitary. Arising from the medieval practice of granting respected citizens freedom from serfdom, the tradition still lives on in countries such as the United States, United Kingdom, Ireland, Australia, Canada, South Africa and New Zealand—although today the title of "freeman" confers no special privileges. The Freedom of the City can also be granted by municipal authorities to military units which have earned the city's trust; in this context, it is sometimes called the Freedom of Entry. This allows them the freedom to parade through the city, and is an affirmation of the bond between the regiment and the citizenry. 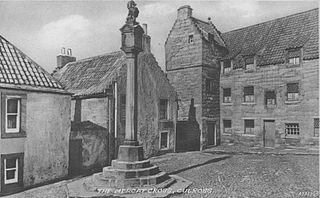 A burgh is an autonomous municipal corporation in Scotland and Northern England, usually a city, town, or toun in Scots. This type of administrative division existed from the 12th century, when King David I created the first royal burghs. Burgh status was broadly analogous to borough status, found in the rest of the United Kingdom. Following local government reorganisation in 1975, the title of "royal burgh" remains in use in many towns, but now has little more than ceremonial value.

The estates of the realm, or three estates, were the broad orders of social hierarchy used in Christendom from the Middle Ages to early modern Europe. Different systems for dividing society members into estates developed and evolved over time.

Burgher may refer to:

Town privileges or borough rights were important features of European towns during most of the second millennium. The city law customary in Central Europe probably dates back to Italian models, which in turn were oriented towards the traditions of the self-administration of Roman cities.

A thrall was a slave or serf in Scandinavian lands during the Viking Age. The corresponding term in Old English was þēow. The status of slave contrasts with that of the freeman and the nobleman. The Middle Latin rendition of the term in early Germanic law is servus.

Patricianship, the quality of belonging to a patriciate, began in the ancient world, where cities such as Ancient Rome had a social class of patrician families, whose members were initially the only people allowed to exercise many political functions. In the rise of European towns in the 12th and 13th century, the patriciate, a limited group of families with a special constitutional position, in Henri Pirenne's view, was the motive force. In 19th century Central Europe, the term had become synonymous with the upper Bourgeoisie and cannot be interchanged with the medieval patriciate in Central Europe. In German-speaking parts of Europe as well as in the maritime republics of the Italian Peninsula, the patricians were as a matter of fact the ruling body of the medieval town. Particularly in Italy, they were part of the nobility. 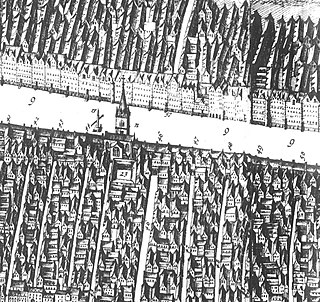 Burgage is a medieval land term used in Great Britain and Ireland, well established by the 13th century.

A labour council, trades council or industrial council is an association of labour unions or union branches in a given area. Most commonly, they represent unions in a given geographical area, whether at the district, city, region, or provincial or state level. They may also be based on a particular industry rather than geographical area, as for example, in the Maritime Council of Australia which co-ordinated the waterfront and maritime unions involved in the 1890 Australian Maritime Dispute.

The Peasant War in Germany by Friedrich Engels is a short account of the early-16th-century uprisings known as the German Peasants' War (1524–1525). It was written by Engels in London during the summer of 1850, following the revolutionary uprisings of 1848–1849, to which it frequently refers in a comparative fashion. "Three centuries have flown by since then," he writes, "and many a thing has changed; still the peasant war is not as far removed from our present-day struggles as it would seem, and the opponents we have to encounter remain essentially the same." 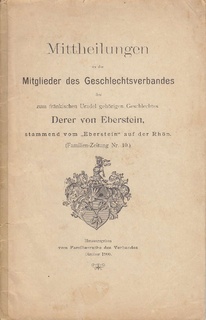 Uradel is a genealogical term introduced in late 18th-century Germany to distinguish those families whose noble rank can be traced to the 14th century or earlier. The word stands opposed to Briefadel, a term used for titles of nobility created in the early modern period or modern history by letters patent. Since the earliest known such letters were issued in the 14th century, those knightly families in northern European nobility whose noble rank predates these are designated uradel.

In European historiography, the term "staple" refers to the entire medieval system of trade and its taxation; its French equivalent is étape, and its German equivalent stapeln, words deriving from Late Latin stapula with the same meaning, derived from stabulum. designating a system that Hadrianus Junius considered to be of Gaulish origin. 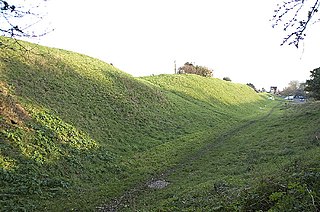 Burgher arms or bourgeois arms are coats of arms borne by persons of the burgher social class of Europe since the Middle Ages. By definition, however, the term is alien to British heraldry, which follows other rules.

"The Taill of the Uponlandis Mous and the Burges Mous", also known as "The Twa Mice," is a Middle Scots adaptation of Aesop's Fable The Town Mouse and the Country Mouse by the Scottish poet Robert Henryson. Written around the 1480s, it is the second poem in Henryson's collection called The Morall Fabillis of Esope the Phrygian. 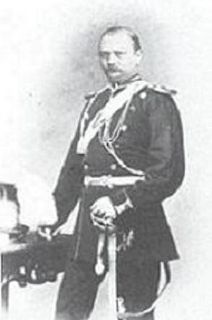 Grand Burgher [male] or Grand Burgheress [female] is a specific conferred or inherited title of medieval German origin and legally defined preeminent status granting exclusive constitutional privileges and legal rights, who were magnates and subordinate only to the Emperor, independent of feudalism and territorial nobility or lords paramount. A member class within the patrician ruling elite, the Grand Burgher was a type of urban citizen and social order of highest rank, a formally defined upper social class of affluent individuals and elite burgher families in medieval German-speaking city-states and towns under the Holy Roman Empire, who usually were of a wealthy business or significant mercantile background and estate. This hereditary title and influential constitutional status, privy to very few individuals and families across Central Europe, formally existed well into the late 19th century and early part of the 20th century. In autonomous German-speaking cities and towns of Central Europe that held a municipal charter, town privileges or were a free imperial city such as Hamburg, Augsburg, Cologne and Bern that held imperial immediacy, where nobility had no power of authority or supremacy, the Grand Burghers (Großbürger) or patricians ("Patrizier") constituted the ruling class.

A burgher was a rank or title of a privileged citizen of medieval towns in early modern Europe. Burghers formed the pool from which city officials could be drawn, and their immediate families formed the social class of the medieval bourgeoisie.