Christopher John Wilson (born November 18, 1980) is an American auto racing team owner and former professional baseball pitcher. Wilson pitched in Major League Baseball (MLB) for the Texas Rangers from 2005 to 2011 and the Los Angeles Angels of Anaheim from 2012 to 2015. He is the founder and owner of sports car team CJ Wilson Racing, which competes in IMSA Michelin Pilot Challenge full-time and WeatherTech SportsCar Championship part-time. [1]

After attending Fountain Valley High School (graduating in 1998), Wilson played at Santa Ana College where in 2000 he was named the MVP of the Orange Empire Conference, and awarded the California Junior College Co-Player of the Year award. Wilson played outfield, first base, starting pitcher, and relief pitcher at Loyola Marymount University during the 2001 season.

Wilson was drafted by the Rangers in the fifth round (141st overall) of the 2001 MLB draft.

After starting the 2001 season in Pulaski of the Appalachian League he was promoted to Class A with the Savannah Sand Gnats. He moved through High-A Charlotte (Florida State League) and into Double-A Tulsa (Texas League) by late 2002.

For 2003, Wilson returned to Double-A with Frisco RoughRiders of the Texas League, earning Pitcher of the Week honors in May. His up and down season was cut short due to injury which resulted in season-ending Tommy John surgery on August 12.

After missing all of 2004 due to the elbow injury, Wilson was able to return to Double-A in 2005 before being called up to the majors later that season. He posted a 1–7 record and 6.94 ERA in 24 games during his rookie campaign with the Rangers. Later in the season, Texas placed him in the bullpen full-time where he went 1–2 with a 2.73 ERA in 18 relief appearances.

He started the 2006 season on the 15-day disabled list with a strained hamstring before returning to the team going 1–2 with a 5.16 ERA with the Rangers before getting optioned to Triple-A on June 1. While in the minors, he went 1–0 with a 2.45 ERA with two saves, and in 11 innings, he struck out 17 and walked five in nine appearances. After being recalled July 18, Wilson ended the season strong, posting second half numbers of a 3.29 ERA in 24+2⁄3 innings and 27 appearances and ending the season as the team's top left-handed setup man, posting a 2–4 record and 4.06 ERA overall for Texas. He proved especially tough against lefties, with an ERA of 1.77 with 19 strikeouts in 20+1⁄3 innings.

In 2010, Wilson returned to his past role as a starting pitcher with Texas. Wilson had expressed an interest in returning to the rotation as early as 2006 and was told to report to spring training in condition to start. Early conjecture amongst sports writers and fans covering the Rangers spring training debated if Wilson would actually be able to earn a spot in the rotation. After making several impressive spring starts pitching coach Mike Maddux was asked if Wilson was making the rotation a tough call to which Maddux said, "He's making it a great call." [2] Wilson was named the third starting pitcher in the rotation behind Scott Feldman and Rich Harden.

At the end of April, Wilson was leading the Rangers rotation with an ERA of 1.76 after 4 starts, fourth best in the AL. On May 7 against the Kansas City Royals, Wilson threw a complete game winning 4–1. It was Wilson's second credited complete game of the year and career, the previous being a rain-shortened six-inning loss to the Yankees. [3] Wilson set 2 club records after his May 13 start against the A's with the most consecutive innings without a home run and most consecutive quality starts to start a season. [4] Wilson gave up his first home run on May 19 against the Angels' Torii Hunter after 87+2⁄3 innings dating back from 2009. [5] Wilson's consecutive quality starts also ended in the same game.

Wilson led the team in wins and ERA while throwing more than 200 innings. He was named the second starter behind Cliff Lee for the playoffs.

In Wilson's first playoff game, he pitched 6.1 innings allowing no runs on two hits, seven strikeouts, and two walks in a 6–0 win in Game 2 against the Tampa Rays in the American League Divisional playoff series. He threw 104 pitches supported by an Ian Kinsler home run and RBI single and a Michael Young 3-run home run in the fifth.

Wilson was a 2011 American League All Star. [7] After the Rangers clinched the AL West on September 23, manager Ron Washington announced Wilson would be the team's ALDS game one starting pitcher. [8]

On December 8, 2011 Wilson agreed to a five-year, $77.5 million deal with the Los Angeles Angels of Anaheim. [10] [11] This deal came only hours after Albert Pujols signed a record breaking ten-year, $250 million deal with Anaheim. The contract became official on December 10. [12]

On May 22, 2012, Wilson and Ernesto Frieri pitched a combined one-hit shutout against the Oakland Athletics in Oakland, a place Wilson said that he strongly disliked pitching while with the Texas Rangers. [13] Wilson struck out seven and allowed two walks while giving up a single. [14] He was selected to the All-Star Game in 2012 after going 9–5 with a 2.43 ERA for the Angels. He finished the season with a 13–10 record in 34 starts. He followed the 2012 season with another successful season, winning a career high 17 games while lowering his ERA from the prior season to 3.39.

Despite the team making the playoffs in 2014, Wilson did not have a good season, finishing with an ERA of 4.51 and leading the majors in walks with 85. Due to his high pitch counts, Wilson averaged less than 6 innings per start. Wilson's season was cut short in 2015, starting only 21 games before going out with an elbow injury in early August. [15] He opted for elbow surgery.

He started the 2016 season on the disabled list recovering from elbow and shoulder surgery. On July 5, it was announced that Wilson would undergo season-ending shoulder surgery, ending his career. [16]

Wilson said he attempted to keep his opponents' batting average on balls in play down by "using [my] pitch mix a certain way" and by taking into account his defense's alignment when he pitches. [19]

Wilson is a devoted Taoist (converted from Christianity) and adheres to a Straight Edge way of life (abstaining from alcohol, illegal drugs, tobacco, and promiscuous sex in order to maintain health). [20] As a sign of his choice of being Straight Edge, Wilson has the words "Straight Edge" tattooed along the length of his torso, Japanese characters on his shoulder that read "Poison Free" and "XXX" stitched on his blue glove as a straight edge symbol. [21] The blue glove is itself unusual among baseball players (who generally wear a traditional brown-colored glove). Wilson wore the blue glove when the Rangers wore their blue uniforms (or their road grey uniforms); he also had a similarly decorated red glove when pitching in games where the Rangers wore red uniforms. Wilson used a black glove, a brown glove, and at least one other red glove while playing for the Angels, all of which bore the same embroidery. During his time on the Angels, he also used a bright-blue glove with red lacing that was embroidered with "X C.J. X", where the use of the letter X surrounding his name similarly represents his straight edge lifestyle.

Wilson is highly interested in conservative politics, which he said is in stark contrast to other Major League baseball players. [22] His characterizations of typical ballplayers in this same interview and some of his posts on the blog lonestarball.com generated minor controversy within the Rangers' clubhouse. [23]

Wilson races racecars in his free time, and has mentioned he aims to be a professional racer after his baseball career; he also is highly interested in cars, having a collection of Porsches as well as a custom painted McLaren P1. Wilson won the E1 class in the 2010 25 Hours of Thunderhill. [24] He races a Mazda MX-5 in club races and owns a race team that competes in the professional Global MX-5 Cup series. [25]

Wilson is the co-host of 'The Throttle Dogs' podcast. [27]

Wilson is an investor in the cryptocurrency Bitcoin. He has appeared on multiple podcasts with prominent Bitcoin podcasters including Peter McCormack’s 'What Bitcoin Did' [28] and Jimmy song’s 'Bitcoin Fixes This'. [29] 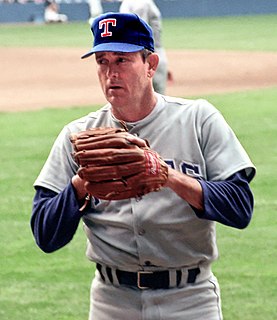 Lynn Nolan Ryan Jr., nicknamed The Ryan Express, is an American former Major League Baseball (MLB) pitcher and sports executive. Over a record 27-year career that included play in four decades, Ryan pitched for the New York Mets, California Angels, Houston Astros, and Texas Rangers. He was inducted into the Baseball Hall of Fame in 1999. After his retirement in 1993, Ryan served as chief executive officer (CEO) of the Texas Rangers and an executive advisor to the Houston Astros.

Kenneth Scott Rogers is an American former Major League Baseball (MLB) pitcher, with a 20-year career for six different teams. He won the 1996 World Series with the New York Yankees over his hometown Atlanta Braves, and played in the 2006 World Series with the Detroit Tigers. In addition to being known for his fielding, he pitched the 14th perfect game in MLB history. In 2008, he was the oldest baseball player in the American League. 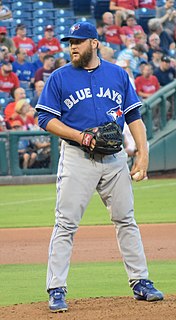 Mark Alan Buehrle is an American former professional baseball pitcher. He played the majority of his Major League Baseball (MLB) career with the Chicago White Sox, playing twelve seasons for the team and winning the World Series with them in 2005. Buehrle also pitched for the Miami Marlins and Toronto Blue Jays. 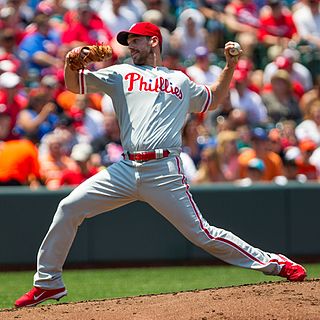 Clifton Phifer Lee is an American former professional baseball starting pitcher. Lee played in Major League Baseball (MLB) for the Cleveland Indians, Philadelphia Phillies, Seattle Mariners, and Texas Rangers. He stood 6 feet 3 inches (191 cm) and weighed 205 pounds (93 kg), while playing. During his school days, Lee played baseball at Benton High School and attended Meridian Community College and the University of Arkansas before being drafted by the Montreal Expos in the fourth round of the 2000 draft.

Ryan Scott Dempster, is a Canadian former professional baseball pitcher, who played in Major League Baseball (MLB) for the Florida Marlins, Cincinnati Reds, Chicago Cubs, Texas Rangers, and Boston Red Sox. Dempster batted and threw right-handed. He was both a starter and a reliever in his career. 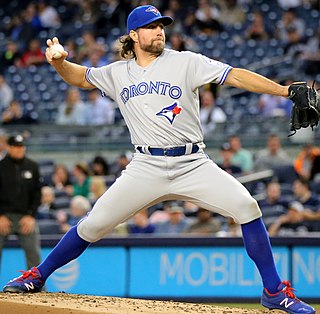 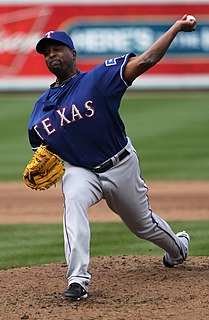 Darren Christopher Oliver is an American former professional baseball pitcher. He is a second generation major league player, as his father Bob Oliver played in the major leagues for 9 seasons between 1967 and 1975.

Christopher Ryan Young is an American baseball executive currently serving as the general manager of the Texas Rangers of Major League Baseball (MLB). He is also a former professional baseball pitcher.

Mark Christopher Lowe is an American professional baseball relief pitcher who is a free agent. He previously played for the Seattle Mariners, Texas Rangers, Los Angeles Angels of Anaheim, Cleveland Indians, Toronto Blue Jays, and Detroit Tigers. His fastball has been clocked as high as 101 mph. He also throws a slider and a circle changeup. 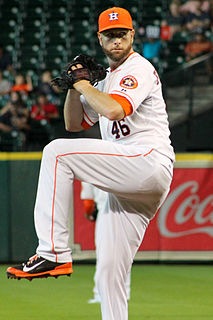 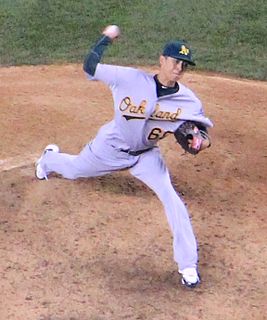 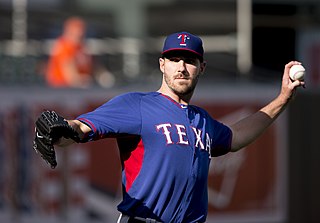 Derek Lane Holland is an American professional baseball pitcher for the Detroit Tigers of Major League Baseball (MLB). He has played in MLB for the Texas Rangers, Chicago White Sox, San Francisco Giants, Chicago Cubs, and Pittsburgh Pirates. He is nicknamed "Dutch Oven".

José Ramón Leclerc is a Dominican professional baseball relief pitcher for the Texas Rangers of Major League Baseball (MLB). He made his MLB debut in 2016 and became the Rangers' closer in 2018.

Luke Thomas Farrell is an American professional baseball pitcher for the Minnesota Twins of Major League Baseball (MLB). He made his MLB debut in 2017 with the Kansas City Royals and has also played for the Cincinnati Reds, Chicago Cubs and Texas Rangers.