Northwind players are selected from the best Canadian-born players from the club teams across Canada.

The team plays in international tournaments, including the Australian Football International Cup and the 49th Parallel Cup.

The Northwind's guernsey has the Maple leaf, the floral emblem of Canada, in the national colours of red and white.

The team formed to participate in the Australian Football International Cup in 2002 (finishing 9th) 2005 (finishing 7th) and 2008 (finishing 6th) as well as exhibition matches against other countries.

Between 1993–1995, the Northwind were undefeated in tests against the British Australian Rules Football League.

Stefan Leyhane, Northwind's Captain (2003–2009) was also the only Canadian recipient of the 2002 International All Star Team.

Northwind's best and fairest player (from the 2005 International Cup) was Paul Loughnane.

Northwind's best and fairest player from the 2008 International Cup was Aaron "Azza" Falcioni.

Northwind had two players named to the 2008 World Team: Emanuel Matata at Ruckman, and Scott Fleming at Forward.

Northwind had one player named to the 2011 World Team: Steve Rutledge.

Northwind had one player named to the 2017 World Team: Eric Klein

The Northwind have competed at the Australian Football International Cup since their first appearance in 2002. The International Cup is a competition where players that are citizens of the countries who are competing are the only players allowed to play (no expatriate Australians are permitted to play, with teams composed solely of amateurs who must be nationals of the country they represent).

Adam Campbell is a former Australian rules footballer for the Fremantle Football Club in the Australian Football League (AFL). He played both centre half-forward and full forward. 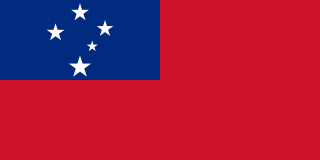 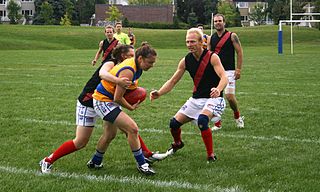 Australian rules football in Japan is a growing team sport which dates back to 1910, but found its roots in the late 1980s mainly due to the influence of Australian Football appearing on Japanese television.

The 2011–12 Sydney Blue Sox season will be the second season for the team. As was the case for the previous season, the Blue Sox will compete in the Australian Baseball League (ABL) with the other five foundation teams, and will again play its home games at Blacktown International Sportspark Sydney. The team will be defending its record from the 2010–11 season where it had the best win–loss record during the regular season.

AFL Europe is the regional governing body for Australian rules football in Europe. As of 2018, it organises the AFL Europe Championship and the Euro Cup, and previously managed the European Legion representative team as well being responsible for the organisation of the ANZAC Cup, Fitzpatrick Cup and AFL Europe Champions League. 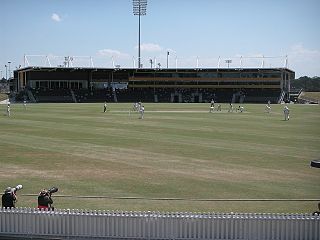 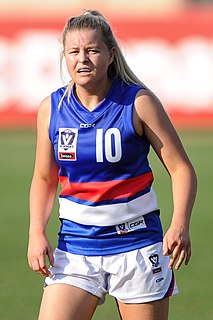 Sarah Jolly is an Australian rules footballer who played for the Melbourne Football Club in the AFL Women's competition. She was drafted by Melbourne with their nineteenth selection and 145th overall in the 2016 AFL Women's draft. She made her debut in the nineteen point win against Collingwood at Ikon Park in round two of the 2017 season. She played the next week in the fourteen point win against the Western Bulldogs at VU Whitten Oval before being omitted for the round four match against Carlton at Casey Fields. She returned for the five point loss to Greater Western Sydney at Blacktown International Sportspark Oval in round five, which was her last match for the year and she finished the season with three games. She was not retained on Melbourne's list at the end of the season and was subsequently delisted in May 2017.

Aliesha Newman is an Australian rules footballer playing for Collingwood in the AFL Women's (AFLW) competition. She previously played for the Melbourne Football Club.

Cheyenne Hammond is an Australian rules footballer who plays for the Gold Coast Suns in the AFL Women's competition (AFLW).