In October 1995, Capone-N-Noreaga appeared in The Source magazine's "Unsigned Hype" column. In 1996, the duo secured a recording contract with Neil Levine's Penalty Recordings. In 1996, before the group’s debut album was completed, Capone was jailed for a parole violation, [2] and Noreaga finished their debut album The War Report , with the help of various fellow New York City hip-hop acts, including Mobb Deep and Tragedy Khadafi. The album was met with critical and commercial acclaim; [3] it also saw the group partake in the conflict between Death Row Records and Bad Boy Entertainment, making it a more widespread East Coast/West Coast rivalry, responding to West Coast hip hop duo Tha Dogg Pound's single "New York, New York", with their own rendition of "L.A L.A".

In 2000, the group released The Reunion , their second album on Tommy Boy Records. The album was similarly star-studded but suffered from mixed reviews. [4] [5] Additionally, Capone had once again been sent to prison before its release for violating a probation sentence on gun possession, [6] which undermined promotion of the album. Soon after, in 2001, Capone-n-Noreaga jumped ship to prominent label Def Jam. As Tommy Boy retained the rights to the names Capone-n-Noreaga and Noreaga, because the company claimed that the duo owed it more recordings, the group shortened its name to CNN, and Noreaga billed himself as N.O.R.E. (or NORE) for his solo work. The duo recorded a new album in 2003, titled New Religion, with a lead single "Yes, Sir," which was issued on mixtapes and promoted with a music video. The single failed to make an impact, and the album was ultimately shelved. A compilation of several tracks was released in 2004, entitled "What Up 2 Da Hood Thugged Out",

Later that year, the duo found itself implicated in a non-fatal shooting between rival hip-hop groups, one of which included fellow Brooklyn-based rapper Lil' Kim, [7] after a chance encounter outside New York radio station Hot 97. Capone-n-Noreaga have denied any involvement in the shooting, for which the group was not charged. [8] In early 2005, Def Jam released Capone from his contract while retaining N.O.R.E.;[ citation needed ] Capone released his solo debut album Pain, Time, and Glory, later the same year.

In 2006, N.O.R.E. brought up the possibility of a Capone-n-Noreaga reunion and a new album. [9] On June 12, 2008, the duo released a mixtape titled Back on That Q.U. Shit. [10] [11] CNN released Channel 10 , their third studio album, on March 17, 2009, referencing the name of a song from their debut album, The War Report. Channel 10 was put together with the assistance of longtime friend DJ EFN. The album's lead single, titled "Rotate", features Busta Rhymes and Ron Browz, and was produced by the latter. American record producers DJ Premier, Havoc, and The Alchemist—among others—also provided production for the album. [12]

In 2010, the duo had teamed up once again to release their fourth album in June. The album, titled The War Report 2: Report the War as a sequel to their debut, was released to slight fanfare. At that point, the duo recalibrated and decided to return to focusing on solo efforts. In June 2011, N.O.R.E. announced via his Twitter account, that the group had disbanded and that he would continue to focus on his solo career. [1] [13] In March 2013, N.O.R.E. and Capone called into radio personality Sway Calloway's morning radio show, to announce they had once again reunited. [14] [15] 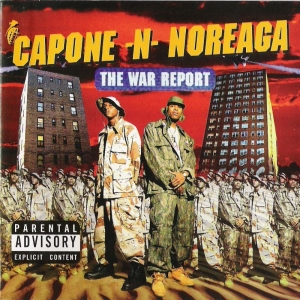 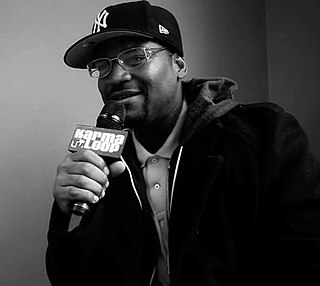 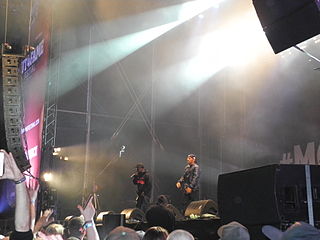 The Reunion is the second studio album by rap duo Capone-N-Noreaga. It is not as critically acclaimed as their first album, The War Report, but did feature a number of well-received tracks, most notably "Invincible," produced by east coast producer/DJ DJ Premier. Because of a manufacturing error, the album was released with two catalog numbers. The album was certified platinum.

Kiam Akasi Holley, better known by his stage name Capone, is an American rapper from Queens, New York. He is best known as one half of the East Coast hip hop duo Capone-N-Noreaga (C-N-N), alongside friend and fellow Queens-based rapper Noreaga. 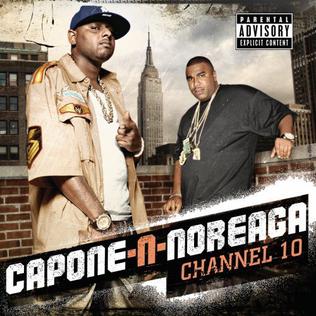 Channel 10 is the third studio album by rap duo Capone-N-Noreaga, released on March 17, 2009. It was the duo's first album in nine years. 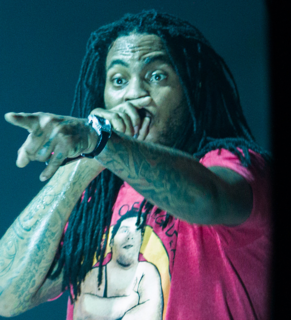 Juaquin James Malphurs, known professionally as Waka Flocka Flame, is an American rapper. Signing to 1017 Brick Squad and Warner Bros. Records in 2009, he became a mainstream artist with the release of his singles "O Let's Do It", "Hard in da Paint", and "No Hands", with the latter peaking at number 13 on the US Billboard Hot 100. His debut studio album Flockaveli was released in 2010. His second studio album Triple F Life: Friends, Fans & Family was released in 2012 and was preceded by the lead single "Round of Applause".

Anthony Johnson better known by his stage name Slim The Mobster is a Los Angeles-based rapper signed to Gang Module Records and formerly Aftermath Entertainment. Slim The Mobster was known as Dr. Dre's new protégé. Johnson's manager is John Monopoly, who ushered in Kanye West's rapping career. His influence includes gangsta rap acts like The D.O.C and The Notorious B.I.G. He took his rap name from notorious pimp Fillmore Slim and from being in the trap having the mindset of a Mobster.

The discography of Waka Flocka Flame, an American rapper, consists of two studio albums, 41 singles and 28 mixtapes. His highest-charting single, "No Hands" featuring Roscoe Dash and Wale, peaked at number 13 on the US Billboard Hot 100.

"L.A., L.A." is a song by American hip hop duo Capone-N-Noreaga, featuring guest appearances from fellow American rappers Mobb Deep and Tragedy Khadafi. It was released in early 1996, as the second single from their debut album The War Report (1997).

DJ EFN is an American record label executive and DJ, based in Miami, who specializes in hip-hop. Since the early 1990s, operating most often under the banner of Crazy Hood Productions, EFN has worked in the hip-hop industry in a variety of capacities, including as a mixtape producer, album producer and A&R consultant, radio host, marketing and promotions specialist, clothing retailer, artist manager, and film producer. He is currently best known as the co-host of "Drink Champs," a weekly podcast carried by Sean "Diddy" Combs's Revolt TV network. 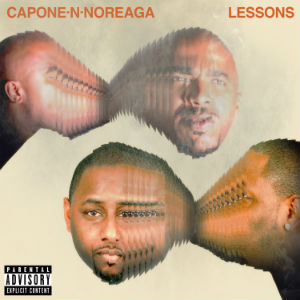 Yves Mondesir, better known by his stage name DJ Whoo Kid, is an American–Haitian Hip Hop DJ. He is currently signed to G-Unit Records and its subsidiary label, Shadyville Entertainment. He is the host of The Whoolywood Shuffle on Sirius/XM Radio Shade 45, and in March 2009. His productions often use a sound clip of shouting his DJ name, with an echo effect. He's had two albums chart on the Billboard 200, XXL Presents: Bad Season with Tech N9ne and The Whoodlum Ball with Smith and Hay and Ranna Royce.

This is the discography of American hip hop duo Capone-N-Noreaga.